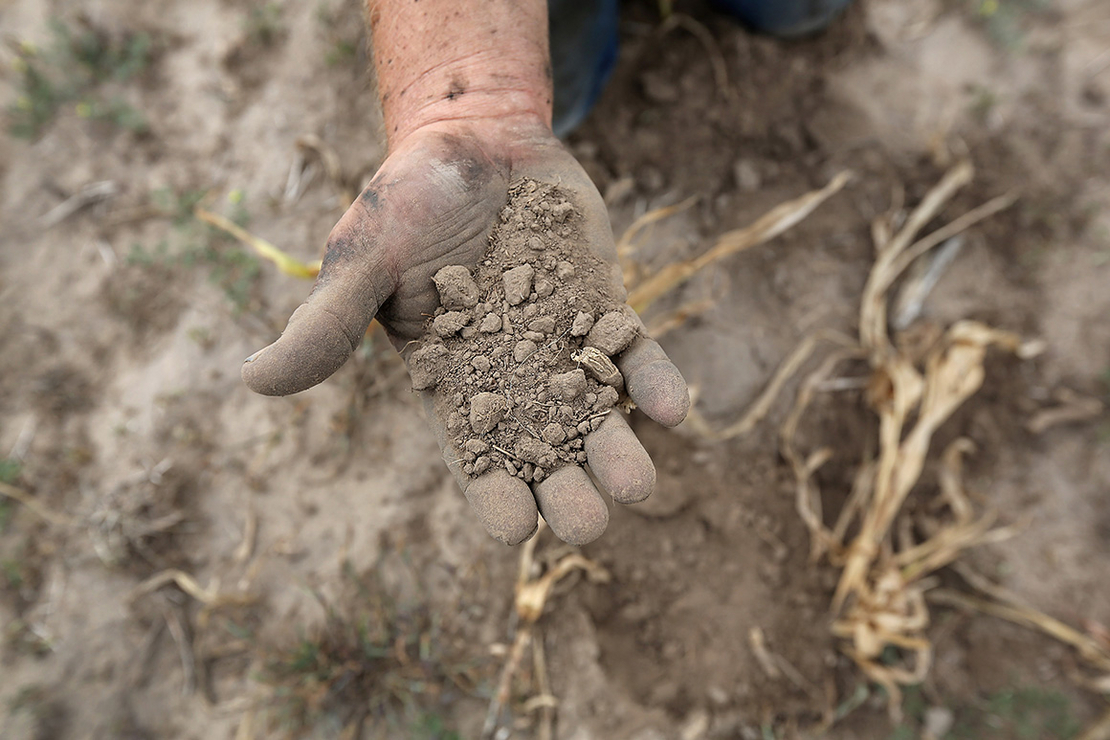 A Kansas farmer in 2012 sifting through arid topsoil under a ruined crop on a family farm dealing with a harsh drought. John Moore/Getty Images

The survey from the University of Illinois showed that American consumers are “more than somewhat worried” about climate change’s effect on food production, supplies and the livelihoods of farmers, just as Congress begins discussions of a five-year farm bill bound to touch on the subject.

Asked to rate their concerns on a scale of 1 to 7, with 1 being not concerned at all, respondents put their concerns about climate-driven food prices at a 5.3, and food shortages and negative impacts on farmers and ranchers at 5, according to the university, which outlined the results on its Farmdoc Daily blog Friday.

The quarterly online Gardner Food and Agriculture Policy Survey reaches about 1,000 people, according to the university, which conducted the initial survey in May.

While the survey indicated widespread worry over climate change generally, results varied from region to region, with the greatest concern in the West and Northeast. Respondents in the Midwest showed the greatest percentage who were not at all worried, at 9.6 percent.

Public sentiment on climate change will be “incredibly important” as lawmakers write the next farm bill, said Lesley Jantarasami, managing director for the energy program at the Bipartisan Policy Center, a centrist think tank that’s pursuing climate-smart agriculture in the farm bill. The last farm bill was in 2018.

Consumer attitudes are reflected in major food companies’ strategies to reduce their greenhouse gas impacts, and climate change is poised to be an important part of the debate over the bill regardless of which party has a majority in Congress when it’s finalized, Jantarasami told E&E News.

“The science has become much stronger since 2018,” she said.

Republicans, especially in the House, have criticized Democrats for their heavy focus on climate change, however, and have sought to pin high food prices primarily on the Biden administration’s economic policies. But groups like the BPC say compromises on climate policy and agriculture can be found.

“We’re all about finding that middle ground,” Jantarasami said.

Sponsors said the survey began as a way to keep track of public opinion ahead of the farm bill, which will reauthorize programs across the Department of Agriculture — and to put a fresh perspective on the related policy debates.

“Discussions of farm policy tend to focus on the farmer perspective and can sometimes exclude the perspectives of the general public. Rarely do we discuss agricultural policies from the perspective of the taxpayer, yet they are an important stakeholder,” researchers at the University of Illinois and Purdue University wrote in the Farmdoc Daily blog earlier this month.

Jantarasami said that while sections of the last farm bill — written by a Republican-led Congress — made references to climate change, the issue will play out more significantly in other parts of the bill this time, through programs on conservation assistance to farmers and potentially increased funding for land grant universities and agriculture extension services.

The survey also showed that 75 percent of respondents were either very worried or somewhat worried about climate change generally, and 7.7 percent said they weren’t worried at all. The survey will continue to monitor public support for a variety of climate change policies, the authors said.