COP 26 explained: What to know about the climate talks 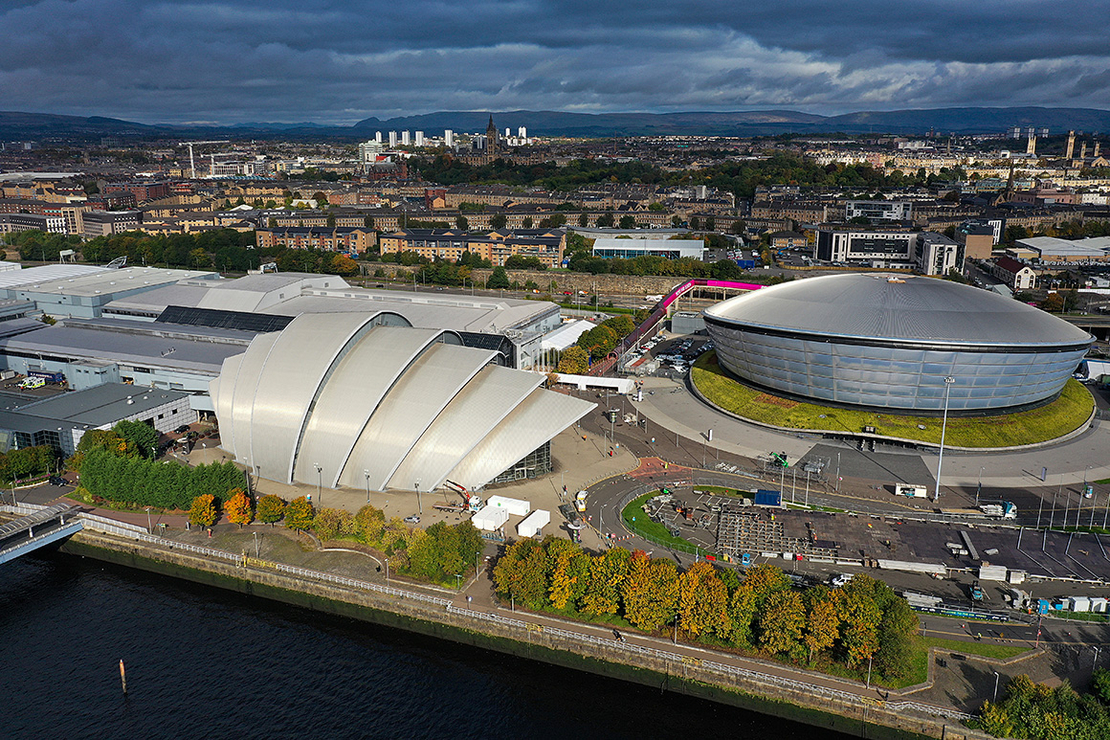 Monday marks the start of talks that will shape the world’s response to climate change over this decade.

Global emissions need to be cut in half by 2030 to stem the acceleration of wildfires, droughts, floods and storms that are already intensifying, according to scientists.

If the world misses its goals, millions of people stand to lose their homes and livelihoods, crops could fail in many parts of the world, and miles of shorelines will disappear underwater.

Those are the stakes facing world leaders as they arrive in Glasgow, Scotland.

It’s a goal that many officials measure in degrees.

“We want to be able to say with credibility, coming out of Glasgow, that we have kept 1.5 within reach,” Alok Sharma, president designate of the conference, known as COP 26, said this week.

Limiting temperature rise to 1.5 degrees Celsius was aspirational when the Paris Agreement was signed in 2015. Now it’s the new consensus.

That shift occurred in 2018 with the release of a U.N. report showing that more warming would usher in a host of climate-related dangers.

That report gave the world until 2030 to achieve that goal, and countries are expected to outline their plans to reach it in Glasgow.

But negotiators won’t be haggling over temperatures. They’ll be focused on promises made — and broken.

“We are very concerned about the ambition level of many of the commitments and pledges that countries have made,” he added, referring to nationally determined contributions. “The 2030 targets, or NDCs, that have been submitted today frankly do not cut it.”

Where we are now

The world has made substantial progress since 195 countries reached their agreement in Paris-Le Bourget Airport on Dec. 12, 2015.

Six years later, policies and market shifts in favor of cleaner forms of electricity have improved the outlook. The United Nations’ updated synthesis report, released earlier this week, showed that the newest round of NDCs puts the world on pace for 2.7 degrees of warming. That’s after 116 countries put forward new or improved 2030 goals.

An assessment by Climate Action Tracker estimates that the newest round of promises would achieve 2.4 degrees of warming.

But that’s only if countries make good on their promises, not all of which are enshrined in domestic policy. Already the world has warmed by 1.1 degrees over the last two centuries. That leaves little room to “keep 1.5 alive,” a slogan that officials have been trumpeting in recent days.

Most of the Paris rulebook, which sets guardrails for implementation, was resolved three years ago during climate talks in Katowice, Poland. But one major piece remains missing.

Known as Article 6, this set of issues governs adaptation and mitigation efforts that transcend national boundaries. This includes international carbon markets that allow countries to finance projects abroad — generally in developing countries — in exchange for credit toward their own NDCs.

Carbon markets offer countries a chance to make emissions reductions more cheaply and with greater flexibility. But they also demand agreement on a host of accounting and transparency norms to ensure that they produce results and don’t undermine the integrity of the Paris Agreement.

“One of the challenges that we face with Article 6 is that getting the rules right on international cooperation through carbon markets is really important, but those rules by definition are very complex,” said Kelley Kizzier, vice president for global climate at the Environmental Defense Fund.

The talks in Scotland will seek to sew up loose ends, including how old credits from projects carried out under the Kyoto Protocol might be counted toward Paris. There are also rules to prevent double counting.

For example, the International Civil Aviation Organization, which has developed its own carbon offsets for the airline industry, has limited credits from the Kyoto Protocol program to those dated 2016 or later.

Meanwhile, voluntary carbon markets have continued to grow over the last two years, spurring greater demand for certainty about the governance of the Paris Agreement markets, Kizzier said.

One certainty in Glasgow is that talks won’t be easy. The Biden administration has been pushing countries to put forth enhanced new targets for reducing their emissions, but China and some other high-emitting nations have bristled.

Those that have strengthened their targets will need to provide details about achieving them.

More finance will be needed, and discussions over how and when it will be delivered are likely to stoke divisions.

Rich countries promised 12 years ago in Copenhagen, Denmark, that they would work together to direct $100 billion a year to poorer countries by 2020. But wealthy nations said earlier this week that they won’t get there until 2023.

Failing to deliver on that measure will make it tough to bring more countries in as donors when even larger contributions begin in 2025.

“Without the U.S. and the U.K. being crystal-clear on their stances, China and India and the other big emitters are going to continue to kick the can,” said Justin Locke, managing director of the Global South program at RMI, a clean energy institute.

“It’s also really unfortunate that the COP is this catchall to solve all these big problems,” he added. “They have to be worked out more incrementally in forums like the G-7 and G-20.”

Leaders of the Group of 20 nations will gather in Rome this weekend to address sticking points on finance for fossil fuels. In Glasgow, there’s also the question of adaptation. The Paris Agreement aims for a balance between finance for mitigation and adaptation projects — particularly in vulnerable countries.

But only around a quarter of current climate funding goes to projects linked to resilience.

And the talks will revisit questions of loss and damage — specifically, what support or compensation might be afforded to vulnerable populations who experience irreversible climate impacts that can’t be adapted to.

More than 300 civil society groups released a letter yesterday demanding that negotiators find a way to pay for climate damages.

“It’s always been sidelined, and we’re at a moment globally that it’s just inescapable the extent of damage climate-vulnerable countries are experiencing,” said Rachel Cleetus, policy director with the climate and energy program at the Union of Concerned Scientists. “This is now at a point where the needs are acute.”

That’s going to be difficult

“What we’re trying to achieve at Glasgow is, in many ways, harder than Paris,” said Sharma, the COP 26 president designate. “After six years, we still have some of the most difficult questions to answer. And we’re effectively in the last half-hour of the exam.”

Complicating the negotiations is the fact that dozens of leaders — most notably Chinese President Xi Jinping and Russian President Vladimir Putin — won’t be there.

President Biden will address the gathering Monday, and his White House team is readying a national climate strategy that it hopes other leaders will see as an assurance of cutting U.S. greenhouse gas emissions in half by 2030.

“In the context of an international climate agreement, the pledges you make internationally are only as good as any domestic laws that back them up,” said Joanna Lewis, director of the Science, Technology and International Affairs Program at Georgetown University.

China has done that over the past week through the release of its NDC, a long-term emissions-cutting strategy and other domestic policy documents.

“That’s constructive if other countries see it that way,” Lewis said. “At least there is more transparency behind the targets and more clarity around domestic policy.”

How China’s ambition is perceived by other countries is important to the tenor of the negotiations, she added. Critics say the updated targets aren’t new and lack details, but the United States hasn’t said how it will meet its targets, either.

Without Xi in Glasgow, there won’t be opportunities for side meetings and private diplomatic wrangling. But China’s top climate official, Xie Zhenhua, will be there, and he and U.S. climate envoy John Kerry have met several times over the past year.

“The overall tension between the U.S. and China has made any kind of engagement on climate change challenging over the last year,” said Lewis. “But it still has happened.”

The Glasgow conference marks the first time countries will come together to show how they’ve responded to the Paris deal’s directive to increase ambition every five years.

Those goals are not aligned at the moment. Some countries say that’s because the goal posts have shifted on finance and on carbon-cutting objectives. Frances Colón, senior director for international climate policy at the Center for American Progress, said that ignores the bigger picture.

“This isn’t about what we want,” she said. “It’s about what the science tells us.”

The very nature of the talks sets them up to fail.

“Global forums are always disappointing because almost all global forums operate by consensus, including the Paris Agreement,” said David Victor, a public policy professor at the University of California, San Diego.

“One of the tensions in Scotland is going to be that the global consensus stuff has a lot of challenges to it, but the facts on the ground are really changing quickly, and the politics are changing quickly,” he added.

The real challenge will come when the talks end. That’s when countries will need to enact policies to meet their targets.

“Whether or not COP 26 is a success may not be known until some years afterwards,” said Kaveh Guilanpour, vice president of international strategies for the Center for Climate and Energy Solutions.

“And I think the reason for that is that Glasgow comes at a pivotal moment of transition, and a transition from the focus being on negotiations to implementation.”