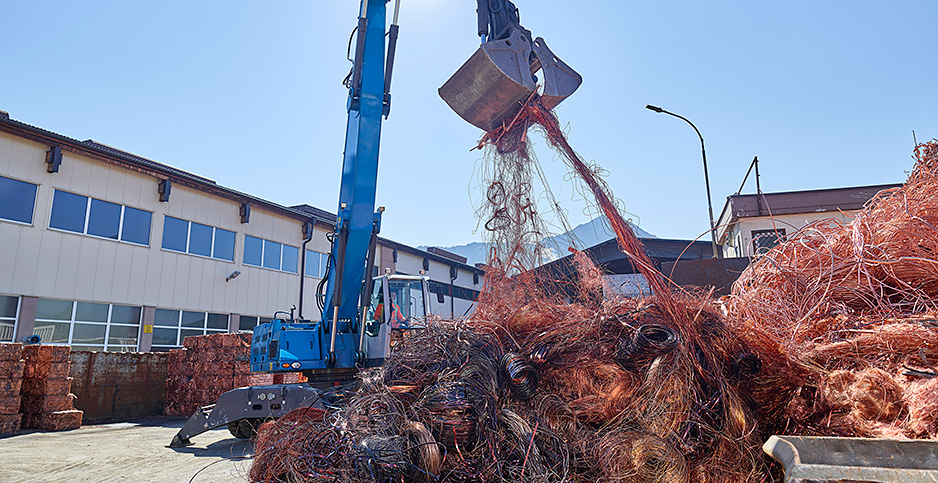 Copper prices reached 10-year highs last month, a rally that analysts say is fueled by economic recovery in China and expectations the red metal will play a central role in the clean energy transition.

Some expect soaring copper demand to outpace supply this decade as major economies embrace electric vehicles and renewable energy. The dynamic could usher in a new wave of environmentally sensitive mining projects or provide a windfall for metals recyclers.

Copper is used in a variety of sectors, including renewable energy, construction, transportation and electronics. The ubiquitous industrial metal is sometimes known as "Dr. Copper" because its price can be a measure of general economic health.

China, which boasted the only major economy to grow in 2020, targeted part of its pandemic recovery on infrastructure, resulting in record amounts of copper imports.

The uptick in demand from China coincided with supply shortages as COVID-19 disrupted many mining operations across the globe. Production at U.S. copper mines fell 5% last year to 1.2 million tons, according to the U.S. Geological Survey.

But analysts say the demand for copper isn’t just framed by the pandemic. They expect demand to surge as part of the shift away from fossil fuels because of the metal’s ability to conduct electricity.

President Biden’s commitment to spending big on green infrastructure has injected enthusiasm into copper markets. So has a projected proliferation of electric vehicles, which use about four times as much copper as internal-combustion vehicles.

In a research note in December, Goldman Sachs economists said, "This current price strength is not an irrational aberration, rather we view it as the first leg of a structural bull market in copper."

From copper to soybeans to iron ore, commodities have enjoyed a sharp rise in prices in recent months. Some have suggested it is the beginning of a commodity super-cycle, or an extended period of high prices.

The "current situation echoes the early 2000s when I became CEO of Freeport at a time when Chinese demand appeared and accelerated in such a dramatic fashion without a supply response," Freeport CEO Richard Adkerson said on the company’s most recent earnings call.

Freeport, which operates a half-dozen mines in the Southwest, told Reuters it could ramp up production in several years through mine expansions.

Other U.S. mining proposals are also racing to come online. Some have faced resistance from Native American tribes and conservationists trying to protect sacred sites and prevent water pollution in sensitive ecosystems.

And in northern Minnesota, Chilean firm Antofagasta PLC has applied for federal permits to mine copper and nickel near the Boundary Waters Canoe Area Wilderness (E&E Daily, Sept. 29, 2020).

Casper Burgering, senior commodities economist at Dutch bank ABN Amro, was skeptical that a super-cycle would materialize but said miners will surely benefit from current prices. And so will scrap metal recyclers.

"What’s not so beneficial for many miners is the long-term trend is showing an increased usage of recycled material," Burgering added.

About a third of the copper supply in the United States comes from scrap, said Joe Pickard, commodities economist at the Institute of Scrap Recycling Industries.

Typically, about half of it is exported. He noted that market dynamics are changing because China has placed restrictions on recycled metal imports.

"Over the course of the year so far, as copper prices have gone up sharply, that incentivizes the use of copper scrap more because copper scrap is more attractive in terms of cost," he said.

Burgering said commodities markets always rely on China. That nation reverts to its dependable economic growth model of investing in construction and manufacturing during times of crisis, he said.

But in the long term, China is "destined" to transform to a consumer-based economy, which could drive down copper prices. He also cautioned that projections about electric vehicles have failed to come to fruition in the past.

Too much of copper’s current high is based on expectations of smooth vaccine rollouts and economic stimulus measures, Burgering said.

"Optimism is not a good basis for these commodity markets," he said. "I think the prices are too high at this stage and there should be some correction coming ahead."