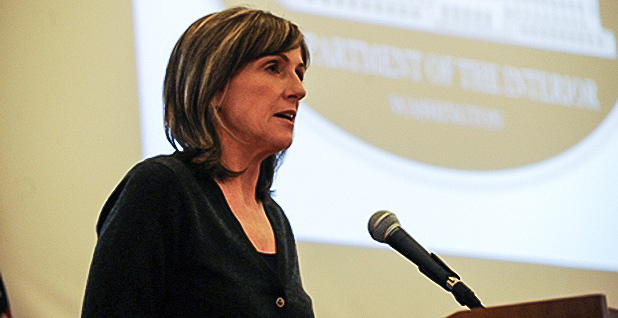 President Obama’s climate czar told lawmakers yesterday to embrace the "Green New Deal," and she later suggested they start by codifying the Obama regulations that President Trump is trying to undo.

"We’re not starting this on a completely empty slate," said Carol Browner, who also served as President Clinton’s EPA administrator.

Browner helped guide Obama’s regulations on emissions from cars and other sources as Senate Democrats failed to pass carbon cap-and-trade legislation in 2010. That allowed Obama to sidestep Congress but left his policies vulnerable to the Trump administration, which is rolling back all his major climate regulations.

"We tried to get a carbon bill. We were not successful, but we looked at our existing laws and we found lots of ways to actually reduce [greenhouse gases]. So maybe go back and codify what Obama’s done, right?" she said after testifying at a congressional hearing on oceans and climate change.

Obama’s rules on auto emissions would be a great place to start, she said.

Browner’s remarks came a few hours after lawmakers unveiled their resolution for the "Green New Deal," which aims to mobilize a massive jobs program to decarbonize the economy while strengthening the social safety net. That’s a more ambitious undertaking than Obama’s Clean Power Plan or corporate average fuel economy standards — but Browner said the details shouldn’t scare off lawmakers concerned about the climate.

"Let’s just take a moment to, like, say this is a good thing. This is a big challenge, and it deserves a big response. A lot of the details we’ll need to work through and sort out, but today’s a good day. We took a big step forward. And it’s only through aspiration and vision that we make progress, so I’m excited," she said.

Rep. Rob Bishop (R-Utah), the committee’s ranking member, advocated for mitigating emissions through better forest management, and adapting to changing weather patterns by building more dams and reservoirs. Those would be cheaper, less disruptive ways of dealing with climate change, he said.

"We put a man on the moon because we committed ourselves to it. There is nothing this country can’t do with innovation and ingenuity," she told lawmakers.