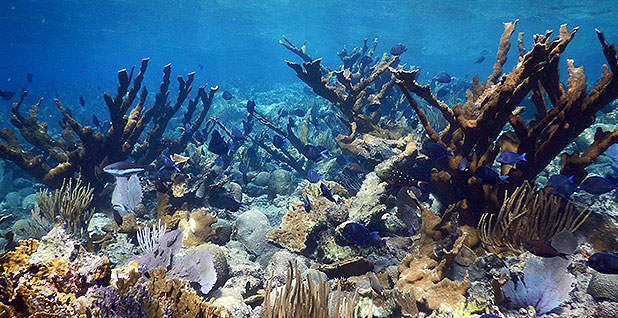 The seafloor in five coral reef tracts has eroded much faster than expected, according to a USGS study. But those in unpopulated areas — like the above reef near the unpopulated Buck Island — fared better. Photo by Curt Storlazzi courtesy of U.S. Geological Survey.

Coastal communities are already losing the coral reefs that help protect them from waves, erosion and hazardous weather, according to a new study from the U.S. Geological Survey.

The study, published today in Biogeosciences, found that the seafloor is eroding far faster than expected in five large coral reef tracts in Florida, the Caribbean and Hawaii. Researchers already knew many reefs have fewer corals, but today’s study is the first to show the widespread effects of that degradation on water depths.

Specifically, water depths are already at levels not expected until almost 2100, said Kimberly Yates, a biogeochemist at USGS who is the lead author of the study. By 2100, they could be eight times deeper than predicted from sea-level rise alone.

"The combination of sea-level rise and erosion on the seafloor makes the water get deeper much faster, and that means we are much more vulnerable to coastal hazards than we thought," she said in an interview with E&E News today.

Yates emphasized that the study looked at reefs that had "very good, accurate and precise historical measurements," enabling researchers to compare that old data with new measurements. Each coral reef is also unique, making it difficult to use a broad brush and apply today’s findings worldwide.

But Chris Langdon, chairman of marine biology and ecology at the University of Miami, said the study’s results indicate that "this is going on in not maybe every reef, but probably in many reefs around the world." They are also consistent with his own research, he said, showing that coral reefs in the same area of the Florida Keys are disintegrating at a faster rate than predicted.

"I think it’s a really important paper. When we talk about degradation of reefs, it’s really important to consider the problem from all different kinds of angles," said Langdon, who was not involved in today’s study. "No one has ever looked at dissolution of the actual physical structure of it."

The idea came to Yates when she was stranded on a research trip to the Florida Keys in 2013.

She had swum away from the research vessel to find a spot to place research instruments. When she waved for the boat to pick her up, the captain refused. His nautical chart showed the area as too shallow.

But Yates was swimming in 12 feet of water. She swam back and got into an argument.

"I actually had to put the captain in the water and swim him over to that location," she said. But the disparity nagged at her. "I thought, we have a real problem here. Either the nautical charts are wrong, or we’re missing something."

Yates recruited her colleague David Zawada to figure out a way to measure the difference in seafloor elevation over time. They settled on a method used by the Army Corps of Engineers to track shifts in shipping channels and other seafloor changes. The study was thus able to look at what Yates called the "whole elephant": seafloor changes across large areas.

Today’s study did not look at the causes of coral reef degradation. But researchers have catalogued the threats in many other papers, from pollution to warming waters to overfishing and development. Other studies have also shown a decline in the number and diversity of corals in reefs around the world.

When corals die, their skeletons dissolve and create sand, adding to the seafloor. But with fewer corals comes less sand — and a seafloor that is eroding as the sea level rises.

Yates and her colleagues found large amounts of erosion. In Maui, the seafloor lost enough sand, rock and other material to fill up the Empire State Building 81 times, according to their calculations. For all five sites, they found that seafloor elevation decreased between 3.5 inches and 30 inches.

Scientists have predicted that seas will rise between 19 inches and 39 inches by 2100 — without taking seafloor erosion into account.

But the news isn’t all bad: Today’s study found less erosion — and, in some cases, seafloor growth — in areas that are protected or far from human populations. Areas around the unpopulated Buck Island in the U.S. Virgin Islands saw some accumulation, as did some protected spots in the Florida Keys.

"There’s a little bit of hope there for potentially ways to reduce this problem," Yates said.