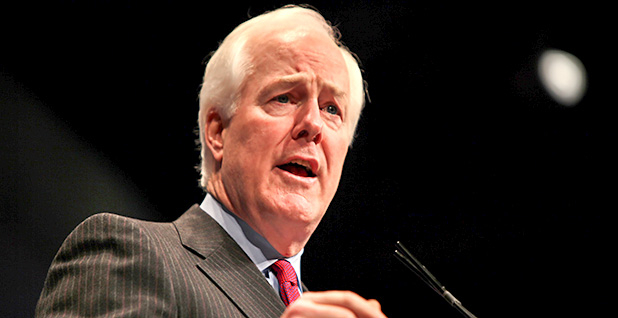 Texas Republican Sen. John Cornyn's possible departure from the Senate could cause a leadership and policy shake-up. Photo by Gage Skidmore, courtesy of Flickr.

The possible exit of Senate Majority Whip John Cornyn (R-Texas) to head the FBI would lead to a leadership shuffle within the Republican caucus, while also opening up key committee slots.

Cornyn, who holds the No. 2 position in Senate Republican leadership after Majority Leader Mitch McConnell of Kentucky, has emerged as a candidate to fill the top FBI job, which opened last week when President Trump fired then-Director James Comey.

Cornyn, a former Texas attorney general and state Supreme Court judge, was one of a handful of candidates who met this weekend with Attorney General Jeff Sessions to discuss the FBI slot.

Cornyn had little to say about the meeting yesterday. "It was a good conversation," he told reporters trailing him as he entered the Senate chamber to speak.

Upon exiting a short time later, Cornyn rebuffed additional questions on the subject. "You know I’m not really talking about that today," said the Texan, who regularly fields questions from reporters on the short walk from the chamber to his office suite.

But should a job offer materialize and Cornyn accept, his exit would have ramifications on the day-to-day operations of the chamber.

For starters, his departure would create an opening for the second-most powerful position in the Senate. Cornyn is term-limited in his current position as whip by GOP caucus rules, so the FBI position may be appealing to him, given that McConnell has given no signs that he intends to step down anytime soon.

The front-runner for Cornyn’s job would likely be Sen. John Thune (R-S.D.), who currently serves as Senate Republican Conference chairman, the No. 3 slot.

That could give renewable energy backers a boost, given Thune’s long-standing advocacy for wind and ethanol, his home-state resources. According to the Center for Responsive Politics, NextEra Energy Inc. — which focuses on renewable sources — was Thune’s second-largest campaign contributor from 2011 to 2016.

By contrast, Exxon Mobil Corp. and Valero Energy Inc. were the second and fifth biggest contributors to Cornyn for the same period, during which oil and gas companies represented the Texan’s second largest source of industry giving.

Kevin Book of ClearView Energy Partners said Thune has "voiced more explicit support" for biofuels and agricultural issues over his career than Cornyn has for his home-state energy interests, raising the possibility that as whip, "he could potentially advocate more for renewables than Cornyn did for fossil fuels."

"He’s supremely qualified, obviously from a law enforcement standpoint," Thune said. "He’s got good relationships on both sides of the Hill up here."

However, should Thune get a promotion to majority whip, it appears he may have to give up the chairmanship of the Commerce, Science and Transportation Committee — a plum assignment given the panel’s broad jurisdiction.

Senate Republican rules do not allow for the top two members of the conference to serve as chairman or ranking member on standing committees.

While there are many factors that could be in play in any potential gavel shift, Sens. Roger Wicker of Mississippi and Roy Blunt of Missouri are the next two Republicans in line in terms of seniority behind Thune on the panel. Neither senator currently chairs a full committee.

Additionally, Cornyn sits on both the Finance and Judiciary committees. An opening on the tax-writing panel would likely be a major draw for Republicans, given efforts to overhaul the federal tax code.

Should Cornyn be tapped to lead the FBI, his nomination would likely further inflame tensions with Senate Democrats, who would prefer to see a nonpolitical figure lead the bureau rather than a seasoned political operative such as Cornyn, who formerly led the National Republican Senatorial Committee, the party’s campaign wing.

Some Republicans have also expressed concerns about the possibility of a sitting or former member of Congress, such as Cornyn or former Rep. Mike Rogers (R-Mich.), who chaired the House Intelligence Committee, filling Comey’s shoes.

"I think it’s now time to pick someone who comes from within the ranks or has such a reputation that has no political background at all that can go into the job on day one," Sen. Lindsey Graham (R-S.C.) said on "Meet the Press" over the weekend.

Democrats have also said they want to see a special prosecutor named to continue investigating Trump’s ties to Russia before confirming a replacement for Comey. While they have limited ability to outright block any nominee, given recent rule changes allowing nominees to be confirmed by a simple majority, the growing Russia controversy appears to be on the verge of completely overshadowing the legislative agenda.

"They need to understand that the drip drip drip of connections between Trump and the Russian government is going to continue," Murphy said. "And they are much better getting out front with a special prosecutor."