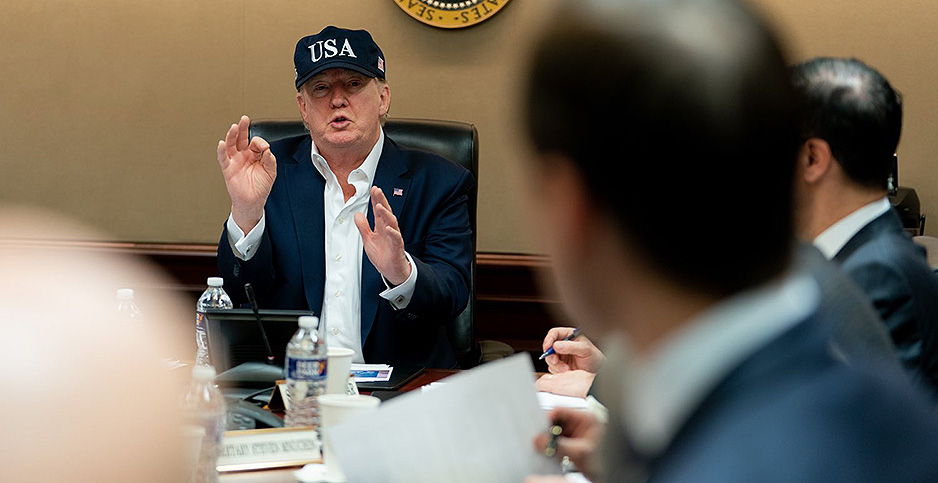 The Federal Emergency Management Agency is facing a major test of its capacity as it begins responding to the novel coronavirus while facing dozens of ongoing disasters and potential major flooding from rivers and lakes across the United States.

FEMA has been playing a secondary role so far with the coronavirus pandemic, acting in support of the Department of Health and Human Services, which leads the federal response.

But that could change quickly if states find themselves overwhelmed and begin asking FEMA for billions of dollars in emergency aid or for disaster workers to help deal with the virus, which causes COVID-19 and has infected more than 3,000 people in 49 states and killed at least 61.

"Given the evolving nature of this pandemic, this could present a significant challenge to FEMA," Daniel Kaniewski, the agency’s deputy director from September 2017 to January 2020, said yesterday in an interview.

President Trump encouraged states to seek extensive FEMA aid, saying Friday that he would "expeditiously consider any such request."

The coronavirus threatens to become FEMA’s biggest challenge since the hurricane season of 2017 overwhelmed the agency and left it unable to deal adequately with the catastrophic flooding, power outages and destruction in Puerto Rico, Texas and the U.S. Virgin Islands.

FEMA has stepped up its response to the coronavirus since Friday, when Trump declared a national emergency, which makes every state, territory and American Indian tribe eligible for limited help from the agency.

The records also show that FEMA soon will pull disaster-relief workers out of Oklahoma and South Dakota, where they have been helping with recovery from storms that damaged the states last spring. Agency spokeswoman Lizzie Litzow said the decision was not related to the coronavirus.

The moves come as FEMA continues to struggle with staffing shortages and a growing number of natural disasters, driven in part by climate change. FEMA repeatedly has been spread thin and has struggled to deal with catastrophic events such as Hurricanes Harvey, Irma and Maria in 2017.

Yesterday, FEMA had nearly 5,300 disaster workers deployed at 42 disaster sites across the United States, agency records show. Those numbers are likely to grow because FEMA is evaluating nine recent requests for disaster aid from states and tribes hit by major storms and flooding this winter.

In addition, the nation’s largest lakes and rivers are either flooding or in danger of flooding because of excessive precipitation since late 2018. The National Weather Service projects widespread flooding in the next three months in the central and southeastern United States, particularly along the Mississippi River and the Great Lakes.

But the real threat to FEMA is the coronavirus epidemic that is sweeping the country — and Trump’s encouragement for states to seek FEMA help.

Under Trump’s declaration, states, territories and tribes can get FEMA to pay 75% of their costs for providing emergency protection related to the coronavirus. Activities eligible for FEMA money typically include law enforcement and activating state emergency operations centers or National Guard troops.

FEMA databases show that nine states and one territory have been approved for the FEMA reimbursement. The areas are California, Florida, Hawaii, Illinois, Maryland, Massachusetts, New York, Oregon, Washington and the Virgin Islands.

But more significant than what Trump approved on Friday is what he said in a letter that day to key administration officials, including the head of FEMA.

For states to receive an expansive package of FEMA aid, a governor would have to request — and Trump would have to approve — that a state be declared a "major disaster." A declaration would give a state a wide range of FEMA help, including reimbursement for damage to public facilities and infrastructure and potentially emergency grants to individuals who have lost jobs or homes.

Trump’s letter Friday strongly hinted that he would approve governors’ requests for "major disaster" declarations under a federal law known as the Stafford Act.

"After careful consideration, I believe that the disaster is of such severity and magnitude nationwide that requests for a declaration of a major disaster … may be appropriate," Trump wrote in a letter. "I encourage all governors and tribal leaders to consider requesting federal assistance under this provision of the Stafford Act, pursuant to the statutory criteria. I stand ready to expeditiously consider any such request."

Kaniewski, the former FEMA deputy administrator, said if Trump declares a state a "major disaster" area, "there could be hundreds or thousands of FEMA staff in the state, supporting that state’s needs. They could be there for a long time."

FEMA’s ultimate response to the coronavirus "will depend on how big the resources requirement is from the states," said Kaniewski, who is now a managing director at Marsh & McLennan Cos., a professional services firm that offers risk management.

A disaster declaration for a state dealing with the coronavirus could be unprecedented.

One notable exception occurred in 2000, when the agency helped New York and New Jersey deal with an outbreak of West Nile virus. But FEMA’s help was limited — it gave the two states just $9 million combined, agency records show.

Members of Congress grilled FEMA Administrator Peter Gaynor at a congressional hearing Wednesday about whether the agency was prepared for the coronavirus.

"We need to do a better job in telling people who we are so they want to join our ranks," Gaynor said. "We’re working hard at it to make sure we double down on how we recruit, where we recruit and how we retain people. It is important to our mission. We can’t do it without people."

"Today, I have enough personnel to respond to anything in the United States," Gaynor said Wednesday, adding that FEMA has "a challenge on the recovery side" that involves rebuilding communities after major disasters.

About 30 FEMA officials were working on the coronavirus with the Department of Health and Human Services, Gaynor told lawmakers.

FEMA has activated a center in New England and in its regions covering the Pacific Northwest, the West Coast and the south-central United States.

One area in which FEMA appears stable is money.

The agency had $35.3 billion available for disaster recovery, according to a monthly report it published March 6. Congress and Trump have approved billions of dollars in emergency funding for FEMA in recent years.

"We are healthy when it comes to dealing with all the disasters that are on the books and the next coming hurricane season," Gaynor said Wednesday.