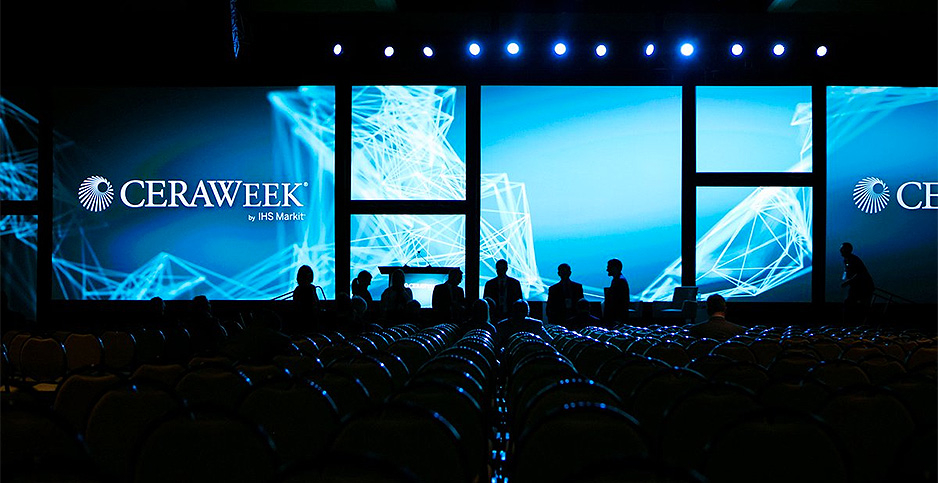 CERAWeek, originally scheduled for this month in Houston, is being canceled for the first time ever because of concerns over the COVID-19 virus. @CERAWeek/Twitter

Big Oil CEOs, Cabinet officials and international dignitaries won’t gather in Texas next week for one of the world’s top energy conferences after organizers took the unprecedented step of canceling the event yesterday amid growing concerns about the COVID-19 virus.

CERAWeek by IHS Markit was set to run March 9 to 13 in Houston as the 39th installment of the conference, which gives leaders a venue to discuss everything from oil to renewables. Instead, it’s the first CERAWeek ever to be canceled — and a sign of the turbulence and uncertainty facing the energy industry and global economy because of a virus that has reportedly killed close to 3,000 people.

Fear surrounding the virus is continuing to disrupt activity — and markets — in the United States and abroad. In Japan, officials reportedly barred many people from running in the Tokyo Marathon, and in Switzerland, this month’s Geneva International Motor Show was canceled. In the United States, Facebook Inc. canceled an annual conference for web developers over fears the virus would spread, while Microsoft Corp. opted not to attend a separate event for gamers. CNBC reported last month that over 200,000 airline flights worldwide had been canceled and that American Airlines Inc., Delta Air Lines Inc. and United Airlines Inc. stopped service to mainland China and Hong Kong.

Such low prices directly affect what oil and gas companies will see in revenues and profits, and they steer what projects will or won’t receive funding.

The virus’s effect could last for another couple of months, Lipow said.

‘Too bad’ but ‘laudable’

The theme of this year’s CERAWeek, whose name is derived from the former Cambridge Energy Research Associates, was supposed to be "Waves of Change: Charting the Energy Transition."

The event was going to focus on "understanding an era of transition that is complex, consequential and reshaping the assumptions and strategies of companies and governments around the world," Yergin, who’s also vice chairman at IHS Markit, said in a Thursday statement.

CERAWeek’s attendance last year topped 5,300, according to Marn. "We are currently tracking on pace with 2019 in terms of registrations," Marn said in a Friday statement.

"Sorry to see this, but the right thing to do," tweeted Jason Bordoff, a former aide in the Obama administration who teaches at Columbia University’s School of International and Public Affairs. Columbia was expected to have a presence at CERAWeek.

While he hadn’t planned to attend, Kevin Book, managing director of research at ClearView Energy Partners, had a similar reaction.

"That is too bad, but a laudable safety-first choice," Book tweeted. "Also probably one with predictive value. This is looking more and more like an ‘asterisk year.’"

"With today’s better, albeit still-imperfect energy data collection, today’s asterisks seem more likely to signify outliers, like the demand collapse after the 9/11 attacks (although also a war by some definitions) and the Great Recession (atypically steep)," he said. "In this case, however we may be in for both."

"Please be safe and please make sure as we go through this coronavirus that you all protect yourself," Pat Vincent-Collawn, CEO of New Mexico-based PNM Resources Inc., told analysts and investors on her electric company’s Friday earnings call.

The remarks came as he and acting Homeland Security Secretary Chad Wolf were asked about the Trump administration’s response.

For example, scientists are using Argonne National Laboratory’s advanced photon source — an X-ray light source — to determine the structure of proteins from this virus and similar coronaviruses almost down to the level of individual atoms, which the official said "should provide insight into potential attack points." They also are using Summit, the world’s fastest supercomputer at Oak Ridge National Lab, to model the proteins in the virus and predict existing medicines that might work against it.