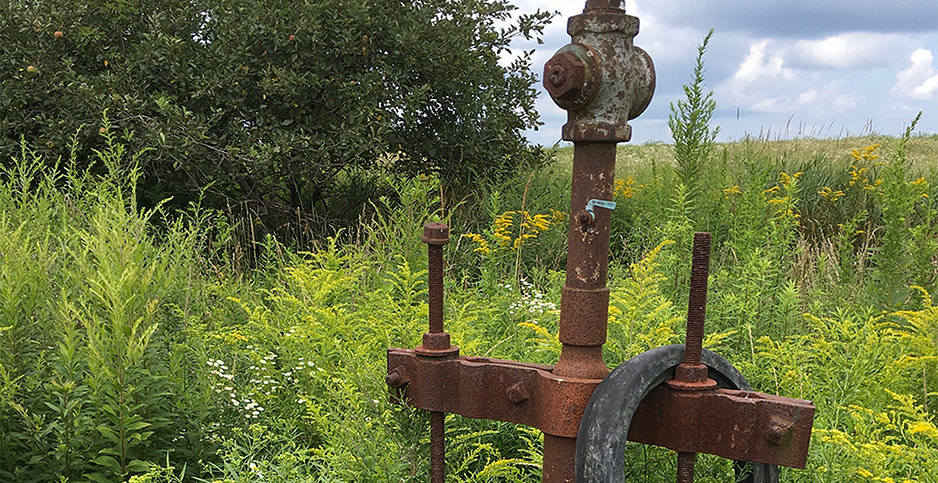 A legacy oil and gas well in Pennsylvania. Pennsylvania Department of Environmental Protection

In the wake of the COVID-19 pandemic that’s shaken the global oil sector, oil states fighting to restart their economies may face another kind of crisis: orphaned wells.

The pandemic could add thousands of wells to already-strapped programs to reclaim old oil infrastructure in the West and Appalachia. Some states have cleanup programs and funding streams dating from previous orphan well crises. Others don’t. Most are expecting their numbers to go up.

"There is no way to put a hard number on it, but we know it’s coming," said Patrick Courreges, communications director for the Louisiana Department of Natural Resources. "We are fully expecting to see another big wave."

Louisiana plugs about 180 orphaned wells a year, paid for from a tax on industry. The state’s current count, however, is 4,000.

There are more than 3 million abandoned wells pockmarking the country today, from Louisiana’s coast to backcountry Kentucky to Wyoming’s high desert (Energywire, May 20, 2019). Orphans are wells that have no ties to a solvent company or responsible party, and so their cleanup falls to the state or federal government. Costs range from the thousands to, in some instances, millions per well (Energywire, Nov. 7, 2019).

In Ohio, an orphan sits in the center of a major freeway being built outside Cleveland and must be plugged before construction. Outside of Pittsburgh, a man smelled gas and dug up his backyard, finding an 1,800-foot-deep well from the early 1900s, covered with a plastic bucket.

These holes were punched during oil and gas booms and left behind when wells dried, or prices fell and companies went bust. Some are fairly harmless, but some are risky, already leaking toxins or natural gas.

Even before the recent oil price dive, these wells represented a burden, both in terms of cost and manpower. The depression in the oil business, caused by an oil glut and unprecedented drops in demand due to the pandemic, threatens to increase that weight.

In Pennsylvania, the state’s chief oil and gas regulator, Scott Perry, warned the Pittsburgh Post-Gazette in April of a "looming crisis." As he saw it, conditions were ripe for "a mass abandonment of wells."

Those conditions include the price of crude falling to negative $37 briefly last month — a first in the global commodity’s history — on fears that the world was running out of storage for an oversupply of oil.

Despite production cut promises and recent optimism that the United States may ease social distancing measures, the value of drilling and producing oil has tanked, driving a hectic search for policy answers.

Gulf state politicians have called for royalty cuts, while others support the Department of Energy’s proposal to buy billions of dollars’ worth of oil for the Strategic Petroleum Reserve.

Wyoming temporarily cut the conservation tax that operators pay, a funding stream that also pays for its orphan well program. The state Legislature, closing the 2020 session just as the full impact of COVID-19 on the oil sector was becoming clear, passed a tax cut that kicks in when the rolling 12-month average of crude is under $50 a barrel.

Even the federal Bureau of Land Management, fearing that companies cannot make money from their wells at current prices or cannot keep employment at a level to continue production, offered guidance last month on how to apply for royalty relief or suspend leases.

"The BLM shares operators’ concerns that premature abandonment of a substantial number of these wells on Federal leases will mean the immediate loss of the oil, which these wells now produce, and the potential loss of their remaining recoverable reserves," BLM wrote.

It’s unclear how the current downturn will affect idle wells on federal land.

BLM has been frequently criticized for its handling of orphans, flagged by the Government Accountability Office multiple times due to its process for tracking wells that go idle and for lacking sufficient bonds. Last year, GAO reported that 84% of bonds for federal oil and gas development were probably insufficient to cover cleanup costs.

BLM has said it is working to increase bonding in cases where it is insufficient or there are signs of company distress.

Frank Rusco, director for natural resources issues at GAO, said the downturn may be a chance for BLM to do just that. As wells and assets change hands via mergers, buyouts and bankruptcies, the federal government can use that point of exchange of leases to demand additional financial assurances for cleanup, he said.

In states, experts note that the pandemic’s fallout is likely already prewritten in existing rules and programs.

New Mexico, for instance, would likely be much more vulnerable to orphans had it not changed its bonding regulations two years ago, said Adrienne Sandoval, New Mexico Oil Conservation Division director. The state increased its bond requirements and assesses a single bond on inactive wells, which helps flag those more likely to be abandoned.

The state is prepared for what happens, she said — but what happens will depend on the length and depth of the oil downturn.

"I don’t have a crystal ball in terms of how long this is going to last," Sandoval said. "When prices are low, there is always an increased potential for bankruptcies to occur and wells to become orphaned and the state to be forced to manage those assets."

Bob King, an oil and gas consultant in Wyoming and the architect of the state’s orphan well program, said bonding required for idle wells in Wyoming during the coal bed methane bust — a downturn in natural gas prices that led to thousands of wells being unloaded onto financially weak companies in the 2000s — likely pushed a number of companies out of business and increased the number of orphaned wells for the state, he said.

But King said Wyoming is now well-placed to deal with busts because of those regulations. The state is sitting on about $150 million in idle well bonds. Similar to New Mexico, well operators are charged on wells that are not producing.

King also said he doubts the pandemic will cause an orphan well crisis, having witnessed former big downturns like the coal bed methane bust or the mid-’80s price crash.

"Rather than companies walking out of the state in mass, you’ll see consolidation," he said. "Companies might merge. I don’t think you are going to see them pack up and leave all their assets behind."

Some are more pessimistic about the state of oil.

Even before the recent price dive, some analysts said risks ran deep in certain parts of the oil patch (Energywire, Oct. 22, 2019).

Reuters reported last week that Chesapeake Energy Corp., the driver of the hydraulic fracturing and long lateral drilling boom, is preparing for bankruptcy.

"The theory here that a lot of people are operating under is that the oil and gas sector was in pretty good financial health," said Clark Williams-Derry, an energy finance analyst at the Institute for Energy Economics and Financial Analysis. "That’s not right at all. The shale industry has been struggling mightily for years."

The structural weaknesses in the shale business are a "perfect storm" for a cleanup crisis, he said.

The liberal Center for American Progress has suggested the creation of a $2 billion orphan well cleanup fund that could create between 14,000 and 24,000 jobs.

Courreges, in Louisiana, said he was less worried about the big-name companies. In Louisiana, smaller companies have low-performing wells that make a profit only in aggregate. That means a lot of wells are abandoned if they go under.

"For all people talk about Big Oil, they tend to not be a problem," Courreges said. "The marginal folks, God bless them, they work hard, but if they get in trouble, they don’t have that reserve."

Correction: An earlier version of this story misstated how Bob King viewed Wyoming’s regulatory impact to oil and gas companies during the coal bed methane bust: Operators were unable to pay existing idle well bonds required by the state, which contributed to their insolvency.