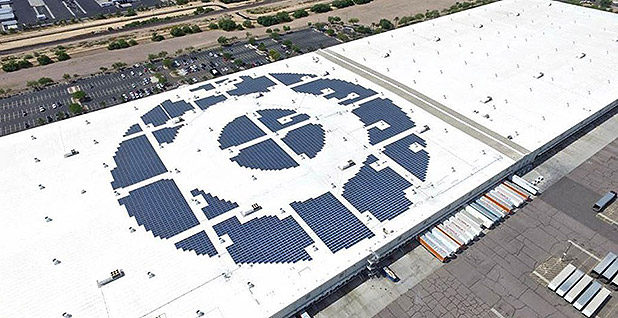 This solar array in the shape of a Target logo on an Arizona distribution center is emblematic of growing demand for direct access to renewable energy among large corporations. In some states like Missouri, however, companies cannot contract for wind and solar energy from non-utility projects or they are prohibited from doing so because of legal uncertainty. Photo courtesy of Target Corp.

When a group of lobbyists visited Jefferson City, Mo., in March to brief lawmakers on a bill to expand wind and solar energy, the visit represented a paradigm shift underway in the electric sector in Missouri, a deep red state where coal still rules.

This gathering wasn’t advocates huddling with Democratic allies about policies to promote clean energy. The group included representatives from two of the nation’s largest companies, Wal-Mart Stores Inc. and General Motors Co., and a right-leaning Washington think tank talking to lawmakers about a proposal known as the "Missouri Energy Freedom Act."

H.B. 439 would let large commercial and industrial utility customers contract for renewable energy built and operated by third-party developers. And it comes as the nation’s largest companies increasingly see renewables as the path to meeting ambitious environmental goals and cutting energy costs.

The trend is documented by numerous reports citing the uptick in corporate demand for wind and solar energy and how access to carbon-free power factors into decisions about where to site warehouses and data centers (Energywire, Oct. 4, 2016).

A PwC survey of large U.S.-based renewable energy buyers last year showed that more than 70 percent were planning additional purchases and doing so in a variety of ways. The most popular mechanism, both for on-site renewables such as rooftop solar arrays and off-site projects such as wind farms, were power purchase agreements (PPAs), according to the survey.

For many large companies, direct purchases through PPAs, either physical or financial, have replaced purchases of renewable energy certificates (RECs) or carbon offsets as a preferred way to meet sustainability goals because they help spur development of new wind and solar, said George Favaloro, managing director of PwC’s sustainability practice.

Along with that "additionality," renewable purchases can help reduce energy bills thanks to falling prices for wind and solar energy and providing a hedge against future cost increases, Favaloro said.

Such is the motivation driving a group of companies pressing for more direct access to wind and solar energy in Missouri.

Take Bentonville, Ark.-based Wal-Mart, which is deploying green energy in every form to power its 5,300 stores and 120 distribution centers and other U.S. facilities. The company has hundreds of rooftop solar arrays, dozens of fuel cells, even a 1-megawatt wind turbine at a California store and its own energy marketing company, Texas Retail Energy LLC, to procure renewable energy in deregulated states, including Illinois.

The effort is aimed at helping Wal-Mart achieve updated sustainability goals announced by CEO Doug McMillon last fall. They include cutting emissions 18 percent and getting half of its energy from renewables by 2025.

While it’s easy for Wal-Mart to add green energy in deregulated states like California or Texas, it’s even making headway in states with vertically integrated utilities.

A recent example is Alabama, where regulators last year approved a 15-year solar PPA between Wal-Mart and Alabama Power for output from a 72-MW solar farm (Energywire, Nov. 4, 2016).

"It’s a fairly massive deal and in a state that isn’t necessarily known for being friendly to renewables," said Steve Chriss, Wal-Mart’s director of energy and strategy analysis.

The arrangement is the type of deal that Wal-Mart and other large companies would like to replicate in other states, like Missouri, where demand for wind and solar among the largest energy users is outstripping the ability of utilities to provide it.

Wal-Mart, which operates 156 stores and four distribution centers in Missouri, has been at the forefront of the push, too, because the company sees opportunity to add solar panels on its rooftops or enter long-term agreements for wind energy from projects in the state or neighboring states like Kansas and Iowa.

But the retailer is required to buy energy from monopoly utilities, which have yet to offer commercial and industrial customers an option to sign long-term contracts for wind or solar energy.

Rooftop solar is an option for some big box operators, warehouses and data centers. But there’s legal uncertainty around the ability of companies to enter contracts with third-party developers. And some corporate buyers, like Wal-Mart, aren’t interested in paying for solar arrays upfront and being responsible for maintaining them.

"We use our capital for business expansion," Wal-Mart’s Chriss said. PPAs, meanwhile, are a better vehicle for on-site solar projects because they "properly put the risk on the developer."

Ryan Hodum, a vice president at Arlington, Va.-based David Gardiner & Associates, a clean energy consulting firm that has been working to advance H.B. 439, said the bill would clarify that corporate energy users could legally buy solar energy from a third-party provider. The measure would not, however, diminish the role of the utility or the grid, he said. Companies that self-supplied some of their energy through PPAs would still pay their share for maintaining the grid.

The bill would provide the Missouri Public Service Commission with rulemaking authority. Electric providers would file a tariff within 60 days that would break out the costs of providing electric service.

The measure would also offer consumer protections, including a cap on participation of 3 percent of a utility’s peak load. It would also give the PSC the ability to restructure tariffs to prevent cost-shifting to other customers.

While supporters said they’ve tried to address utility concerns, the bill has gone nowhere. With the General Assembly set to adjourn today
, H.B. 439 didn’t even get a hearing by the House Utilities Committee, which is led by state Rep. Rocky Miller (R), who has sponsored a number of utility-backed bills in recent years.

Miller didn’t respond to phone and email messages seeking comment on the bill.

But the group has made clear its reservations and said it may be unnecessary because utilities are moving forward with community solar and solar partnership programs that would achieve the same goals.

Davis said H.B. 439 also "appears to create an opportunity for large customers to acquire power from other regions without necessarily paying their fair share for the costs of the grid needed to serve them," and that could unfairly increase prices for other customers. None of the advocacy groups working on behalf of residential and small business ratepayers has stepped up to support the bill, he said.

This year was the third year a bill in Missouri that would allow direct corporate access to renewable energy has been filed.

Backers acknowledge that it has been slow to gain traction, but they say that isn’t surprising, given opposition by utilities and the push by those same companies to advance another major bill to overhaul the ratemaking process. But, supporters say, momentum behind H.B. 439 is growing, even if slowly.

In February, seven companies signed onto a letter to Missouri legislative leadership backing the bill. The companies include Wal-Mart, GM, Target Corp., General Mills Inc., Nestlé SA, Procter & Gamble Co. and Unilever NV. The Army, which has its own 25 percent renewable energy requirement, signed a separate letter of support. So did the wind and solar trade associations and renewable developers NRG Energy Inc. and Invenergy LLC.

"The coalition is growing slowly, and the broader narrative about support for renewables is permeating," Hodum said.

It’s a narrative that in Missouri and many other states is turning the politics of energy on its head.

At the national level, the trend toward corporate demand for renewables runs counter to the Trump administration’s belief that Obama-era regulations and state and federal mandates and subsidies have tilted the scales in favor of clean energy over coal and nuclear power.

And in the reddest of states, like Missouri, where the GOP has a supermajority and controls every statewide office, the push for clean energy is increasingly being driven by the right.

In a shift from a decade ago, when environmentalists successfully pushed a measure that led to Missouri’s renewable energy standard, H.B. 439 is sponsored by state Rep. Bill Kidd, a dyed-in-the-wool conservative from Independence, Mo.

An ordained Christian minister, Kidd on his website defines his core political beliefs as defending the sanctity of human life and religious freedom. He’s a National Rifle Association member. He shares core conservative beliefs in less government and fewer regulations and taxes.

Among the group who traveled to Missouri to lobby for Kidd’s bill this spring was Josiah Neeley, a senior fellow at the right-leaning R Street Institute, a free-market group.

"The new argument is, should we get government out of the way?" Neeley said.

And while advocates at Renew Missouri and environmentalists likewise support H.B. 439 as a pathway to advance wind and solar development in Missouri, there’s little disagreement that R Street’s message is more likely to resonate with the Republican majority in Missouri’s General Assembly.