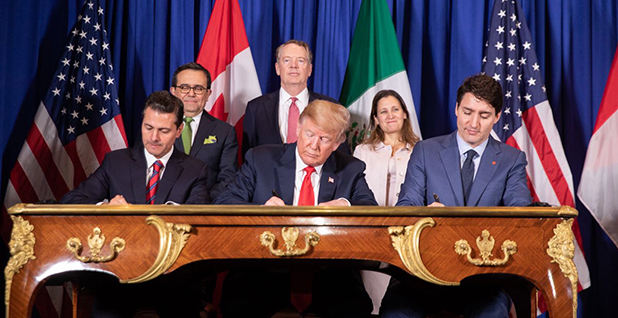 President Trump signed a new trade deal with the leaders of Canada and Mexico in Argentina this morning. @Scavino45/Twitter

A last-minute scramble by Republicans to secure a lame-duck vote on the successor treaty to the North American Free Trade Agreement (NAFTA) is expected to fall short, raising new doubts over the viability of the sweeping deal in the Democratic House next year.

The president signed the deal this morning with the leaders of Canada and Mexico at the Group of 20 summit in Argentina. But it’s unclear when the administration will submit the deal or implementing legislation to Congress for approval.

Under fast-track trade authority, Congress can pass the deal by simple majorities in both chambers but must first submit the text of the agreement to lawmakers. Led by Sen. Pat Toomey (R-Pa.), a handful of Republican senators last week urged President Trump to do so by the end of today, which they said could allow for passage in the current Republican-led Congress.

"We are concerned that if the administration waits until next year to send to Congress a draft implementing bill, passage of the USMCA as negotiated will become significantly more difficult," wrote the Republicans.

Toomey yesterday conceded that long-shot strategy was unlikely to work, noting that a 30-day mandatory delay before the House could vote on implementing legislation would mean lawmakers would have to return after Christmas to vote.

The delay will hand Democrats more leverage in shaping implementing legislation in the next Congress, which doesn’t bode well for key industry-backed provisions, including the contentious investor-state dispute settlement (ISDS) process.

The draft deal struck this summer would retain but scale back the ISDS provisions contained in NAFTA, which allow multinational companies to challenge environmental and other safeguard protections in tribunals. Retention of ISDS was a top priority of U.S. energy interests but is soundly opposed by environmentalists (E&E Daily, Aug. 28).

In one famous case, TransCanada Corp. filed a $15 billion complaint against the U.S. government over President Obama’s rejection of the Keystone XL pipeline. That case was later dropped after Trump moved to allow the project to proceed.

Major environmental groups cited the retention of ISDS for oil and gas companies dealing with Mexico as one reason why they’ll oppose USMCA.

"The deal takes a step forward in curtailing corporate rights, but then uniquely grants those rights to history’s biggest climate polluters, while guaranteeing corporations an additional avenue to weaken environmental protections," wrote the Sierra Club, the League of Conservation Voters and other green groups.

They’re expected to find a receptive audience in the new Democratic majority in the House, where likely Speaker Nancy Pelosi (D-Calif.) has signaled she’ll make climate change a central focus.

But it’s not just environmentalists and liberals who have concerns with USMCA. Oil- and gas-friendly lawmakers want to see the ISDS provisions extended to cover smaller energy companies that are helping the major firms produce oil and gas in Mexico.

Sen. Bill Cassidy (R-La.) is pressing for broadening the companies protected by ISDS in the deal through a "side agreement" with Mexico.

"Currently if you are Exxon and you are contracting with the Mexican government, you have ISDS, but Exxon can take care of themselves," he told E&E News this week. "What if you are the oil field service company that is working for Exxon, and you have to have a joint venture under Mexican law, and then Mexican law decides to kind of grab your goods from you? That’s not fair, and those guys don’t have the same recourse."

Additionally, the U.S. Chamber of Commerce this month led a host of business groups in urging the Trump administration to remove the contentious Section 232 steel and aluminum tariffs from the deal. Continuing the tariffs will further complicate the deal’s prospects for congressional approval, the groups wrote this month.

"Tariffs are taxes, both those imposed by the administration and those our trading partners apply," the groups wrote. "In the end, they will only hurt our long-term economic growth and competitiveness, reduce our overall output of goods and services, negate the benefits of tax reform and raise costs for American businesses and families throughout all 50 states."