Cost of ACE could eclipse benefits by $980M 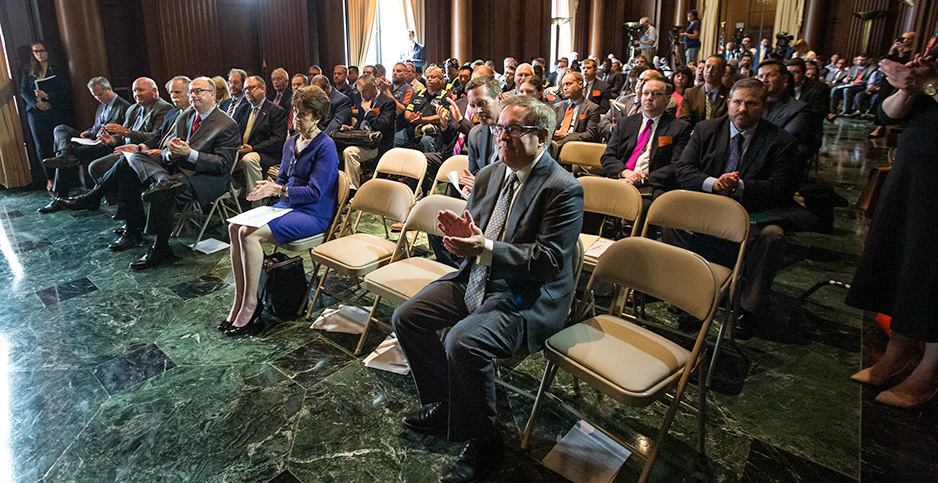 EPA Administrator Andrew Wheeler sold his agency’s power plant carbon rule yesterday as having all the benefits of its Obama-era predecessor with none of the costs.

He told an invited audience of conservative lobbyists and GOP lawmakers at EPA headquarters that the Affordable Clean Energy rule would slash emissions of carbon dioxide and pollutants that harm human health directly, while saving the public up to $730 million annually.

"Here is the bottom line: ACE will continue our nation’s environmental progress, and it will do so legally and with proper respect for the states," he said.

But the 238-page rule and its 248-page regulatory impact analysis show the plan effectively maintains the status quo, doing little itself to lower emissions.

And when benefits from the ACE rule’s modest cuts in ozone and particulate matter aren’t counted in its favor — something the Trump administration has advocated in other rules — the costs of the plan exceed its benefits by as much as $980 million over 15 years.

"I think what it really shows is how little this rule actually does," said Paul Billings, vice president of public policy for the American Lung Association. "This rule shows very, very small benefits because it’s providing very few reductions."

The ACE rule, which was written to replace the Clean Power Plan, aims for modest heat rate improvements to be achieved at coal-fired power plants through a narrow menu of efficiency measures.

Those measures aren’t costly, but neither do they cut much carbon. Wheeler repeated yesterday that when the ACE rule is fully implemented, U.S. power plant emissions will be 35% lower than they were in 2005. EPA’s regulatory analysis backs him up — but it shows the same 35% reduction in 2030 with or without the ACE rule.

The rule’s contribution: a 0.7% reduction.

That hasn’t changed since August’s proposal. What has is EPA’s framing of ACE’s costs and benefits. The agency has rejiggered assumptions and recalibrated figures in a way that observers say seems calculated to hide the delta between what the now-defunct Obama rule did and what ACE does — or doesn’t — do.

"The major changes I’m seeing between proposal and final here are not changes to the ACE rule," Billings said. "The changes are in the baseline."

Those changes have been dramatic and have produced some notable consequences.

For example, the central baseline used in the proposal was the Clean Power Plan; ACE’s costs and benefits were measured against it. That led to unflattering headlines in The New York Times and elsewhere that ACE would cause as many as 1,400 additional premature deaths each year by 2030. The figure reflected the fact that more coal-fired power plants would stay online under the Trump rule, emitting more fine particulate matter linked to respiratory and cardiovascular disease.

Yesterday’s final rule solves that problem by setting the baseline at business as usual. But while that gets rid of the body count, it also loses the Clean Power Plan’s larger price tag. The Trump rule is now seen to carry as much as $1.6 billion a year in seemingly new compliance costs.

The $730 million in net benefits Wheeler referred to yesterday are the high end of what could come when the rule’s ancillary cuts to ozone and fine particles are counted. But when the regulatory impact analysis looks only at the rule’s carbon-reduction benefits, the ACE rule’s $730 million annual net upside becomes a $980 million net deficit overall.

The rule’s already-slim CO2 benefits are further diminished by the Trump administration’s choice to consider only domestic greenhouse gas emissions and not the global benefits of avoiding climate change.

The rule’s analysis did not depart from the established EPA practice of estimating health effects for smog and soot below the level set by EPA standards (Climatewire, June 19).

"To me, it just looks like they’re rigging the cost-benefit analysis to serve their political ends no matter how inconsistent it looks," he said.

More broadly, the Trump administration is eyeing changes to how it counts these ancillary benefits in rulemakings. Last December, for example, EPA faulted the Obama administration for relying on the health benefits of reducing fine particle pollution for justifying the costs of its mercury standards for power plants (Greenwire, Dec. 28, 2018).

EPA is also considering a separate rulemaking on how it conducts cost-benefit analysis. Four program offices at the agency will draft their own rules to create a consistent standard.

Industry groups are pushing for EPA to use these regulatory changes to reevaluate how it counts co-benefits. They’ve long argued that the agency is overestimating them to justify further regulation. But public health groups have warned against discounting co-benefits in rulemaking (Climatewire, May 31).

Janet McCabe, former EPA air chief under President Obama, wondered whether the agency may now be intentionally playing up the cost of its own carbon rule.

Some observers also warn that the ACE’s efficiency improvements could encourage more power plant operators to use coal-fired plants more frequently and over a longer life span than they would have even under a business-as-usual scenario.

A senior EPA official on a call with reporters yesterday morning denied that ACE could lead to higher overall emissions.

"We project, at full implementation, emissions from the sector are going to decrease, and it is entirely possible for some individual facilities, emissions may go up, but even if they go up based on greater utilization, the utilization rate will go down. That’s what this regulation would require," the official said.

Joseph Goffman, a former senior official at EPA under the Obama administration, called it "mind-boggling" that Trump administration officials like Wheeler tout emissions reductions in the power sector despite having criticized policies to achieve them.

"It is as if the speaker himself suffers from moment-to-moment amnesia, or thinks the audience does," Goffman said.

Correction: An earlier version of this story inaccurately stated that the $980 million cost was an annual figure. It’s the cost of the rule over the full implementation period.