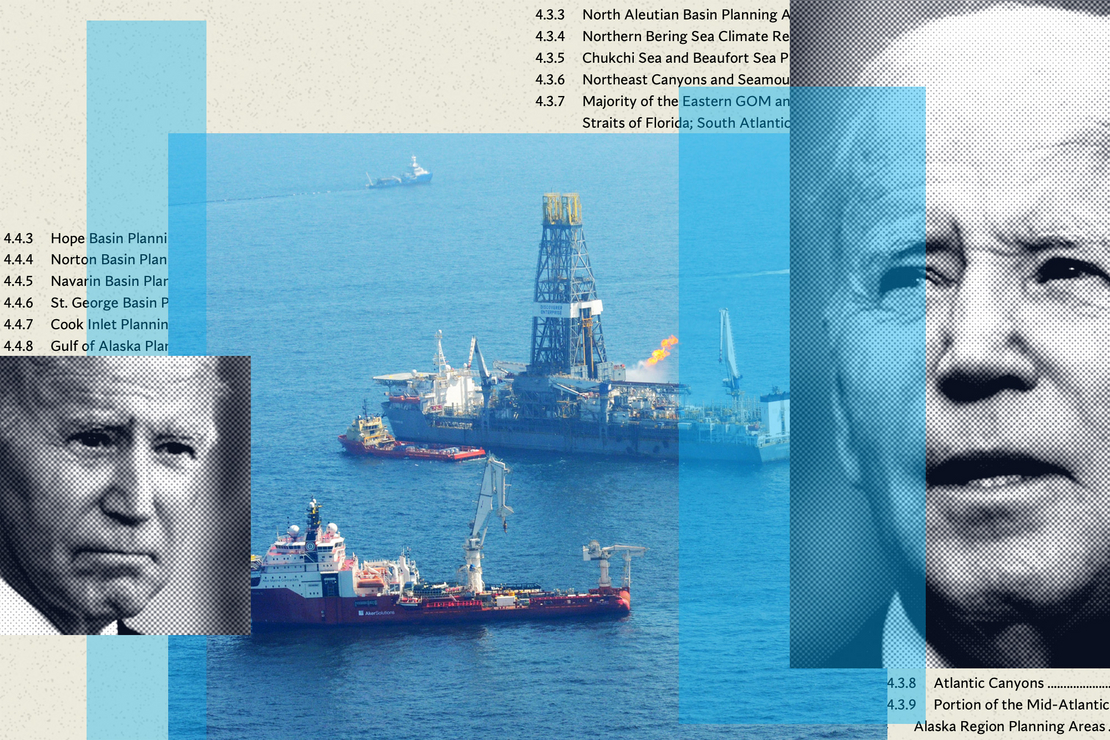 The Biden administration is finalizing an energy plan that could shift the future of the nation’s offshore oil development. POLITICO illustration/Photos by Getty Images, Bureau of Ocean Energy Management (text)

The Interior Department’s plan for selling new leases to drill off U.S. coasts is due any day, a legacy-defining policy for President Joe Biden that could help hasten the decline of the nation’s offshore oil business.

What’s in the five-year offshore oil plan, a program required under federal law, likely comes down to a fossil fuel lifeline tucked into last year’s sweeping climate and clean energy law as a concession to pro-oil Democratic Sen. Joe Manchin of West Virginia.

Overall, the road map could have long-lasting impacts on the Gulf of Mexico, the country’s largest offshore supplier of crude oil.

The plan — which has been years in the making — highlights what’s been a difficult balancing act for the Biden administration, the first to fully tangle with the challenges of managing the nation’s vast resources of offshore oil and gas while also trying to address a worsening climate crisis. It is significant in that debate, as the plan determines how often the government sells new rights to drill in federal waters to oil and gas companies.

Once a routine matter to encourage the nation’s energy security, the program is under fierce scrutiny from climate activists calling on Biden to shift the nation away from its heavy reliance on fossil fuels. It’s also on the radar of congressional Republicans, who noted as gas prices spiked last summer that the previous plan expired during the Biden administration without another in place. Biden officials have blamed the Trump administration for suspending work on the offshore program, which takes year to write.

Biden, who campaigned on a promise to end leasing on federal lands and water, has throttled new sales both offshore and on land, but the administration’s freedom to further constrain offshore oil and gas auctions was undercut by Manchin’s provision in the Inflation Reduction Act.

The calculus likely being made now in the White House is how much oil does the government have to lease to safely hit climate and clean energy goals, said Kevin Book, managing director of ClearView Energy Partners LLC.

Book forecast that the administration would chart a cautious path that offers at least a few oil sales in the program. Others predicted Biden will try to keep his campaign promise to end federal oil leasing by zeroing out sales.

“That was a lot of horse-trading going on to get a couple of swing votes turned over. The administration can do what they want to do on this,” he said.

A draft of the five-year oil plan, released by the Bureau of Ocean Energy Management in July prior to passage of the Inflation Reduction Act last year, left the administration’s options open (Greenwire, July 1, 2022).

According to that document, floated amid high stakes negotiations over the clean energy law, a final plan could include up to 11 sales, or none at all.

Biden himself has sent mixed signals about oil and gas drilling.

As pump prices soared following Russia’s invasion of Ukraine last year, the president urged oil companies to use their federal leases to drill and push prices back down. But, this fall, some greens were encouraged when Biden said “no more drilling” during a New York midterm election rally.

“We’re trying to work on that, get that done,” he said to questions shouted by a person in the crowd seeming to reference the five-year plan.

Oceana’s program director, Diane Hoskins, said the “inevitable conclusion” of this five-year program will be an end to new leasing in the country’s oceans.

“Opposition to new offshore drilling is broad and bipartisan, and we are counting on President Biden to keep his promise and finalize a plan with no new oil and gas lease sales,” she said in an email.

The Inflation Reduction Act’s provision linking offshore oil leasing to wind gets a little complicated, and its effectiveness at securing additional oil auctions could actually be undermined by a separate pro-oil order in the law. In addition to trying to boost future oil leasing, the new law specifically mandates three offshore oil sales Interior canceled in early 2022.

One in the Cook Inlet of Alaska was held in December, but industry barely expressed interest, as only one company bid to secure just one lease (Energywire, Jan. 3).

Two other lease sales must be held in the Gulf of Mexico, one by March and a second by September.

Book, with ClearView, said those auctions alone will give the administration cover to continue leasing offshore wind almost to the very end of Biden’s first term.

The question, then, is how much the Biden administration wants to allow for wind leasing beyond that.

Enough ocean is now currently leased to support Biden’s 2030 target of 30 gigawatts of offshore wind — enough to power 10 million homes — but not his moonshot of 110 GW by midcentury.

Given these larger ambitions, Book sees the administration playing it safe, by scheduling at least some offshore leases down the line. This could be a effective strategy because Interior can easily cancel them, he said.

Adding new oil sales that are not included in a five-year program is difficult under federal law, while cancellation is at the discretion of the Interior secretary.

“If they put out a plan that gives them options, they can take those options if they need them,” Book said.

Another factor being weighed by observers is how the five-year program will interact with larger dynamics in the offshore oil industry.

Too few sales would speed up companies moving away from the region or at least reducing investments in new projects, but even annual auctions can’t stop the Gulf’s current trajectory toward becoming an aged basin, experts said.

Dismukes, with LSU, said fewer sales — or none at all — could significantly undermine the industry at this juncture.

“It starts to consistently send a signal that the Gulf of Mexico is going to be a place where, yeah, you can do some business. But it’s not something you can count on,” he said.

At the moment, the Gulf remains a powerhouse of production, supplying some 15 percent of the nation’s oil, with production sites that can produce for decades.

That dominance has led many large operators in the Gulf to hold onto optimism despite the pressure on leasing, thinking they can ride out the Biden administration, Dismukes said. Industry’s confidence comes from the steady demand for their energy and the Gulf’s advantage as a low-carbon-intensity producer, meaning there’s less carbon dioxide associated with offshore drilling compared to many onshore oil plays, he said.

“I think most of them recognize there’s not going to be any aggressive oil and gas development,” he said. “I think they’re just trying to maintain the status quo.”

But the status quo in the Gulf is gradually shifting in ways that federal policy can’t prevent, said Hunter Kornfeind, an oil market analyst at Rapidan Energy Group.

Some of the major companies are increasingly looking at shorter cycle assets, places onshore that can be drilled and produced faster than the multibillion-dollar investments in the Gulf that take a decade to bring online and produce.

This may be visible in Exxon Mobil Corp.’s plan for 20 percent growth in the Permian Basin in West Texas in 2022, coming off a 25 percent growth rate the previous year. Chevron too has invested in significant Permian growth.

While offshore basins in other parts of the world have seen growth compared to the U.S., companies in the Gulf have been focused more on increasing production from existing sites than heavy exploration or expansion, Kornfeind said.

“The Biden administration could put as many acres for lease as they want and open up all kinds of regulatory options for producers in the Gulf of Mexico,” he said. “But, you know, at the end of the day, it’s up to your Exxons, your Chevrons, to put money towards these leases. And generally, we haven’t seen that in the past couple of years.”

ClearView’s Book said the new five year plan won’t necessarily be a dramatic shift for the federal offshore oil program, which remains a mandate under federal law, but it could represent something new —more focus on other Gulf opportunities like carbon storage under the sea floor.