Could a rogue nation alter clouds to combat warming? 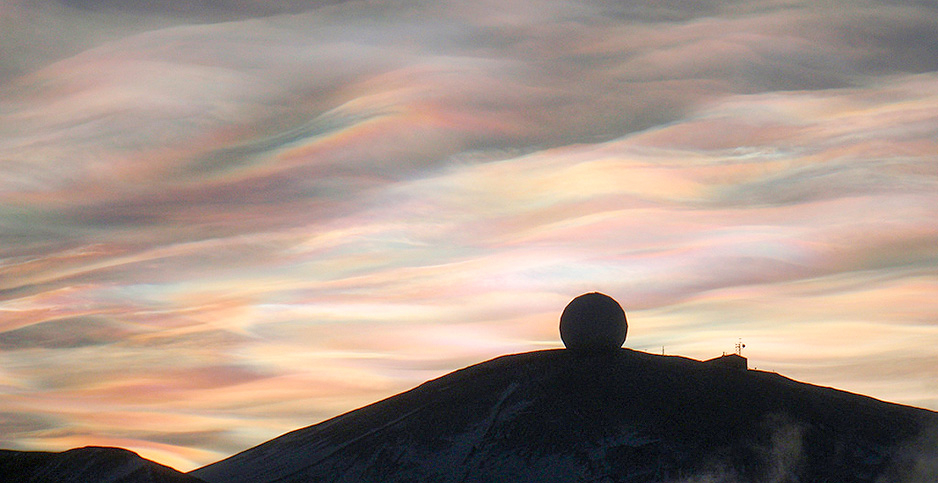 Plans for two experiments to potentially slow global warming by deploying tiny particles into the atmosphere have sparked an international debate over whether such tests should be allowed without some form of government scrutiny.

The experiments are being planned by scientists who worry that the U.S. government, and others, is not equipped to move fast enough to mitigate greenhouse gases before the world reaches dangerous "tipping points." Those stages of planetary change could accelerate the heating effect, perhaps to life-threatening levels, they say.

Those involved in the debates are split about the experiments, being planned at the University of Washington and Harvard University. Dr. V. "Ram" Ramanathan, a professor of atmospheric and climate sciences at the Scripps Institute of Oceanography at the University of California, San Diego, is an author of a study released this fall at the United Nations in an attempt to enlarge the discussion of potential climate disasters (Climatewire, Sept. 15).

Ramanathan worries about "messing with clouds." The test being planned in Washington state involves seeding clouds with aerosols from salt water to "brighten" them. That might reflect more heat from sunlight back into space.

"My problem with messing with clouds," Ramanathan said, is that they could disrupt atmospheric circulation patterns that "would cut the rainfall," particularly in the tropics. "It’s the one thing that all [climate] models agree about."

He sees little harm in the proposed Harvard experiment, which would use a large helium-filled balloon carrying an instrument-filled gondola to briefly track a plume of man-made aerosols in the stratosphere (Climatewire, June 14). János Pásztor, a former top climate change adviser to the U.N. secretary-general, sees no harm in the experiment, but he is campaigning for a "hold" on any future deployment of the Harvard research that would attempt to cool the Earth.

"The ethical challenges raised by solar engineering are profound," said Pásztor, a former Hungarian diplomat who now heads the Carnegie Climate Geoengineering Governance Initiative. The group wants no large-scale experiments on what he calls "solar geoengineering" until the risks and benefits are better known.

At the moment, Pásztor notes, there is no national or international regime to monitor such experiments, which could cause uneven regional impacts on weather and climate around the world. "We feel there is the potential danger of a single country or small group of countries, or even a wealthy individual, to actually deploy solar engineering without governance," he said.

One of the most difficult and contentious political questions his group is pressing for answers to is: Who controls the global thermostat? "We need to get going very quickly," Pásztor said, "because these technologies are emerging sooner than we think."

Experiments that modify the Earth’s atmosphere are not new. They’ve been going on since the industrial age began, usually as the byproducts of other intentions, such as improving transportation, or a range of other efforts that left telltale chemical scars.

Among them are nacreous clouds hanging in the stratosphere, mixtures of supercooled water, ice crystals and nitric acid. They are the result of the breakdown of various chemical compounds, such as chlorine nitrate and hydrochloric acid, from industrial pollution. They have their own eerie and disquieting beauty. Some people call them "mother of pearl clouds," but they also have a dark side that can react with sunlight to emit chlorine, which can harm the Earth’s protective ozone layer.

The advent of space satellites in the 1960s revealed that ships crossing the oceans spew pollution that contains particles of soot and other materials that water vapor attach to. That creates long, tubular, man-made clouds that often hang over the oceans. On heavily trafficked routes, the resulting tangle of "ship track clouds" sometimes resembles plates of spaghetti.

Until now, it has been Mother Nature who controls the Earth’s thermostat. She has also conducted the most adventurous cooling experiments. One of them was the eruption of Mount Pinatubo, the Philippine volcano that exploded in June 1991, throwing over 10 million tons of sulfur dioxide into the stratosphere, where it circled the Earth and dimmed the sun. It is estimated to have dropped global average temperatures by almost a degree Fahrenheit (0.5 degree Celsius) between 1991 and 1993.

That achievement is part of the inspiration for what an interdisciplinary group of researchers at Harvard calls a "Stratospheric Controlled Perturbation Experiment," a balloon-based experiment to see whether scientists can create small clouds weighing no more than 2.2 pounds and comprising various aerosols in the stratosphere. The goal is to measure the effects and gauge the chemical changes that may take place. Project sponsors say they’ve raised the money to carry out the first experiment in Arizona next year.

"I wouldn’t dramatize this as a big geoengineering experiment," explained one of them, Daniel Schrag, director of Harvard’s Center for the Environment. "It’s really about trying to understand how particles behave in the stratosphere.

"Yeah," he acknowledged, "there is a potential application to geoengineering, but this is just a small process developmental field experiment." Because other countries may attempt broader geoengineering experiments if the United States doesn’t, Schrag said, "I’d like to see accelerated research programs so people understand this and use half the money or maybe more on trying to figure out anything that could possibly go wrong.

"Doing nothing is not the right thing to do here," he added. "It may be that geoengineering is a terrible idea, except for just letting climate change occur, which would be even worse."

At the University of Washington, researchers are more inspired by ship tracks. They want to create their own, using a specially designed sprayer, carried aboard a seagoing vessel. "The Marine Cloud Brightening Project" could spew trillions of tiny droplets of seawater from a specially designed sprayer with hundreds of nozzles. Then scientists could examine what the impacts are on selected cloud formations lying low over the oceans.

The hope is that the process could "brighten" existing clouds, making them reflect more sunlight back into space and thus cooling the Earth in various regions. Some scientists elsewhere have speculated that brightening clouds over warming oceans might cool them enough to stop hurricanes. Others have gone one step further, developing methods to help stop hurricanes by using floating islands of generators making electricity from wave power. They would feed pumps to sap the strength of superstorms by pumping up cooler water from the depths of storm-prone regions.

But the current realities of the laboratory are less adventurous. "We are still in the realm of whether this will even work," noted Robert Wood, a professor of atmospheric sciences at the University of Washington.

"We think the [climate] models may be overestimating the strength of aerosols on clouds, but we can’t replicate some of the key processes that we think are important. We just don’t have the ability to do many controlled experiments in the atmosphere. To me as a physicist, the idea of doing a controlled experiment is very powerful," Wood added.

Compared with some 30,000 to 50,000 ships that are creating man-made clouds over the oceans every day, the University of Washington’s experiment would seem tiny. Plus, it would be controlling the aerosols it would be spraying. "We could turn it off and move it where we want," Wood said.

The university has approached federal agencies to help finance the project. "It’s in discussion at this point. Nothing is official, but there is a sense that we should be doing something about this," said Wood. He is somewhat leery that the Carnegie proposal for international governance could delay the experiment before they discover whether the sprayer even works.

"You could regulate something so it never happens, right?" he asked.

"Some people suggest that we wait so we can make foolproof tests that don’t backfire on us," Gardiner said. "There isn’t going to be any magical way of doing this that benefits absolutely everybody across the planet." On the other hand, he said, "no country wants to be on the nasty end of this."

Gardiner fears what he calls a huge intergenerational problem. There is an older generation that might be lulled into thinking it should wait for a perfect climate solution. Gardiner believes it resembles the British in their hopes for appeasement in the years before Nazi Germany ignited World War II.

Then there is the younger generation, including the students whom he pushes to mull over the ethics of geoengineering in his philosophy classes. He gives them the "Captain Kirk test," after James T. Kirk, the fictional spaceship commander on "Star Trek." The series has kept international audiences in thrall over science fiction drama for more than 50 years.

"I always ask my classes, what would they do if Captain Kirk shows up with technologies from hundreds of years in the future that have been successfully tested and you knew exactly how to fine-tune them, and the alternative was climate change?" Gardiner said.

"I find most people would be willing to give Captain Kirk a hearing," he added. "But a big problem is that we’re nowhere near the world of Captain Kirk. And it is not at all clear that we can get there fast enough to make these big technological interventions relevant to the problem that we face."