Could Antarctica be refrozen? Don’t laugh 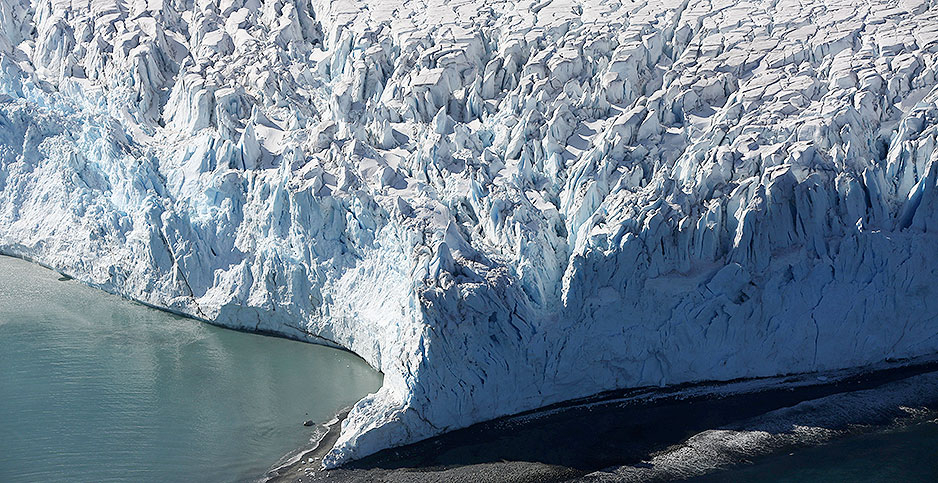 Some scientists are proposing a revolutionary idea to refreeze glaciers in Antarctica. Alexandre Meneghini/REUTERS/Newscom

In a hypothetical future, the once-pristine Antarctic landscape is cluttered with cutting-edge machinery. Thousands of towering wind turbines punctuate the skyline as enormous snow machines suck water out of the ocean and blow it onto the surface of the ice sheet. The drone of heavy equipment fills the air.

It’s a shocking vision. But some scientists say it could be one way to prevent Antarctica’s most vulnerable glaciers from collapsing into the sea if global warming isn’t halted in time.

Researchers from the Potsdam Institute for Climate Impact Research presented the concept in a new paper this week, published in the journal Science Advances. They focused on the massive Pine Island and Thwaites glaciers in West Antarctica, both famous for their rapid rates of ice loss.

Scientists are increasingly concerned about the stability of the glaciers in West Antarctica, and a number of studies have begun to investigate the possibility that the region could one day collapse entirely. It’s an outcome that likely wouldn’t come to pass for centuries or even millennia — but if it did, the consequences for future human societies could be devastating. The region contains enough ice to raise global sea levels by at least 10 feet.

The paper explores one way to potentially stabilize the ice sheet. Adding snow or ice to the Pine Island and Thwaites glaciers, potentially by sucking water out of the sea and refreezing it on the ice sheet, could stop the ice from retreating. That might prevent it from slipping into the sea.

It’s just a proof of concept so far — a preliminary study designed to demonstrate that an idea could, with the right resources, be possible. Still, the study warns that pulling it off would require a colossal effort.

Stabilizing the region would call for adding more than 7 trillion tons of snow to the ice sheet over a 10-year period. Just pulling the water out of the ocean would likely require a minimum of 145 gigawatts of power, the researchers estimate, which would call for around 12,000 state-of-the-art wind turbines. And that’s without factoring in the power that would be needed to turn the water into snow.

The impact on the natural ecosystem would likely be devastating, the researchers note.

So why consider the idea at all?

"People haven’t really realized that even if we keep the Paris climate agreement, we have a sea-level commitment of 5 meters," said Anders Levermann, a climate scientist with the Potsdam Institute for Climate Impact Research and co-author of the new study.

He’s referring to a 2013 study, which he led, that suggested the planet is committed to 2.3 meters of sea-level rise for every degree of warming. Additionally, Levermann is among a camp of researchers who believe that West Antarctica has been destabilized to the point that its eventual collapse may be inevitable, even if it happens centuries down the road.

"We’ll have to deal with this eventually," he said.

The paper was meant to be a first step in demonstrating that the snow-blowing strategy could work — maybe. No further research is planned "because now society has to decide whether they want to do it or not," according to Levermann. "If society says we have to do this, then a lot of research has to be done."

In the meantime, Levermann and his colleagues aren’t the only researchers thinking about the future of the world’s frozen places. Other groups have also begun to explore ideas related to polar geoengineering. These strategies are designed to physically manipulate the planet in ways that might restore some of its ice, or at least prevent more losses.

Their reasons tend to be similar: Global greenhouse gas emissions aren’t falling, and unless they begin dropping soon, contingency plans might be needed in the future to prevent the worst effects of climate change.

"We need to cut back our CO2 emissions, and it’s possible to do that — but it isn’t happening right now," said Steven Desch, a physicist at Arizona State University.

Desch himself has proposed a concept he calls Arctic ice management, a potential strategy for refreezing Arctic sea ice. Like the new idea to stabilize Antarctic glaciers, it would use special pumps to draw water out of the ocean.

Many experts believe that declines in sea ice are causing the Arctic to absorb more heat and to warm at faster rates than the rest of the world. By restoring the sea ice, Desch suggests that this runaway effect could be dampened.

"A lot of the responses we’re going to take to [address] climate change are going to be not a pure solution," Desch said. "There are going to have to be a number of regional stopgap actions. So there are a myriad of different problems, and each one is going to need to be studied carefully."

Other research groups have also focused on Antarctic glaciers. In a 2018 paper, researchers Michael Wolovick of Princeton University and John Moore of Beijing Normal University proposed a method to prevent ocean water from contributing to the destabilization of West Antarctica.

Research increasingly suggests that warm water may be melting glaciers from the bottom up. The study proposes the construction of gigantic "sills," or underwater mounds on the seafloor, which would block ocean water from seeping beneath the ice shelves.

Scientists are already thinking about the pros and cons of pursuing various engineering options, even though they’re just concepts. Levermann, for instance, suggests that the use of underwater sills may not go far enough to actually stabilize the West Antarctic Ice Sheet, even if it prevented additional melting. Moore suggests that the snow-blowing concept may use an "untenable" amount of resources.

But they agree that thinking about these concepts is already warranted.

"I welcome more people thinking about targeted geoengineering — especially for the West Antarctic because once that starts to collapse we can’t stop it just by turning down the temperature," Moore said in an email.

The consequences of climate change that are already inevitable, and which ones might still be prevented, is the subject of some discussion. For instance, there’s still some debate about the risks to the West Antarctic Ice Sheet under very low-warming scenarios, although some scientists, like Levermann, do believe that collapse is unstoppable.

But there’s no debate on this: The impacts of climate change will grow worse if more warming is allowed to occur. And the fact that current efforts to address the climate crisis aren’t keeping pace with the terms of the Paris Agreement is a reason to start examining unconventional options now, Desch suggests.

"I think my point is whether or not we think this time, or five years, or 10 years from now is the time to apply these geoengineering studies — the fact is you can’t just flick a switch at that date and start one," he said. "You need to start thinking about them right now and prioritize them or rank them for their effectiveness or negative consequences.

"Studying them is the first step."