Could Biden use private land to reach 30×30 goals? 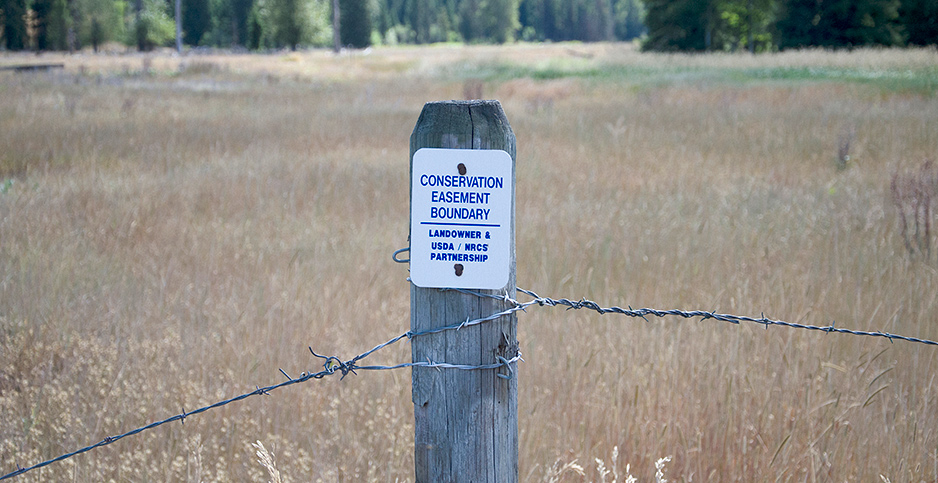 A conservation easement in Swan Valley, Mont. Department of Agriculture/Flickr

With more than 650 million acres in the federal estate, targeting existing public lands for natural preservation would seem to be an obvious idea as the Biden administration looks to fulfill its ambitious conservation goals.

But as congressional lawmakers and the White House try to figure out how to get to "30×30" — protecting 30% of the nation’s land and waters by 2030 — some observers are emphasizing a different untapped resource: privately owned lands.

But the idea isn’t simply to buy up private property or establish traditional easements. Instead, groups like the Western Landowners Alliance, which represents 15 million acres across the western United States and Canada, see an opportunity to rethink what conservation means.

"Conservation as usual isn’t working, and this is an opportunity to actually do something different and change that trajectory, but it’s going to involve economics and people who live and work on the land," Lesli Allison, the group’s executive director, told E&E News.

Instead, Allison explained, options like "habitat leasing" or other short-term agreements — a period counted in decades — could provide ranchers and farmers financial support to maintain their livelihoods while also helping to address biodiversity, one of the primary goals of the 30×30 movement.

"If our minds are fixed on the idea that the only thing that counts is permanent legal protection, then the only options that people can think about for private lands are either permanent conservation easements or acquisitions," Allison said.

She later added: "There’s an assumption if you just don’t touch land, if you leave it alone, it will thrive and prosper. That is perhaps a flawed way of thinking about what conservation is."

According to the U.S. Geological Survey, currently only 12% of the nation’s lands are in a natural state, along with 32% of the country’s oceans. The agency’s Protected Areas Database shows that as of 2016, the most recent data available, about 200 million acres of land was under permanent protection.

"If you strictly go with permanent legal protection, you might get a certain number of acres on paper, but will you get to the real goal of ecological function and biodiversity? I don’t think so," Allison said.

The Agriculture Department’s Farm Service Agency oversees the largest private-land conservation program, the Conservation Reserve Program. Established in 1985, the program aims to conserve topsoil from erosion through the planting of approved grasses and trees.

Landowners sign contracts of 10 to 15 years and receive rental payments. USDA states more than 20 million acres of private land is enrolled in the program.

Another USDA program, the Agriculture Conservation Easement Program, reports it has protected 4.4 million acres of farmland and wetlands over 25 years.

Involving farmers and ranchers in those conversations can also alleviate fears about government "land grabs," whether via the purchase of new federal land or by curtailing activities on existing parcels.

"That is not the threat," Fosburgh said. "The threat is things being converted to condos. In order to avoid that backlash that we’re apt to see in rural America, the Biden administration and proponents for 30×30 have to be proactive in those concerns."

Some local and state programs are already aiming to encourage more participation by private landowners in short-term habitat conservation efforts.

Central Colorado Conservancy Executive Director Adam Beh described habitat leasing as an opportunity for landowners to "dip a toe into the water" rather than requiring a permanent commitment.

"For some folks, that’s not always so palatable," said Beh, whose group has secured more than 5,000 acres of land for permanent easements since its creation in 2001. "Whether they’re thinking of their legacy to their children or not wanting to tie everything up forever, this leasing approach says, ‘Let’s buy a little bit of time.’"

He added: "It’s really about building that relationship with individuals over time and getting to talk to them about a conservation message that resonates."

The nonprofit’s year-old Community Conservation Connection program counts 10 landowners among its participants. They have agreed to set aside 4,000 acres in the five-year conservation program.

Landowners, who must have at least 160 acres to qualify, agree to limit non-agricultural development and continue "basic management practices," including irrigation.

The program is funded by a sales tax approved in 2018 by voters in Chaffee County, Colo., to address forest health, wildfires and conservation activity. The Common Ground Fund has distributed $150,000 to the habitat-leasing program to date.

"There are so many different strategies that can be employed in order to meet this 30% goal," Beh said. "It can’t be met just by our federal and state agencies themselves. The nonprofit community, we have strong local relationships with folks who manage land here."

While Beh notes that habitat leasing programs are not a new invention, he said local direction of such efforts can often capture otherwise overlooked acreage — particularly in areas like the Rocky Mountain West where population growth often puts productive agricultural land at risk for development.

"We’ve got to pay attention to the priorities of private landowners and see them as major players," Beh said.

Notably, the leases are not targeted toward increasing access to land for the general public. More often than not, operations, including grazing, may continue on the property under the conditions of the agreement.

"This isn’t the silver bullet," Beh said. "This is one strategy that can be used to conserve land and resources and a certain quality of life that in these rural communities we’ve come to enjoy. We have to meet people where they’re at."