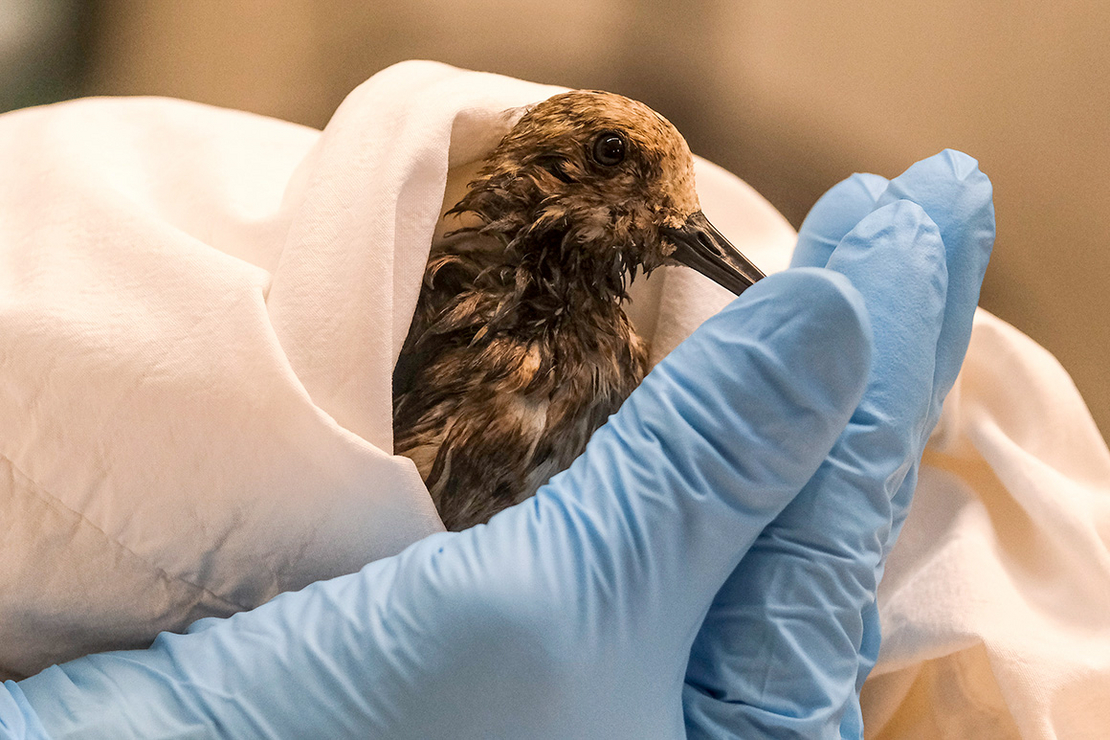 The wildlife trauma from California’s latest oil spill could be worse than it looks.

While officials now estimate more than 120,000 gallons of oil has spread along the Orange County coast since Sunday, the tally of bird deaths and other wildlife losses remains in its early stages. As of last night, the Oiled Wildlife Care Network reported having found 13 live oiled birds and two dead birds.

“I think it’s a drop in the bucket of what we’re going to get,” Andrea Jones, director of bird conservation for Audubon California, told E&E News, adding that “there are going to be impacts that are going to be hard to quantify.”

Jones explained that birds may clean the oil off, or try to, but then grow ill over time.

“They may fly somewhere and die somewhere else, or they may get picked off by a predator because they can’t fly as easily because they’ve got oil on their wings or feathers,” Jones noted. “It may take a while, and by then, everyone thinks we’ve cleaned up the beach, we’ve scooped the dead birds out of the ocean.”

The first casualty reported by the Coast Guard was “one oiled Ruddy duck,” which was provided veterinary care. The Oiled Wildlife Care Network was activated.

The multi-organization network, in partnership with the California Department of Fish and Wildlife’s Office of Spill Prevention and Response, was founded in 1994 following the Exxon Valdez oil spill in Prince William Sound and a spill off Huntington Beach, Calif.

By last night, the network was reporting that the dead birds from the latest spill included an American coot and a western gull. The living oiled birds included seven western grebes.

In addition, the California Department of Fish and Wildlife reported finding a brown pelican that had sustained wing injuries.

“Unfortunately, we had to humanely euthanize it at the site,” CDFW Lt. Christian Corbo told reporters at a briefing Monday.

Jones noted that “pelicans are really susceptible because they’re flying over the ocean, and when they see a fish, they might dive right through the oil, and then they get stuck and can’t lift off again.”

The crude oil escaped from a broken pipeline about 5 miles from shore, and was conveyed south to settle primarily along Huntington Beach (Greenwire, Oct. 5).

Martyn Willsher, CEO of pipeline operator Amplify Energy Corp., said damage from a ship anchor is “one of the distinct possibilities” as a cause of the rupture.

The Coast Guard reported that as of early yesterday, an estimated 15.67 miles of light oiling had been reported along shorelines, 6 miles of shoreline had been cleaned, and 11,360 feet of containment boom had been deployed.

The California Department of Fish and Wildlife closed fisheries in coastal areas affected by the spill.

Jason Rylander, senior counsel with Defenders of Wildlife, told E&E News that it’s “an open question” whether the Migratory Bird Treaty Act might be brought to bear but added that the episode “emphasizes how, as with past oil spills, the MBTA has an important role to play. Funds from penalties under the MBTA could be used to help restore wetlands and other impacted areas.”

Oil-covered bird feathers lose their ability to trap air and repel water. Birds lose body heat. They do not float well and may not be able to fly. Their preening causes them to ingest oil, which wreaks internal damage.

The long-term prospects for the oil-covered birds, even if rehabilitated, remain an open question in some circles.

But since then, a 2018 report in the Journal of Fish and Wildlife Management found greater success and concluded that “differences in relative survival of rehabilitated oiled wildlife appear to be strongly dependent on species differences, aspects of the spill (product type, speed of response), or details of rehabilitation methods.”

Dolphins frequent the area, and eat fish. And next year, the least terns now safely on their way to South America will come back to the California beaches that have been befouled.

“What worries me,” Jones with California Audubon said, “is that we’ll be seeing impacts from this oil for decades.”