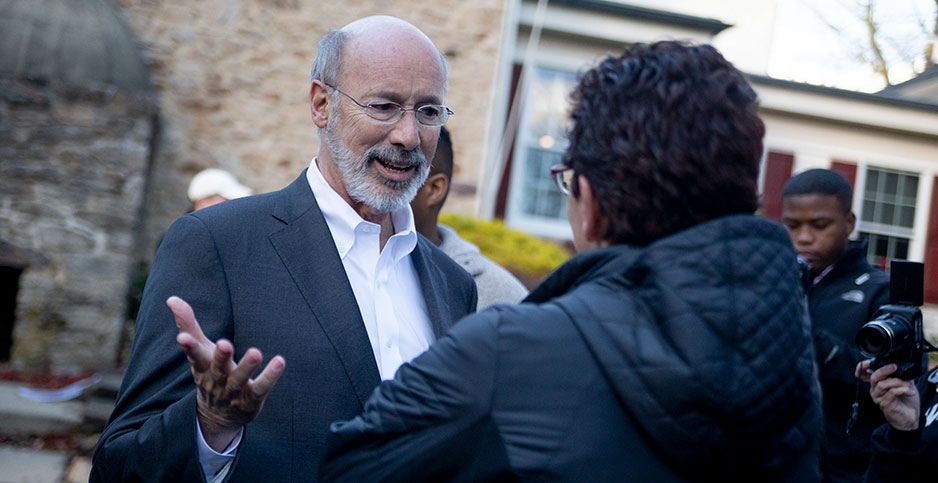 Pennsylvania’s direction in the 2020 presidential election could hinge on someone who’s not even on the ballot: Democratic Gov. Tom Wolf and his record on natural gas drilling.

Wolf was elected in 2014 after promising to tame the state’s drilling boom, which was spurred by the development of hydraulic fracturing. Now in his second term and unable to run again, Wolf has settled into a sort of truce with the gas industry, analysts say. He has proposed a gas tax every year since taking office, and his administration is pushing forward with regulations on methane emissions from the state’s thousands of existing gas wells.

But the tax has been blocked every year by the Republican-controlled Legislature, and the governor has pushed to allow pipelines that could open new markets for the state’s drillers.

John Hanger, a former adviser to Wolf on energy issues, referred to the governor’s situation in terms of Texas commentator Jim Hightower’s quip that "there’s nothing in the middle of the road but yellow stripes and dead armadillos."

"He’s managed to chart a course that is middle-of-the-road, and he gets hit by both extremes," Hanger said.

Pennsylvania was one of a handful of industrial states that propelled President Trump to victory in 2016, with Trump carrying the state by less than 1 percentage point of the vote. Trump has signaled that he’ll make energy a central point of his reelection campaign in the state.

He has made two visits to the state this year, including an October gas industry convention in Pittsburgh. He used the occasion to rail against environmental regulations and warned about Democratic candidates who want to ban fracking (Energywire, Oct. 24, 2019).

"If the other people ever get in," Trump said, "you’ll all be out of business very quickly."

Democrats could be vulnerable in Pennsylvania’s gas-producing regions because a lot of voters remember Hillary Clinton’s remarks about putting coal miners out of business in 2016. The statement was quoted out of context, as fact checkers at PolitiFact pointed out at the time, but it fed into the GOP narrative that Democrats were disdainful about energy workers.

Some of the candidates for the 2020 Democratic nomination are also promising to ban fracking or stop producing fossil fuel on federal land (Energywire, Jan. 2).

Wolf’s record may not impact the presidential race either way, but it could blunt potential attacks from Trump and others who try to paint Democrats as opposed to all forms of energy production, Nicholas Clark, a political science professor at Susquehanna University, said in an email.

Kevin Book, a managing director at ClearView Energy Partners in Washington, D.C., said, "President Trump might be able to campaign on someone killing fracking somewhere else, but people in Pennsylvania have lived through the leadership of a governor who did not actually kill the resource."

The timing of Pennsylvania’s primary — it’s more than a month after the Super Tuesday primaries — could also help Democrats, said Christopher Borick, a political science professor at Muhlenberg College.

If one of the candidates has clinched the Democratic nomination by then, he or she could tack toward a more moderate stance on energy issues, cite Wolf’s record and start courting votes among blue-collar energy workers.

"Looking to the way Tom Wolf has done that would not be a bad thing," Borick said.

Yet how Wolf’s policies will play out in the 2020 election is still a wild card, said Seth Moskowitz, a political consultant and blogger who has written for the website 270 to Win and the Sabato’s Crystal Ball newsletter at the University of Virginia.

The presidential election is likely to be extremely polarized and dominated by the national parties, Moskowitz said. At the same time, Democrats have shown they can win over voters in Pennsylvania — exit polls in 2018 showed that 14% of Wolf’s supporters had voted for Trump in 2016.

"In a close election, tipping a few thousand voters could tip the state," Moskowitz said.

What is clear is that many swing voters could come from the natural gas industry, which is going through a contraction, largely due to low prices. The number of drilling rigs in the state fell to 24 last week from 47 at this time last year, according to Baker Hughes Co.

Employment in the mining and logging sector, which includes the oil and gas industry, has held steady at about 29,000 for the last six months. But the number of jobs in construction and manufacturing has fallen off, according to the Bureau of Labor Statistics.

"Obviously, in elections, people who are out of work are volatile," said Hanger, the former Wolf aide.

Pennsylvania’s fracking boom was one of the few economic bright spots when Wolf took office.

His predecessor, Republican Gov. Tom Corbett, had pushed for a law, known as Act 13, that gave the gas industry broad freedom to drill in the state. At the same time, critics said budget cuts had decimated the state Department of Environmental Protection and kept it from properly overseeing the new industry.

Wolf promised to restore the environmental enforcement budget, and he promoted a tax on the gas industry as a way to restore revenue the state lost during the Great Recession.

Republicans in the Legislature blocked Wolf’s tax proposal, though, and the deadlock left the state without an approved budget for last six months of 2015 (Energywire, Jan. 4, 2016).

Five years later, a lot has changed. Wolf continued to press for a natural gas tax this year. But gas production has grown more than 40% since Wolf took office, and he has embraced the petrochemical plant that Royal Dutch Shell PLC is building outside Pittsburgh.

He won reelection with 57.8% of the vote in 2018. Rep. Conor Lamb, a Democrat who won a Pittsburgh-area congressional seat in 2018, also took a moderate stance on drilling and fracking.

Wolf’s more moderate stance on the gas industry probably helped him in areas like Beaver County, a suburb of Pittsburgh that’s one of the state’s top gas producers and is also home to the Shell plant, said Josh Kail, the area’s Republican state representative.

That has helped him win over voters who might be turned off by the Democratic presidential candidates or by congressional liberals like New York Rep. Alexandria Ocasio-Cortez, a champion of the Green New Deal.

"I think the governor appreciates the value it adds for the building trades" and other associated industries, Kail said. "He certainly isn’t a Bernie Sanders or an Elizabeth Warren or an AOC."

At the same time, environmentalists pushed back against Wolf’s proposal to streamline permitting for pipelines, and a half-dozen protesters were arrested at a public meeting to discuss the proposal in 2016. More recently, the FBI began an investigation into how the Wolf administration handled permits for the controversial Mariner East pipeline project, which runs from the western part of the state to the Philadelphia area (Energywire, Nov. 13, 2019).

Wolf’s spokesman didn’t respond to requests for comment. He remains popular with voters, according to a statewide poll by Franklin & Marshall College.

The telephone survey of 487 voters, which was conducted in October and has a sampling error of 6.1 percentage points, showed that 39% of respondents said Wolf was doing a good job and 13% said he was doing an excellent job. The same poll found 57% of voters felt Pennsylvania was headed in the right direction.

"He’s not vituperative," Madonna said. "It’s hard not to like him."