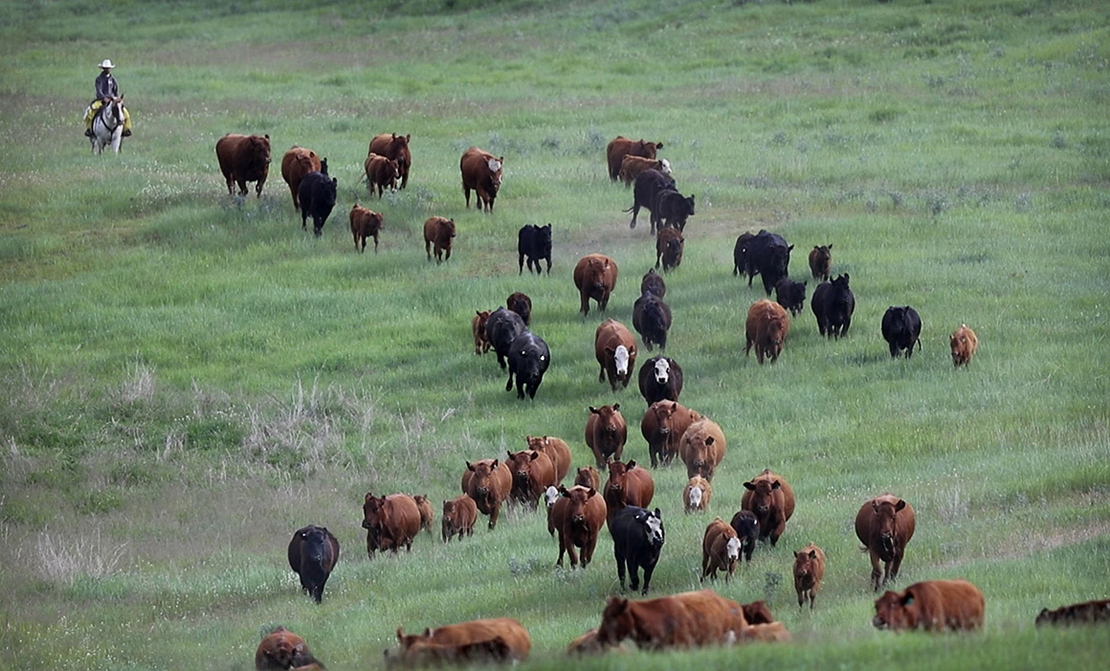 A rancher in 2017 moving cattle to pasture in the Colville National Forest in Washington. Steve Ringman/The Seattle Times/AP Photo

When top federal land managers suggested this month that millions of acres of public lands leased for grazing livestock could count toward the Biden administration’s aggressive conservation plan, environmentalists were quick to slam the idea.

After all, according to data compiled by vocal grazing critics like the Public Employees for Environmental Responsibility, more than a third of the 155 million acres leased to ranchers for cattle, horses, sheep and goats by the Bureau of Land Management fails to meet existing standards for water, vegetation and other health markers.

But some advocates see the discussion about grazing and conservation as potentially opening the door to a long-sought goal: grazing reform.

The conditions, Stade said, should exempt those lands from the administration’s "America the Beautiful" program, which aims to set aside 30 percent of the nation’s lands and waters by 2030 in order to protect biodiversity and address climate change.

At the same time, environmentalists acknowledge that the sheer amount of public lands used to feed livestock, which also includes another 95 million acres run by the Forest Service, could make it necessary to consider that acreage for conservation. If that happens, they say, they want to see the land either retired from use or active under new management practices.

"If we’re really serious about achieving 30 by 30 — the real goal of conserving 30 percent of the land to support biodiversity in the United States — we’re not going to get there unless we address BLM’s multiple-use lands," said Western Watersheds Project Public Policy Director Josh Osher, referring to the program by its commonly used nickname.

He added: "There’s just not enough acreage that’s really going to be available for conservation in a meaningful way. The same is true for the Forest Service."

Ranching advocates, though, have chafed at the suggestion that grazing isn’t currently compatible with conservation, saying their current practices and standards are sufficient, as well as worthy of inclusion in the Biden program.

"We absolutely believe they need to acknowledge and then include these acres that are conserved using grazing as part of their total," said Kaitlynn Glover, executive director of the Public Lands Council, whose organization represents ranchers who utilize grazing permit.

‘Commit to a major improvement’

In July, PEER Executive Director Tim Whitehouse pressed Interior Secretary Deb Haaland, whose agency is one of four leading the "America the Beautiful" program, along with the Commerce Department, Agriculture Department and White House Council on Environmental Quality, to "commit to a major improvement to rangeland health" as part of the conservation program.

"Landscapes that fail to meet the agency’s own minimum standards for ecological health as a result of overgrazing cannot be considered to be conserved, and should not be counted toward attainment of the new ’30 x 30′ conservation goals," Whitehouse wrote.

He pointed to data compiled by PEER, which tracks rangeland health standards on public allotments. Stade told E&E News an updated database, based on documents procured under the Freedom of Information Act, is due out in the near future.

BLM began tracking rangeland health in the 1990s, utilizing a series of measures that include the healthy streambank vegetation, water quality and ground cover, as well as biodiversity of both "desirable plant and animals populations," the agency says.

The Biden administration has yet to detail exactly how it will tally its progress on the conservation goal, which will be recorded in a database called the "American Conservation and Stewardship Atlas" (E&E News PM, Sept. 29).

According to the U.S. Geological Survey’s Protected Areas Database of the United States — which is expected to be utilized in the atlas — nearly 13 percent of the nation’s lands are permanently protected in a natural state, as are about 23 percent of its oceans.

Notably, those figures do not include multiple-use lands like working forests or grazing allotments (Greenwire, April 16).

While no details have been revealed about what standards the Biden administration will require for lands to qualify as "conserved," both BLM Deputy Director of Policy and Programs Nada Culver and Forest Service’s National Forest System Deputy Chief Chris French suggested last month that active grazing lands could be included (E&E News PM, Sept. 28).

Culver framed her explanation, however, by asserting that to qualify those lands could be subject to new grazing or management practices.

"We would welcome any serious considering of grazing reform from BLM and the Forest Service," said WildEarth Guardians public lands attorney Chris Krupp, adding that he is not
aware the administration is pursuing those goals.

"Right now it’s ridiculous to think that grazing lands across the West are worthy of inclusion toward 30 by 30," Krupp said. He argued that grazing results in damage to riparian habitat in the arid West: "The grazing program is actively harming biodiversity."

But Glover with the Public Lands Council rejects these criticisms from environmentalists, arguing that the same acreage would neatly fit the administration’s conservation pledge.

"On a very basic level, this is an opportunity for the administration to work with a very broad number of partners … to not only recognize but quantify the values that grazing has provided to these public lands and generally to the American public," Glover told E&E News.

"The proof is in the pudding about how we can turn a good idea into good practice on the ground," added Glover, who also serves as executive director of the National Cattlemen’s Beef Association Natural Resources.

"We’re really careful and care for the land in terms of how we graze," said Daley, a fifth-generation rancher. "We’re already meeting standards that, in many cases, exceed what I think people would recognize as conservation because it’s important to us to both protect the ecosystem and the land itself."

Earlier this year, Daley testified before the House Natural Resources Subcommittee on National Parks, Forests and Public Lands, and spoke about his own experience losing nearly 400 cattle to the Bear Fire in 2020.

"We have standards in terms of how much we utilize the meadow and what we do in terms of shrub utilization, what we do if there’s any hoof impact," Daley said E&E News. "I think most ranchers across the West recognize that that’s important not only to protect the ecosystem, but it’s for the management of their livestock."

Among the changes that ranchers would like to see are an extension of permit periods, from the current 10-year period to 20 years.

"Ten years is not a long time if you’re thinking about ecosystem health," Daley said.