Could drones spray crops? EPA is considering it 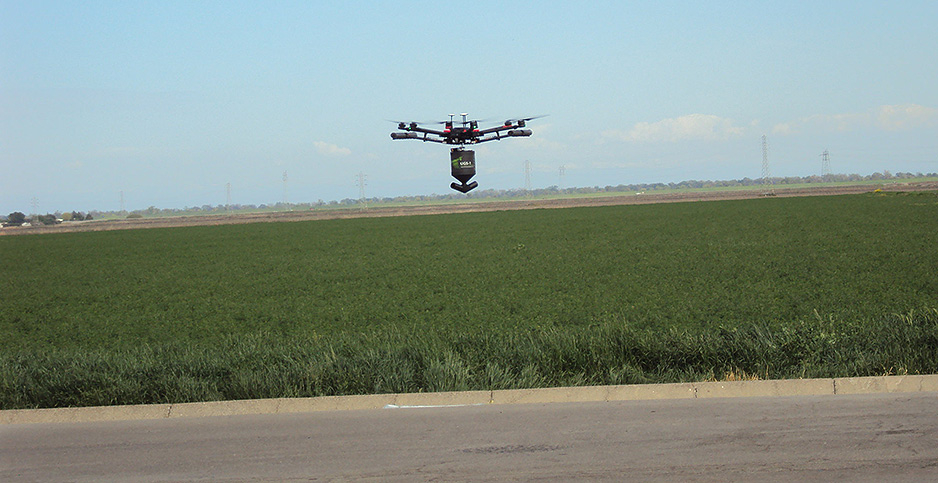 For farmers worried about pesticides drifting where they don’t belong, an intriguing possibility continues to unfold: Could drones do a better job than people?

The use of unmanned aerial vehicles for pesticide application is a focus of discussion at EPA, where a working group is collecting information and mulling how the practice might be regulated to protect public health while encouraging emerging technology.

To proponents, UAVs promise to take potentially dangerous chemicals out of human hands and allow for more precise application in fields and forests. They’re part of a wave of technology, including robotics, that is poised to transform American agriculture, said Edward Messina, deputy office director for programs in EPA’s Office of Pesticide Programs, at an agency advisory committee meeting earlier this month.

EPA officials said they hope to bring agency working groups together to look at protocols for UAV use with pesticides, and to determine what kind of formal risk assessments EPA may need to draft. While drones might be less risky than sending workers into fields with sprayers attached to backpacks, they said, officials are looking for university studies and other sources of hard information.

A major question is whether the chemicals have less chance of drifting onto neighboring property, where they could make people sick. Weedkillers could destroy crops not bred for resistance. Organic farmers wouldn’t be able to sell their crops if exposed to conventional pesticides.

Assessing the risk of spray drift from drones is "pure conjecture" for now, said Leo Reed, manager for certification and licensing at the Office of the Indiana State Chemist, and president of the American Association of Pesticide Control Officials.

"Studies regarding spray drift and UAVs have not been conducted to any large extent," Reed said, although a technology working group at AAPCO is delving into the question.

Traditional agricultural aviators have raised concerns, as well, citing differences between the aircraft and the lack of piloting licenses needed for unmanned aerial systems.

"For UAS, the process is dramatically less rigorous and a lesser safety standard is utilized for certification and continued airworthiness," the National Agricultural Aviation Association wrote to EPA Administrator Andrew Wheeler earlier this year. "We feel strongly that this is an important consideration of environmental safety as the unintended consequence of a lesser safety standard for aircraft that are unmanned is a greater risk of accidental pesticide discharge."

EPA has had a few requests from companies wanting to register pesticides for use with drones, and the issue seems to be building momentum, Messina said.

One company, Yamaha, is already engaged in the practice on vineyards in California’s Sonoma and Napa valleys. Use of UAVs is more widespread in Japan, where more than 2,000 units spray about 40% of the rice acreage, said a Yamaha spokesman, Brad Anderson.

Anderson told E&E News the company doesn’t see the unmanned aircraft as a replacement for more conventional methods. Among other challenges, they’re small and can’t carry much pesticide for big farms. "We don’t believe a UAV will always be the right platform, but we believe there can be situations where they can be advantageous."

The pesticide control officials’ organization surveyed its members earlier this year on regulation of UAVs, which weren’t much in use when labels were written for various chemicals, said Liza Fleeson Trossbach, AAPCO’s representative on EPA’s Pesticide Program Dialogue Committee.

Trossbach, the program manager for Virginia’s Office of Pesticide Services, said the most interest in UAVs seems to come from forest managers and tree-based operations, such as Christmas tree farms, rather than from specialty crops.

Other survey results show that states are only somewhat prepared for the emerging use. While 34 states — or 74% of respondents — said they’ve received requests to use UAVs for pesticides, only 17 states said they have pesticide applicators certified to do so or have companies legally allowed to apply pesticides with UAVs.

Farm chemicals and UAVs also run into multilayered oversight. EPA is in charge of issues such as what can be sprayed, at what rates and with what equipment such as spray nozzles. Meanwhile, the Federal Aviation Administration dictates the airspace rules for drones as well as what can be sprayed from manned aircraft. The FAA has approved Yamaha’s device, which resembles a miniature helicopter.

Some regulations are out of date. One FAA rule that forbids dispensing pesticides from airplanes contrary to safety instructions refers to pesticides registered with the Department of Agriculture, even though EPA took over that responsibility in 1972, said Ryan Petty, a Harvard University professor, in the Harvard Journal of Law & Technology in 2018.

In some cases, he said, the U.S. is falling behind other countries — especially Japan and China — in adopting the technology. Failure to keep up may cost the U.S. as much as $10 billion a year in lost productivity, Petty said.

Homeland Security officials may play a role too, an industry source said, given the risk that chemical-dropping UAVs could be used for nefarious purposes.

Environmental groups haven’t quite mobilized on drones in the U.S. But the global organization Pesticide Action Network has complained about their use in India, prompting the government there to warn in February that the practice is illegal.

In the United States, the Pesticide Action Network warns against pesticide drift generally.

"Even the most careful, responsible pesticide sprayer cannot control what happens to pesticide droplets once they are released from a plane or tractor," the group said on its website. "Too often, these droplets end up settling in someone’s yard, mixing with dust in someone’s house, landing on another farmer’s crops, or coating the skin of someone who happens to be at the wrong place at the wrong time."