Could earmarks come back? Some GOP leaders hope so 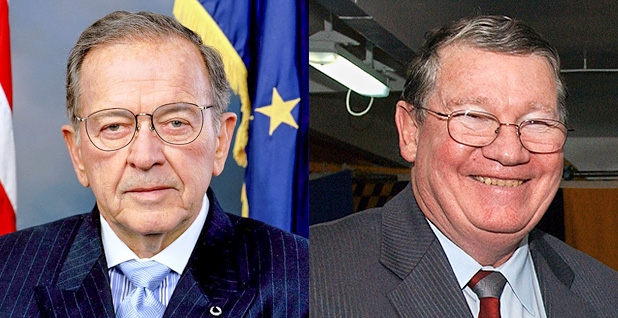 (From left) The late Sen. Ted Stevens (R-Alaska) and former Rep. Randy "Duke" Cunningham (R-Calif.) both got into trouble for their use of earmarks. Photos by Congress (Stevens) and Photographer's Mate 3rd Class Kitt Amaritnant (Cunningham), courtesy of Wikipedia.

Congress is closer than it’s been in several years to allowing lawmakers to once again earmark federal dollars, but conservative resistance and perhaps the Trump White House could still derail the effort.

The House Rules Committee will hold hearings over the coming months that for the first time since earmarks were banned in 2010 will put lawmakers on record about bringing them back. The panel could offer a recommendation to the GOP conference by midyear and, if there is enough support among Republicans, the restrictions could be lifted.

"We have been talking about it for a few years — no one has wanted to take it on. We’ll see where the hearings go. They are doing it the right way you ought to do it in public because it’s so easy to demagogue if it’s done behind closed doors," said Rep. Mike Simpson (R-Idaho), the chairman of the House Energy and Water Appropriations Subcommittee, who supports the push.

Earmarks, the practice of members directing dollars for specific federal programs, projects or recipients, have long been used on Capitol Hill for lawmakers to steer dollars back to their districts. The directed spending has been most common on the 12 annual appropriations bills, although it has also been a staple of transportation and water projects funding packages, too.

But in the 2000s, the use of earmarks exploded and they became a symbol of federal waste, accounting for more than $10 billion in annual spending, and unethical and even criminal behavior.

One former member, Rep. Randy "Duke" Cunningham (R-Calif.), went to prison for steering dollars to defense contractors in exchange for bribes; another legendary appropriator, the late Sen. Ted Stevens (R-Alaska), lost a re-election bid after a federal conviction on charges related to his use of earmarks. (Stevens’ conviction was later voided due to prosecutorial misconduct.)

When Republicans took back control of Congress in 2010, banning earmarks was an easy target. Conservatives were eager to be seen as taking an ax to federal spending, and the GOP framed it as cleaning up the House with tighter ethics rules.

The Senate only reluctantly went along with the ban rather than risk torpedoing bicameral spending and other funding bills. If the House lifts it, the Senate would likely do the same.

House Rules Chairman Pete Sessions (R-Texas) said Congress brought the ban on itself with its misdeeds. But he now believes it has gone too far and taken power away from the legislative branch.

While budget caps have helped to hold the line on spending, he said, billions of dollars in annual discretionary spending is now directed by federal agencies, not lawmakers.

Sessions said lawmakers best know the needs of their districts, not federal agencies, and should be able to earmark at least some of those discretionary dollars.

For example, he said, a House member would know which community in his or her district needs more money for overhauling a water system or fighting wildfires.

Sessions’ argument is being echoed by other members who frame earmarks as taking back the power of the purse. They say, though, that any return would have to come with some changes.

"I’d like to see us do responsible, transparent member-directed spending. If we limited so-called earmarks to responding to requests of local city councils, state legislatures, state and local governments, that would be responsible," said Rep. Hal Rogers (R-Ky.), the former Appropriations chairman once described by a local newspaper as the "prince of pork" for his ability to steer dollars to his coal-country district.

Rogers and other backers, including nearly all appropriators, know the ban must remain in place for money going toward private entities, such as government contractors. The absence of one helped fuel earmark scandals in the 2000s.

Another argument for earmarks, less likely to be made publicly by lawmakers, is that they give leaders an additional tool to get members to back spending legislation. It’s not a coincidence that since 2010 Congress has sent very few individual annual spending bills to the president.

"Appropriations bills are a lot easier to move if members know there are projects in there for their districts," said Stan Collender, an executive vice president with the Qorvis MSLGROUP who is an expert on fiscal issues. Collender said lobbyists would cheer the return of earmarks as they have a track record of collecting hefty fees to secure them for clients.

While many mainstream Republicans and most Democrats are open to earmarks, they face obstacles from conservatives and budget hawks in the House.

Most prominent is House Speaker Paul Ryan (R-Wis.), who scrapped a vote on reviving earmarks late last year in the GOP conference. Instead, Ryan, who has long opposed earmarks as wasteful spending fraught with ethical perils, called for hearings and committed to reconsidering the ban in six months.

Tea party conservatives, many of whom have only been in Congress with the ban in place, might also be able to block an earmark resurrection.

"We are supposed to be fiscally responsible. The way that my constituents would view that is I want to add pork to a spending package. Whether it’s accurate or not, that’s the way it’s perceived," said Rep. Mark Meadows (R-N.C.), the chairman of the House Freedom Caucus, which comprises about four dozen of the chamber’s most conservative members.

Moreover, conservative groups, like the Heritage Foundation and Club for Growth, are likely to push back hard against a repeal. The nonpartisan Citizens Against Government Waste recently held a news conference chiding Congress over "pork-barrel spending" that featured a pig mascot.

Even some veteran conservatives, whose seniority could help them land earmarks, share those views.

"It is not wise to once again get involved in the sordid business of earmarks. If we’re not trusted with the small things, we will never be trusted with the large," said Rep. Jeb Hensarling (R-Texas), the chairman of the Financial Services Committee and a close ally of Ryan.

But he said it could still be scuttled if the Trump White House — with its "drain the swamp" mantra — rallies against it as it did with a proposal to change ethics rules at the start of the Congress. Cole said the GOP cannot be simply seen as bringing them back because it now controls both the White House and Capitol Hill.

The administration has yet to weigh in on earmarks.

Rogers is cautiously optimistic that the debate has turned a corner, saying, "I think there is beginning to be a lot better reception, but we’ll see how things go."