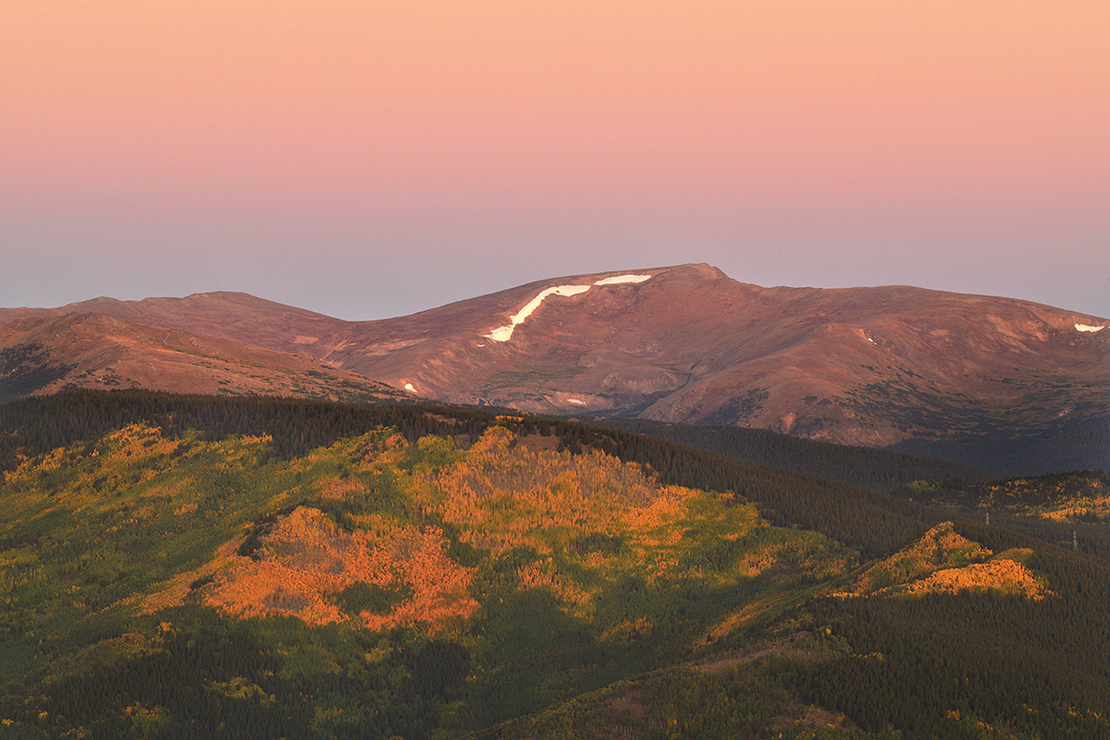 A view as autumn colors in September 2019 took over the Colorado high country in Idaho Springs. A Colorado state panel this month recommended that a peak west of Denver, Squaw Mountain, be renamed to Mestaa'ėhehe Mountain after a Cheyenne woman who facilitated relations between white settlers and Native American tribes in the early 19th century. Hyoung Chang/The Denver Post/Associated Press

One offensive moniker at a time, U.S. maps are getting scrubbed of a racist past.

For now, a long-standing federal board continues to take individual votes on proposals to change names such as Squaw Mountain in Colorado, Negro Creek in Illinois and Jeff Davis Creek in Montana, all of which were included on the most recent review list.

But while the Board on Geographic Names’ Domestic Names Committee at the Interior Department makes case-by-case decisions at monthly meetings, some hope to streamline the process (Greenwire, June 17, 2020).

“The Department recognizes the offensive nature of some place names. We are reviewing the options available for renaming places, including authorities that can be taken by the Secretary, to better address a number of names that do not reflect who we are as a nation,” Interior Department Communications Director Melissa Schwartz said in an email this week.

On Capitol Hill, companion bills have been introduced to establish an Advisory Committee on Reconciliation in Place Names. The proposed panel would advise the Board on Geographic Names on renaming geographic features, perhaps identifying certain offensive words they want to replace at multiple locations around the country.

“Derogatory terms … should not be included in the names of geographical places across the landscape of our nation. These terms are harmful relics from the era of invidious yet lawful discrimination that must be removed from public property,” Rep. Al Green (D-Texas) said in July.

The legislation currently has six co-sponsors in the Senate and 27 in the House, all Democrats.

The bill was originally introduced in the last Congress by Interior Secretary Deb Haaland, who then represented a New Mexico district in the House.

"There are too many places and geographic features around the country that still have names that are racial slurs or derogatory terms, which make visitors feel uncomfortable and discourage them from enjoying the outdoors," Haaland told the Outdoor Industry Association in December (Greenwire, Jan. 20).

There is precedent for this action. In 1963, the Interior secretary directed that a racist slur referring to Black people used in many place names on federal maps be changed to "Negro" — which itself is now a word that people want changed. The BGN in 1974 directed that the word "Jap" in geographic names be changed to "Japanese."

Most changes, though, are considered on a case-by-case basis.

In fiscal 2020, the board considered 160 domestic proposals, of which 133 new names and changes were approved and 27 were disapproved. The board, among other actions, approved a proposal to change the name of Jeff Davis Peak in California to Da-ek Dow Go-Et Mountain, a name from the Washoe Indian language.

In fiscal 2019, the Board on Geographic Names considered 165 domestic proposals, of which 138 new names and changes were approved and 27 were disapproved.

Every name has a past, though it is sometimes hard to separate fanciful from fact.

“Drunken horsemen galloping by at night often fired random shots at the red, white and blue target while hurrahing lustily for Jeff Davis,” one local 1921 history said of one site.

“All three were named after a white supremacist slave-owner and defender of slavery who declared war against the United States resulting in the deaths of three-quarters of a million Americans. Montana deserves better,” the proposal stated.

In the not-so-distant past, officials were less sympathetic to name change proposals.

In 1955, for instance, a board history recounts that it dismissed public objections to names including Jew Point in Florida, with the board stating at the time that “the names will not be changed on the basis that some people consider them derogatory.”