Could it happen again? 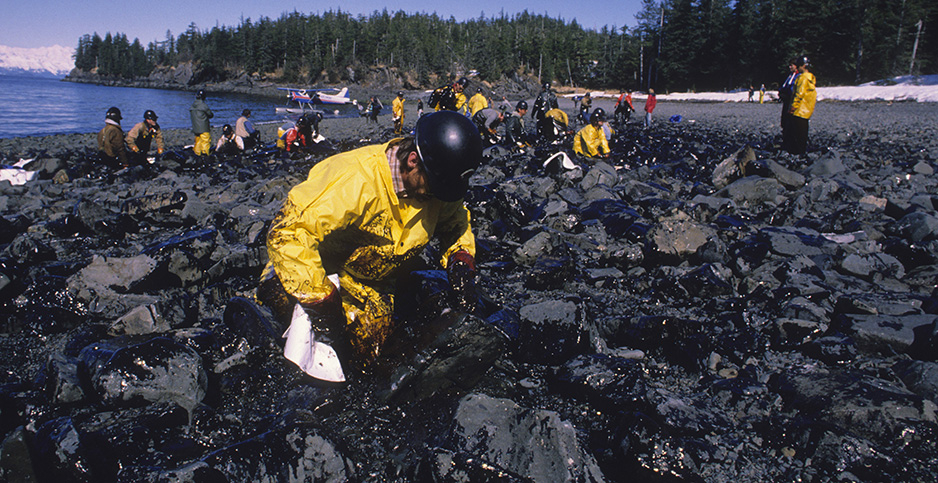 Edward Jones of Valdez, Alaska, wiped oil off of the rocks on the shoreline of Cabin Bay on Naked Island in Prince William Sound, on April 13, 1989, after the oil spill of the Exxon Valdez. Bob Hallinen/MCT/Newscom

Since the disaster, oil transportation in the world’s vast oceans has improved. Volume of oil spilled by tanker has trended downward. Monitoring technology has advanced. Awareness worldwide has heightened.

But some worry that the provisions have become outdated and that prevention, rather than cleanup, should be the focus, particularly in newly expanding shipping through Alaska’s Arctic waters.

"Once a spill has happened, you have basically lost the war," said former marine conservation professor Rick Steiner, who was in nearby Cordova, Alaska, the night the 987-foot-long oil tanker ran aground.

At 12:04 a.m. on Friday, March 24, 1989, the cracked hull of the Exxon Valdez oil tanker spilled 11 million gallons of crude into the milky, aqua-blue waters of Prince William Sound, devastating wildlife and the environment in one of the most significant and well-televised environmental disasters in American history.

The oil ultimately reached 1,300 miles of shoreline and killed thousands of animals, with some species never to recover.

People protested in the streets of Anchorage and across the country. Americans were inundated with images of oil-covered birds and sea lions, and dead whales washed ashore, amid a volume of oil equal to 125 Olympic-sized swimming pools, according to the National Park Service.

What many Americans remember about the fateful crash was the role played by the alleged intoxication of the captain, Joseph Hazelwood.

But the response to the spill was wide-ranging. The Oil Pollution Act of 1990, which followed, implemented measures meant to protect against the many things that went wrong that night.

A lot changed about how oil tankers move and operate, and oil spilled from tankers has dropped by more than 90 percent since then, Andrés Morales, director of prevention and response at Alyeska Pipeline, told Alaska Public Radio earlier this month.

And it required captains to be drug tested. The National Transportation Safety Board ultimately attributed some of the blame to Hazelwood’s "impairment from alcohol" and Exxon’s "failure" to provide a rested, sufficient crew, though Hazelwood was never convicted of a crime.

Other possible issues included the ship’s third mate being tired and overworked, a failure on the part of the Coast Guard to offer an effective vessel traffic system, and a lack of useful "pilot" and escort vessels, according to NTSB.

Billions have been spent to clean up Prince William Sound, and today, oil transport in the sound has become a carefully controlled enterprise. Each ship has tugboats escort it from port to ocean to help steer and respond if necessary.

Alaska has a much more intensive ship escort and response vessel system, and an ocean rescue tugboat is stationed at the entrance to Prince William Sound to assist tankers. Intensive training is required for a wide range of safety officers and tanker pilots. The Coast Guard has a more detailed ship-tracking system, and ships are equipped with ice radar.

The state and federal government settled on about $1 billion in restoration funds, but litigation for harmed Alaskans stretched on for 26 years to settle how much Exxon Shipping Co. should pay.

The 1990 law actually banned the vessel Exxon Valdez — renamed the Exxon Mediterranean after it was fixed up — from operating in Prince William Sound, according to NOAA. The ship was ultimately renamed several times: the Sea River Mediterranean, the Dong Fang Ocean and ultimately the Oriental Nicety, once sold for scrap and ultimately beached in 2012.

‘We really need to double down’

Alaskans have not forgotten the impact of the 1989 spill, and some are worried that the improvements it brought on are severely outdated.

"The answer 30 years ago is not the answer today," said Ed Page, executive director of Marine Exchange of Alaska. "We really need to double down on prevention."

But most of the changes since 1989 have centered on responding to spills rather than preventing them.

And environmentalists say, at that point, it’s too late.

Page, who was in the Coast Guard in 1989, likened regulating spill prevention to policing auto traffic.

"If you have a police car or radar gun every 200 yards, you wouldn’t have anyone speeding," he said, adding that the Coast Guard instead puts "an ambulance every quarter-mile."

Steiner, the former marine conservation professor, said, "Spill response simply does not work, never have and likely never will."

There are remaining environmental impacts from the Exxon Valdez spill, 30 years later.

Crude oil residue can still be found on the shores of Alaska.

As many as 250,000 seabirds, 2,800 sea otters, 300 harbor seals, 250 bald eagles, 22 killer whales, and billions of salmon and herring eggs were estimated to have been killed in the spill, though most carcasses sank, making it difficult to count accurately, according to the National Park Service. The Pacific herring, pigeon guillemot and marbled murrelet have not recovered, according to the state.

A genetically distinct pod of orcas that was particularly hard hit by the spill is not expected to recover. There are only seven left, and no reproductive females. Research shows they will go extinct, Steiner said on Alaska Public Media’s "Talk of Alaska" earlier this month.

Steiner, an environmental activist, has called for further protections in the Bering Strait, the ribbon of the Pacific separating Alaska and Russia, where the shipping season is growing longer in the wake of climate change.

"We need a powerful ocean rescue tug stationed in Bering Strait during the [ice-free] shipping season to escort all ships," he said.

Steiner ticked off a number of what he called necessary measures: "site-specific vessel speed restrictions, marine mammal strike avoidance technologies/measures and observers, vessel size and hazardous cargo restrictions, prohibition on use of heavy fuel," among other things.

He argued that the money to do those things is in the bank, if only Congress would make it available, pointing to the $6.5 million sitting in the Oil Spill Liability Trust Fund. For nearly 30 years, oil companies paid a 9-cent-per-barrel tax on crude at the refinery.

The fund was initially set up before the spill, but lawmakers crafted legislation directing federal officials on how to spend the money after Exxon Valdez.

But no more. Congress did not renew authorization for the fund last year, and it expired Jan. 1. Environmentalists argue that means a 9-cent-per-barrel windfall for oil companies.