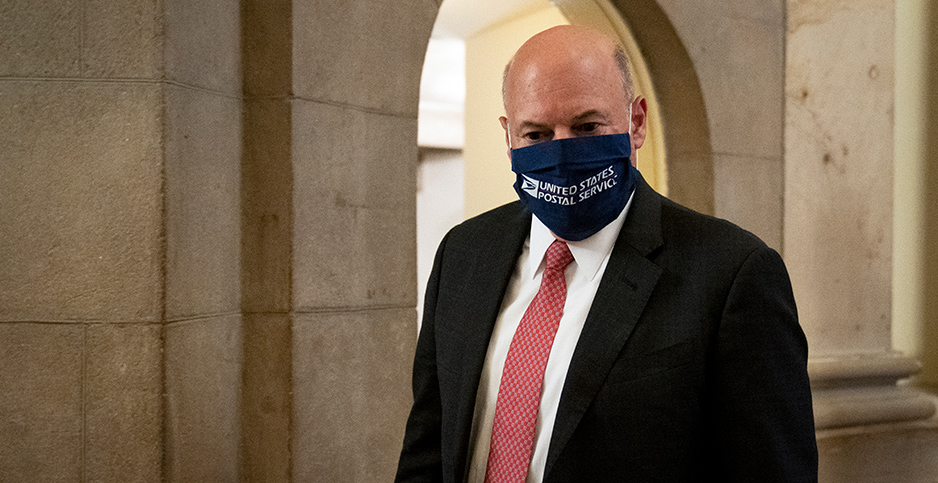 U.S. Postal Service reforms that have sparked a political firestorm across the nation could encounter an unlikely obstacle: the National Environmental Policy Act.

New Postmaster General Louis DeJoy has denied claims from critics and has defended any moves as addressing drops in letter volumes, but Democrats — fueled by comments from President Trump — see an effort to undermine mail-in voting.

Politics aside, environmental experts have noted that significant changes in how the Postal Service operates could trigger the need to conduct environmental analysis.

"The statute says you have to look before you leap," said Michael Gerrard, director of the Sabin Center for Climate Change Law at Columbia University.

Under NEPA, agencies are required to study the environmental impacts of major federal actions. Postal Service reforms could fall under that category.

While environmental analysis for postal actions is rare, it has happened. In 2017, USPS conducted an environmental assessment for purchasing commercial vehicles to accommodate route growth.

Specifically, according to the agency’s NEPA regulations, USPS would be required to complete environmental analysis for cutting 1,000 or more workers, relocating 300 or more employees more than 50 miles, or changing a facility’s function to include new uses of "greater environmental intensity," among other things.

Those metrics are rather opaque and environmental review could be waived, experts noted. In addition, exactly what changes USPS has carried out in recent weeks is somewhat murky. Details have come out sporadically through union and press reports, Gerrard said.

"It’s not as if there is an announced plan," he said. "It’s clear that they are doing it, and the intent has also become very clear."

David Partenheimer, a USPS spokesman, said in an email that the moves changed the organizational structure only. "The announcement did not include any terminations or layoffs and very specifically stated that the changes did not initiate a reduction in force and there were no immediate impacts to USPS employees," he wrote.

On Tuesday, DeJoy — a Republican donor and Trump ally who owns millions of dollars in USPS competitor stock — announced he would pause changes until after the November election.

"The Postal Service is ready today to handle whatever volume of election mail it receives this fall," he said in a statement.

"Even with the challenges of keeping our employees and customers safe and healthy as they operate amid a pandemic, we will deliver the nation’s election mail on time and within our well-established service standards."

Still, the scandal — which many Republicans call a conspiracy — had already sparked congressional intervention.

Tomorrow, the Senate Homeland Security and Governmental Affairs Committee will hold a hearing on the issue, largely at the prodding of Democrats.

"There is simply no excuse for why Postmaster General DeJoy began instituting changes that have severely disrupted service for Michiganders and people in communities all across the country during an unprecedented public health and economic crisis," said ranking member Gary Peters (D-Mich.) in a statement.

"While it is a positive development that the Postmaster General says he will be temporarily rolling back some of these harmful changes as I have demanded," Peters said, "there are still too many unanswered questions."

The House plans to return from recess this weekend to vote on legislation, H.R. 8015, meant to return the Postal Service to pre-DeJoy service.

Oversight and Reform Chairwoman Carolyn Maloney (D-N.Y.), who sponsored the bill, is demanding documents from DeJoy by tomorrow and holding a hearing with him Monday.

"[T]his fight for the public Post Office is far from over," the union wrote. "The Covid-19 induced economic crisis is deeply affecting the projected finances of the United States Postal Service."

The group said, "In order for postal workers to continue to carry out their vital work and deliver for the people every day, the USPS is in immediate need of $25 billion in Covid-related financial relief. It’s time for Congress to deliver."