Could oceans yield a defense for COVID-19? 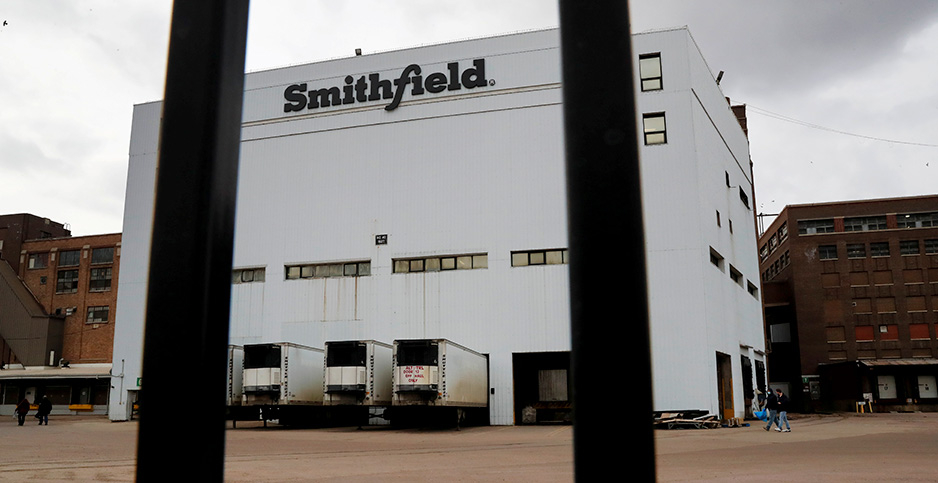 Meatpacking plants looking to stop the spread of COVID-19 may find an answer in an unexpected place: the ocean.

A nasal spray made from seaweed is one of the treatments researchers are touting as potentially helpful in settings like meat processing facilities, where workers do their jobs indoors, in close quarters, and are especially at risk of infection with the new coronavirus.

The meatpacking industry could use the help. Thousands of workers at meat plants have fallen ill during the pandemic, forcing temporary plant closures. The Centers for Disease Control and Prevention reported that 929 cases broke out at a single plant — a Smithfield Foods facility in South Dakota — between March 16 and April 25, representing a quarter of the plant’s workers. Two died.

The CDC said that most of the cases were among nonsalaried workers whose jobs involved being within 6 feet of one another, and that measures such as face masks, hygiene and physical barriers — all since implemented, the company told E&E News — could help prevent the virus’s spread.

The nasal spray, called iota carrageenan, is better known as a food thickener that’s approved in the U.S. for that purpose.

Austrian researchers published a study two years ago that indicated it inhibits coronaviruses and other respiratory viruses, and updated their information in a recent paper on the new coronavirus that causes COVID-19.

According to their research, the spray works by creating a barrier on mucus membranes in the nose, which stops viruses from entering cells there.

It’s an interesting idea that bears further study, said Govindaraj Dev Kumar, an assistant professor at the University of Georgia’s Center for Food Safety, who cited it in a summary of possible treatments.

The seaweed-based solution is far from alone among measures that could be used in the food supply chain. Kumar and other researchers at the University of Georgia explored several in a review of scientific literature, publishing their findings in the June issue of the online journal Frontiers in Microbiology.

"Workers in the food, retail, service, and health industries normally come in close contact with a large number of individuals during the work day," they said.

"Recent shut downs of meat processing facilities that have established sanitation programs due to spread of SARS-CoV-2 among workers indicates the importance for new control strategies to spread the transmission of the virus," the researchers said.

The researchers figured the food industry already uses a lot of compounds in facilities and should explore which of those might help with the coronavirus, said Laurel Dunn, an assistant professor at UGA, who co-wrote the paper.

"What do they have already that works?" Dunn told E&E News. "We don’t have any silver bullets on this until someone hopefully comes up with a vaccine."

While other parts of the food supply, including fruit and vegetable production, are grappling with coronavirus risks, Dunn said, "I don’t think it’s to the extent the meatpacking industry is."

The Georgia scientists also pointed to a range of antimicrobials, including povidone iodine and better-known compounds such as hydrogen peroxide, sodium hypochlorite and alcohols. The iota carrageenan, as a food ingredient, was outside the ordinary.

"The use of iota-carrageenan nasal sprays could be used as a method to prevent infection transmission among workers in food processing facilities," they said.

Hygiene and other preventive measures have taken on additional importance as the meat industry — deemed an essential business by the Trump administration — recovers from shutdowns. Plants overall are running at greater than 95% of capacity compared with a year ago, on average, the Department of Agriculture said yesterday.

Smithfield Foods has taken a wide range of measures to protect workers and help those who’ve fallen ill, a spokesperson said. Those include spending tens of millions of dollars on personal protective equipment, such as millions of face masks and face shields, as well as thousands of sanitizer stations, the company told E&E News.

Its response, Smithfield said, includes "a series of stringent and detailed processes, protocols and protective measures" that meet or exceed standards set by the CDC and the Occupational Safety and Health Administration. Social distancing is in place "wherever possible," as well as enhanced cleaning and disinfection, the company said.

"Our COVID-19 response has focused exclusively on two things — keeping employees as healthy and safe as possible and fulfilling our obligation to the American people to maintain the food supply," Smithfield said in statement.