Could Perry lead the ‘oops’ agency he vowed to kill? 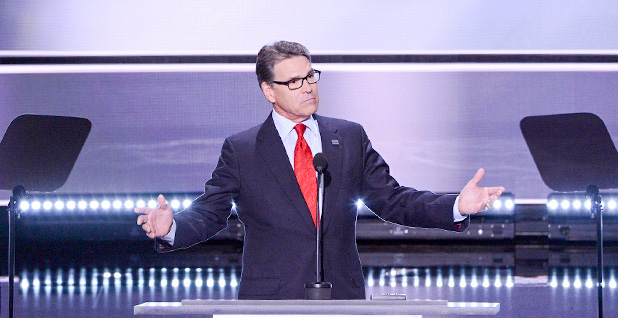 Former Texas Gov. Rick Perry became the butt of jokes five years ago when he forgot the name of the agency he wanted to eliminate in a nationally televised presidential debate.

It was the Department of Energy.

"It’s three agencies of government when I get there that are gone, Commerce, Education and the, uh, what’s the third one there?" Perry said during the CNBC Republican presidential debate. "The third one I can’t, sorry. Oops" (E&E Daily, Nov. 10, 2011).

Today, Perry is rumored to be a top contender for leading that agency in the Trump administration.

He’s meeting with President-elect Donald Trump in New York today and — according to The Wall Street Journal — is at the top of the real estate mogul’s list to lead DOE.

The Perry appointment may make sense given Trump’s announcement today that Thomas Pyle, president of the American Energy Alliance and a former lobbyist for Koch Industries and the National Petrochemical and Refiners Association (now American Fuel and Petrochemical Manufacturers), is leading the next administration’s DOE transition effort (see related story). Pyle has advised Perry on energy issues in the past, The Washington Post reported in December 2014.

But Perry’s nomination could get pushback on Capitol Hill.

Perry is currently on the board of directors of Energy Transfer Partners LP, a Dallas-based company building the $3.78 billion Dakota Access oil pipeline, the target of protests in North Dakota (see related story).

Perry was governor of Texas from 2000 to 2015 and lieutenant governor from 1998 to 2000. He also served as agriculture commissioner from 1994 to 1998 and before that was a member of the Texas House of Representatives.

When campaigning to win the GOP presidential nomination last year, Perry repeatedly vowed to make immediate changes in the energy sector if elected president, including approving permits for the Keystone XL pipeline and authorizing the export of domestic oil and gas. He also vowed to "issue an immediate freeze" on any pending regulations (E&ENews PM, June 4, 2015).

As DOE secretary, Perry could indeed have a hand in the department’s pace of approving exports of domestic liquefied natural gas, an issue that’s needled oil and gas executives who claim the process is moving too slowly. Perry has also called for the acceleration of energy exports to combat Russian aggression in Europe, a sentiment recently echoed by Republicans and industry executives.

Perry would also have a say over the Yucca Mountain nuclear waste repository in Nevada, a project he said he opposed in 2011 during a separate presidential debate (E&ENews PM, Oct. 19, 2011).