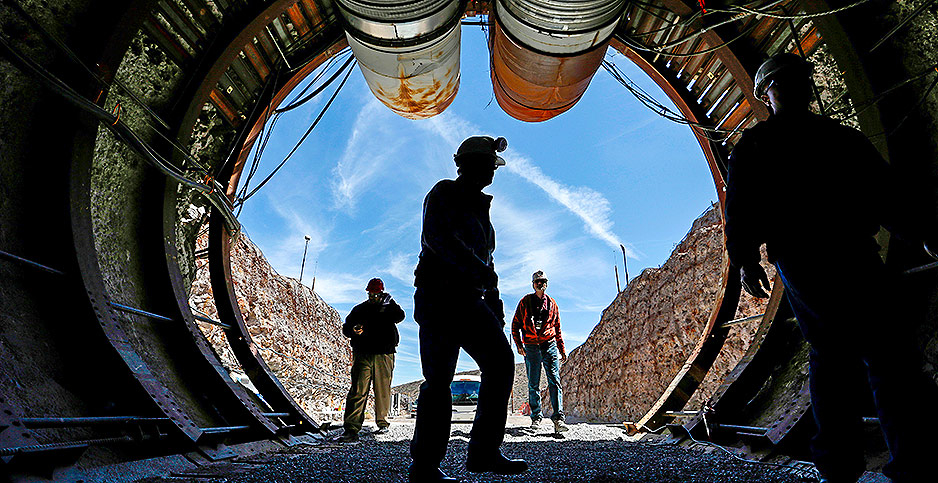 People walking into the south portal of the Yucca Mountain nuclear waste repository during a 2015 tour. John Locher/Associated Press

Amid the ongoing political fight over the Yucca Mountain nuclear waste repository in Nevada, it’s easy to forget there’s a daunting legal battle looming, too.

If the Trump administration secures funds to resume licensing for the long-stalled project, it would kick off a legal process that some say could take up to five years and as much as a billion and a half federal dollars.

The state of Nevada, which has fiercely opposed the project since it was first proposed in the 1980s, has successfully submitted 218 legal contentions to Yucca Mountain and is planning to add another 30 to 50, according to Robert Halstead, who heads the state’s Agency for Nuclear Projects.

Those contentions span a huge range of issues and touch on topics from climate change to volcanism to "piddle packs" used by fighter pilots to relieve themselves during flights.

If the project does return to the licensing phase — which depends on Congress agreeing to appropriate funds for the work — the Nuclear Regulatory Commission will convene one, two or three three-member boards of administrative law judges to adjudicate the legal issues.

After months — or years — of legal maneuvering and preparations, the proceedings would begin in earnest.

"The state will try to throw everything against the wall and hope something sticks," said Lake Barrett, a former DOE official whose career included top positions at the agency’s nuclear waste office.

Halstead said Nevada currently is prepared to adjudicate around 120 of its 218 existing contentions.

"We met with our team in June, and said, ‘OK, guys, we’ve got another hundred or so, plus the new ones; it’s time to get everything up to speed,’" he said.

The Department of Energy is getting ready to ramp up, too. It wants to bring on 83 new full-time staff members to work on both Yucca Mountain licensing and the development of an interim nuclear waste storage program, according to a fiscal 2018 budget request justification. Fifty-three of those staffers will be reassigned from other programs, while 30 will be new hires.

DOE also plans to send money to a handful of its national laboratories to prepare the scientific grounds and assemble expert witnesses to help make its legal arguments. More than $35 million of that would be directed to Sandia National Laboratories, with funds also allocated to the Argonne, Idaho, Lawrence Berkeley, Oak Ridge and Pacific Northwest labs.

"DOE has the burden of proof in the hearing process," the agency wrote in its budget justification.

Sixteen of Nevada’s contentions are on National Environmental Policy Act grounds, meaning that they challenge various aspects of DOE’s environmental impact evaluations of the project.

"Winning on a NEPA contention means that DOE and/or NRC have to go back and rework their environmental impact statement," said Halstead.

The bulk of the legal arguments, around 200 of them in total — and potentially the most powerful — are the safety contentions.

"You only have to win one really good safety contention to send this whole thing back to square one," said Halstead.

Barrett said that rather than one up-or-down decision on the contentions, they will be judged item by item. "The state’s view is, if I can delay any one item, that’s all I need," he said. "My view is, the state is weak on the scientific merits because so much work and research has been done."

The safety contentions are divided into two categories: pre-closure and post-closure.

About 50 of the safety arguments fall into the pre-closure category. Essentially, these contentions argue that DOE has failed to adequately ensure that workers and the public will be safe while the repository is being operated and before it is permanently sealed.

According to DOE’s plans, the site would operate for 50 to 300 years and would hold 70,000 tons of nuclear waste before being permanently sealed.

Ten of those arguments deal with the possibility of an aircraft crash at the site. Nevada will argue that DOE’s Safety Analysis Report — a document spanning thousands of pages — is inaccurate or incomplete in its analysis of the risks of an airplane crashing into the repository.

For one, the contentions state, DOE has not developed a mechanism for controlling or monitoring the number of aircraft flying through planned restricted airspace around the project. The state also will take to task DOE’s calculations of the frequency of aircraft crashes. The Yucca Mountain site sits on the edge of the military’s Nevada Test and Training Range.

The contentions go into granular detail. One contention alleges that DOE has not done anything to prevent pilots from using devices called "piddle packs" while flying over the proposed restricted airspace.

The DOE’s safety analysis says that the use of piddle packs, which allow fighter pilots to urinate during flights, would be prohibited in the restricted airspace because they are a "special activity for personal comfort."

But according to Nevada’s contention, there is no rule currently in place prohibiting the use of the piddle packs in flight.

The largest chunk of safety contentions — about 150 — revolve around issues that could come post-closure. These are arguments that strike at DOE’s key claim behind its license application to move forward with Yucca Mountain: that it is safe to permanently dispose of spent nuclear reactor fuel at the site.

The question of whether the repository can prevent groundwater from being contaminated is a key issue. EPA regulations would limit groundwater contamination to 15 millirems per year for 10,000 years and 100 mrem/year for 990,000 years.

Nevada says, counter to the federal government’s claims that only a small amount of contamination would occur, that the first standard could be exceeded in 900 years and the second in 2,000.

Among the post-closure arguments, many have to do with titanium alloy drip shields that are meant to stop radioactive materials from moving into the environment around Yucca Mountain in DOE’s plans for the site.

Nevada will argue that those barriers will be difficult to install and that DOE’s promise to build them is "meaningless and unenforceable" because of both physical constraints and budgetary uncertainty.

The consequences of these alleged errors in the agency’s calculations could be significant, Nevada will argue, because factors like increased or more extreme precipitation or flooding events could affect how much radiological material spreads.

Then, of course, there are the volcanoes. According to Nevada, DOE has made mistakes in its estimations about the likelihood of volcanic activity occurring at sites near the proposed repository.

The state’s claim goes on to say that an eruption 78,000 years ago at the Lathrop Wells volcano could represent the beginning of a new "super-episode" of volcanism.

An eruption near a nuclear waste repository could have disastrous consequences, damaging the facility and potentially resulting in the widespread dispersal of radioactive materials.

Beyond the scientific merits of the hundreds of contentions, there are complicating procedural factors, too.

For one, there are more than a dozen other parties to the proceedings that also have brought contentions. They include the Nuclear Energy Institute, multiple Native American groups and Nye County, Nev. — which has been supportive of the project, citing economic gains — as well as the states of South Carolina and Washington. Even fitting the representatives from every intervenor into a conference room could present a challenge.

There are other uncertainties, too, for example, about where the proceedings would take place; that decision has not been made yet, and options include existing facilities in Las Vegas or elsewhere in Nevada, or at NRC’s headquarters in Rockville, Md.

The question of how many panels will hear the question is up in the air, as well — it could range from one to three, which could drastically affect how long the proceedings take.

The NRC moved to start getting ready to deal with some of those determinations earlier this year, authorizing $110,000 in previously appropriated money to use for licensing preparations (E&E News PM, Aug. 8). But that sum pales in comparison to the $30 million the agency has requested from Congress to resume licensing.

By far the biggest battle to be fought is between DOE and Nevada.

Barrett, the former DOE official, summed up the state’s goal as being a dilatory one.

"Nevada will be looking to drag this out, to delay it, drive up this cost, to make the government say, ‘It’s not worth doing,’" said Barrett.

It’s a fight the state says it is ready for.

"We’re very well-prepared. This is because, frankly, our state Legislature has been willing to appropriate all the funds we asked for," said Halstead.

The Nevada Legislature has agreed to spend $3.6 million per year for the next two years for the Agency for Nuclear Projects and the attorney general’s office. Nevada has estimated it will need $8 million to $10 million per year for licensing, although the various aforementioned uncertainties could lead that figure to balloon.

All of this relies on a fairly big "if": DOE’s funding for the licensing project is at the mercy of appropriators. A fiscal 2018 spending bill that passed the House last month included $120 million for the project, but an early version of its Senate counterpart does not. That difference could be resolved in conference, and there are other methods the agency could use, like carryover funds.

Nevada’s congressional delegation, like its state leadership, have fought the project hard, filing amendments and legislation at every turn (E&E Daily, July 20).

The fate of the money is also uncertain. But it seems likely that one way or another, Yucca Mountain, already a decadeslong spectacle, could create more fireworks soon.