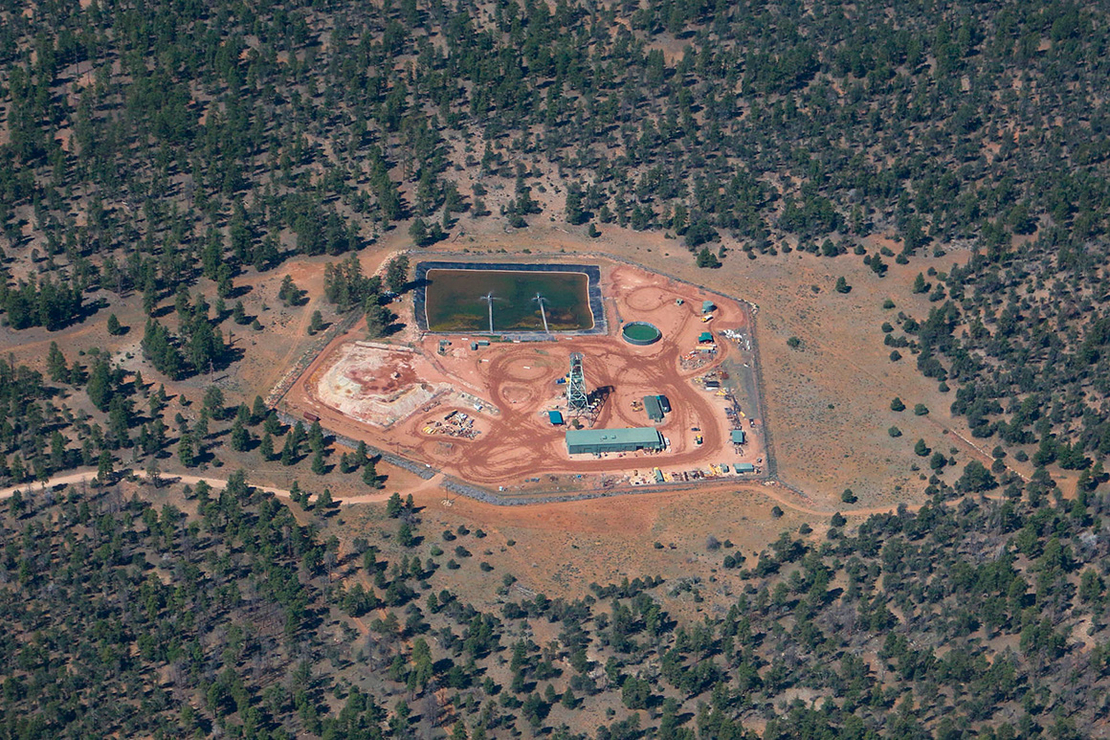 The Pinyon Plain mine — previously called the Canyon mine — near Tusayan, Ariz. It has never operated. Scott Buffon/Arizona Daily Sun/AP Photo

Uranium mining in the United States could be on the verge of a revival.

Think of it as one component of this country’s supply chain problems. As the U.S. seeks to decarbonize in response to climate change, the Biden administration has been confronted with the fact that the technologies needed to build a low-carbon economy in many cases require metals — like nickel, lithium and cobalt — that are in short supply domestically and controlled by adversarial nations, like China and Russia.

A similar situation is currently playing out with uranium, a radioactive metal key to making fuel for nuclear reactors. The U.S. dependence on foreign sources leaves the nuclear energy sector vulnerable to geopolitical conflict — like Russia’s war against Ukraine.

Russia supplies 20 percent of the low-enriched uranium used to power U.S. reactors and is the lead supplier of fuel-ready uranium to the world market. While the U.S. does import a lot of its uranium supply from other nations, like Canada and Australia, its partial reliance on Russian supplies can already be seen with spiking fuel costs.

When the Biden administration floated sanctions on Russia’s state-owned atomic company, Rosatom State Nuclear Energy Corp., the price of uranium shot to roughly $60 — a high not reached in more than a decade. Experts recently told E&E News that if sanctions are imposed on Russian imports, that move could further raise the cost of low-enriched uranium for nuclear power plants globally, leaving U.S. utilities vulnerable to more wild fluctuations.

“They’re using it [uranium] as a geopolitical weapon against the United States of America, and we have the ability to be more self-sufficient,” said Mark Chalmers, president and CEO of the largest U.S. uranium mining company, Energy Fuels Resources Corp.

Now, U.S. uranium miners say they see an opportunity to make some money helping the nation fight back against Russia. That would mean restarting idle mines, rebooting an industry in the U.S. that dramatically shrank in recent years when uranium prices were low.

It’s unclear how many uranium mines in the United States are currently in operation. The World Nuclear Association estimated that only one U.S. mine, Nichols Ranch in Wyoming, produced uranium in 2020, the most recent year analyzed by the industry group.

Exactly how long it would take to ramp up uranium production is also unclear, as are the state and federal regulatory hurdles. When asked if mines eager to restart would need approval and which entity would lead that work on conventional uranium mines, a host of agencies including the Interior Department and EPA didn’t immediately respond.

An industry source, who spoke on condition of anonymity, pointed to a number of fully licensed and permitted mines in states like Wyoming and Utah that could quickly ramp up without regulatory approval should prices rise under sanctions, but added that any operations coming online would want to lock in contracts to guarantee a rate of return. Exactly how much business American operations net could hinge on the global price and competition with countries like Canada.

“I think it may be a revival of Western supply,” said the source. “I think there’s going to be a renewed interest in bringing it closer to home, maybe closer to a stable environment.”

The U.S. is home to only one conventional uranium mill: White Mesa in Utah, which is owned by Energy Fuels Resources.

In 2019, U.S. production of milled uranium — also known as “yellowcake” — fell to a historic low of 174,000 pounds from more than 1 million pounds the prior year. Since then, the U.S. Energy Information Administration has not reported annual uranium concentrate production totals, as totals dropped so low the agency had to “avoid disclosure of individual company data.”

Energy Fuels has kept White Mesa churning by updating the plant to produce uranium concentrate from what it calls “alternate feed materials,” which include radioactive waste.

Chalmers this week said Energy Fuels is currently taking a look at the mines that could be started up. He said if prices stay the same or rise, the company would bring some operations back online.

One of the assets under consideration for starting up is the Pinyon Plain mine, a controversial uranium open-pit project in Arizona located close to the Grand Canyon. Formerly called the Canyon mine, environmentalists have long opposed the project, citing fears it would irreparably harm drinking water sources for Indigenous communities living nearby.

The Obama administration put a moratorium on new mining claims near the Grand Canyon, but Pinyon Plain was grandfathered in — although it has never operated. Chalmers said Pinyon Plain is in a position to start production if the company chooses, citing a recent appeals court decision that ruled against environmental and Indigenous groups trying to block the mine from opening. The Arizona Department of Environmental Quality in an email said existing environmental permits are in place to allow the mine to operate, but the facility has yet to initiate activity (Greenwire, Feb. 23)

A number of U.S. uranium miners are preparing projects for restart and advancing through permitting processes in response to the higher prices, said Scott Melbye, who heads the trade group Uranium Producers of America.

Melbye said his own mining firm, Uranium Energy Corp., “accelerated” toward production by doubling its drilling rig count at the site of a proposed expansion of its Burke Hollow uranium mine in Texas, which is fully permitted but not currently in operation.

UEC also owns mines it could easily restart that were recently acquired from Uranium One, a Rosatom subsidiary best known for being embroiled in a GOP political attack during the 2016 presidential campaign.

The mines formerly owned by Uranium One have a short restart time, Melbye said.

While some of these uranium market shifts were happening before Russia invaded Ukraine, Melbye said, his company and others “want to be ready.”

“The industry’s focus is, now, it’s a foregone conclusion that Russian supplies going into the U.S. won’t be happening going forward,” he said.

Over the last decade, the U.S. uranium mining industry was driven to near extinction by low prices driven by the reaction in some countries to the 2011 Fukushima Daiichi nuclear disaster in Japan. That crisis led some governments to stall nuclear plant projects, subsequently creating a glut of uranium that floated unconsumed in the global marketplace.

But those market dynamics have radically shifted.

The spread of Covid-19 forced uranium miners in Canada and Kazakhstan to shutter some of their production for months at a time. This had the unintended consequence of nuclear reactors using up some of the supply glut, resulting in projections of future supply deficits for the industry.

In addition, an investment vehicle called the Sprott Physical Uranium Trust launched last year and began hoovering up millions of pounds of uranium left in the market without a destination. The trust is designed to indefinitely hold onto the uranium it buys.

As of Wednesday, the trust held roughly 51.9 million pounds of uranium worth $2.9 billion dollars.

Ed Lyman, director of nuclear power safety at the Union of Concerned Scientists, noted spot prices are fluctuating rapidly, yet it’s not clear how “elastic” the market is given the presence of speculators. He agreed sanctions on Russian uranium could send a long-lasting signal to the market and further boost prices, making it more economical for U.S. uranium mines to become active again.

Kathryn Huff, a senior adviser to Energy Secretary Jennifer Granholm, acknowledged the need for a “Western alternative to the Russian component of the uranium market” during a hearing yesterday in the Senate Energy and Natural Resources Committee.

“The Russian invasion of Ukraine puts into stark contrast the importance of our energy security,” Huff said. She called for “sufficient support from appropriations.”

More “direction” from the Energy Department would help find a solution to “the current fleet’s needs for uranium,” Huff said.

However, like with other commodities, a U.S. uranium resurgence could carry negative consequences.

More than 500 abandoned uranium mines continue to release toxic pollution and are being cleaned up by EPA. In addition, uranium mining has a long legacy of pollution in Indigenous communities across the Western part of the U.S. that continues to this day.

In 2019, a federal health official told congressional lawmakers an ongoing study by the University of New Mexico of Navajo women and babies found roughly a quarter of those who participated suffered from high levels of uranium and radioactivity within their bodies.

Radioactive particles can have devastating effects on the human body, increasing the likelihood of a person developing lung and bone cancer, poor kidney function and other health issues.

So opposed are Navajo communities to uranium mining that they petitioned the Inter-American Commission on Human Rights seeking a finding that the U.S. violated Indigenous peoples human rights by allowing mining on and near their lands. The petition was determined admissible late last year, and the case is still ongoing.

That’s why while some Democrats and environmental groups concede there may need to be new mining of some minerals for clean energy purposes, advocates are far more wary about expanding mining of uranium (Greenwire, March 10).

“I think uranium mining is going to be a much larger threat than people realize,” said Raquel Dominguez, a policy associate at Earthworks, an environmental group.

With uranium prices going up, the “threat is very real that uranium operations will have further impacts on Indigenous communities,” said Amber Reimondo, energy director at environmental non-profit Grand Canyon Trust, which has campaigned against the Pinyon Plain mine.

Uranium miners pledge they learned their lessons from the days when their projects contaminated the lives and futures of Native American people. They say technology has improved so much that it can ensure such a tragedy is not repeated.