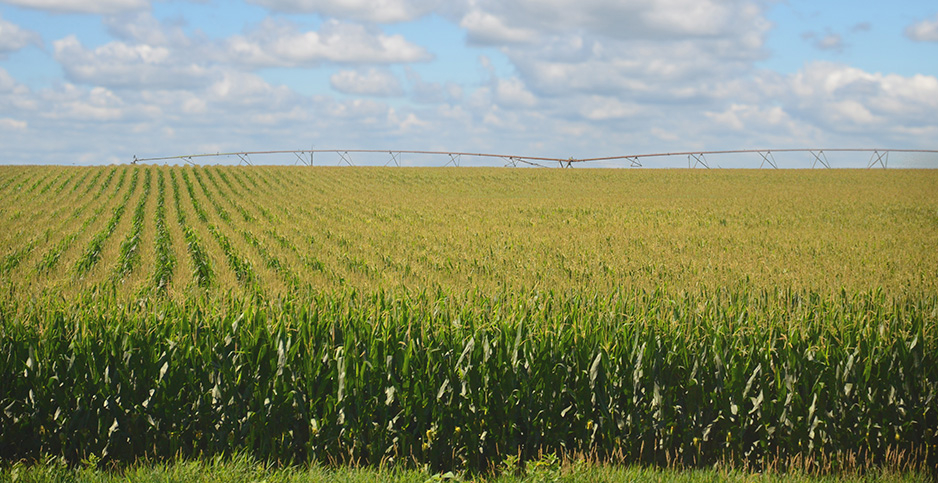 A Nebraska corn field. Republican Gov. Pete Ricketts has emerged as a strong opponent of the Biden administration's conservation push, saying he is concerned about it hurting agriculture and rural communities. Richard Hurd/Flickr

As Margaret Byfield stood onstage in Lewiston, Mont., this spring — beneath a slide warning of the "30×30 Land Grab" — she quoted Thomas Jefferson; James Madison; and then her late father, Sagebrush Rebellion II icon E. Wayne Hage.

"He said, ‘Either you have the right to own property, or you are property.’ And if you think about it, you can’t be one or the other," Byfield, the executive director of the nonprofit group American Stewards of Liberty, said about Hage. "And that, unfortunately, is where we’re headed with 30 by 30."

Byfield’s organization is leading the push against the Biden administration’s conservation pledge — a plan the Interior Department rebranded earlier this year as the "America the Beautiful" agenda (Greenwire, May 6).

The Biden proposal, which some environmental advocates have pushed for years under the "30 by 30" moniker, calls for conserving 30% of the nation’s lands and waters by 2030, in a parallel attempt to protect biodiversity and address climate change. Administration officials have been very careful in how they describe the initiative, even floating that working ranchlands could be included — a possibility that has set off alarm bells among some environmentalists who consider the proposal too watered down (Greenwire, June 2).

But Byfield and her collaborators, including radio host and Nebraska farmer Trent Loos, see the pledge as something more sinister: the latest in a long series of efforts by liberal activists and Democratic politicians to seize private lands.

"Will private land be targeted? Absolutely," Byfield told the audience in Montana. "You guys are not looking for a seat at the table because you are on the menu: You are the main course."

In response, Byfield — who eschews the cowboy couture of many land rights activists in the West, opting instead for blazers and slacks — has led a personal barnstorming tour of rural counties to build resistance to the initiative.

"We’ve got to blanket the country with opposition," she explained.

That effort began with a resolution in Garfield County, Colo., in February and has grown to include measures passed in more than 70 local governments across 12 states.

"What we’re seeing is an effort to increase the restricted lands and remove the ability of local governments and states to object to federal land acquisition and throwing a lot of money at landowners to place a federal nexus on their land," Byfield told E&E News in a recent interview. "It’s very concerning from a property rights perspective."

"The people of Nebraska oppose federal overreach and want to protect our state’s land and water to continue to make them more productive," states the order, which directs state agencies to "resist and prevent the federal government’s attempt to usurp state authority as they implement the 30×30 goal."

That effort includes a series of workshops the state Department of Revenue must hold to educate county officials about conservation and preservation easements. The Nebraska Department of Agriculture will create a list of local governments that have endorsed or opposed the conservation goal.

In a recent interview, Ricketts — who has been conducting a series of "Stop 30×30" town halls across the Cornhusker State in recent months — dismissed promises from the Biden administration that the plan will emphasize locally driven conservation and voluntary efforts.

"They say they want to do it working with farmers and ranchers in a voluntary way, but we’ve had voluntary conservation programs in this country for decades," Ricketts said, pointing to the Agriculture Department’s Conservation Reserve Program.

He continued: "So either they plan to fail, or they’re not telling us everything. And my concern for a state like Nebraska, where we are 97% privately owned: How do we fit into that overall plan?"

According to the U.S. Geological Survey’s Protected Areas Database of the United States, only 12% of the nation’s lands are permanently protected in a natural state, as are about 23% of its oceans.

But those statistics include only the most protected types of lands — designated wilderness areas, wildlife refuges, Nature Conservancy preserves, National Park Service units and state parks — and do not count mixed-used sites like lands where extractive uses like logging or mining, or activities like off-highway vehicle recreation, are permitted (Greenwire, April 16).

The Interior Department must still establish a baseline for what it considers the nation’s conserved land and water — and what variations will qualify for the 30×30 goal — as well as detail how the government will calculate future additions.

In April, Ricketts signed a letter with 14 other GOP governors pressing the president for more details about the program, including what "constitutional or statutory authority" the White House planned to rely on.

The letter also criticized the Interior Department for reversing the Trump administration’s eleventh-hour revisions that would have granted veto power to state and local governments on new federal land acquisitions (Greenwire, Feb. 11).

Ricketts told E&E News he is concerned that if his state is expected to achieve a 30% conservation rate within its borders, it could be "devastating to our small towns and rural communities."

"That would mean you’d be taking 30% away from agriculture. About 92% of our land is used for agriculture," he said.

At times, Ricketts seems to borrow from the American Stewards of Liberty presentation — for example, highlighting that Vice President Kamala Harris and Interior Secretary Deb Haaland sponsored 30×30 proposals in the last Congress, as a California senator and New Mexico representative, respectively.

He also seizes on similarities between a 2019 report authored by the Center for American Progress and the final "America the Beautiful" report. Two former top aides at the liberal think tank are now working in the Biden administration: White House Council on Environmental Quality chief of staff Matt Lee-Ashley and Interior Deputy Chief of Staff for Policy Kate Kelly.

"You’ve got very powerful people who are pushing this agenda," he said.

But while Byfield warns audiences that the Biden administration is going to forcibly take private land, Ricketts focuses on the impacts of that idea rather than making it central to his argument.

He raised questions, for example, about whether the conservation program could slash the tax base of state and local governments.

"County assessors have to take into account that land is restricted. That means it’s going to likely have a lower tax base on it," he said. "That means that if you lower the tax base for some land, everybody else’s tax is going to go up to pay for what’s no longer there."

But at the same time, Ricketts warns constituents against USDA’s conservation programs, predicting that CRP agreements, for example, will include "new environmental restrictions."

He said he stresses to county commissioners that they have the authority to approve or deny conservation easement applications based on local land use plans.

"Basically, it’s a lot of trying to educate people right now over what this all means and getting people engaged, so that as it continues to evolve, we’ll be ready to push back on anything that could be harmful to Nebraska," Ricketts said.

Interior spokesman Giovanni Rocco did not directly address the anxieties outlined by Ricketts or the American Stewards of Liberty, instead arguing the program has received endorsements from a variety of government bodies.

"We are encouraged by the dozens of counties, cities, tribal governments and states that have expressed support for the America the Beautiful initiative and that are moving forward with efforts to restore and conserve the places that matter most to them," Rocco said.

The American Nature Campaign, a project of the Resources Legacy Fund in Sacramento, Calif., is likewise tracking projects that could count toward the 30% conservation goal.

On its website, the group tracks both elected officials and projects that endorse the conservation pledge.

A map of Nebraska, for example, includes Nebraska Public Power District Board Chairman Gary Thompson and Lincoln City Councilwoman Tammy Ward, both of whom signed a January letter endorsing the 30×30 pledge.

During their series of events this spring, Loos often introduced Byfield by recalling her father’s long feud with the federal government.

"We were in a regulatory battle from the beginning of owning that land," she told the Lewiston audience.

Her father, E. Wayne Hage, and then his son, Wayne Hage, would spend 27 years in litigation with the government, fighting the Forest Service and the Interior Department over grazing permits and access to water rights adjacent to their central Nevada ranch (Greenwire, Sept. 14, 2012).

The senior Hage’s fight came in the decades after the original Sagebrush Rebellion began in 1979, a protest sparked in response to the Federal Land Policy and Management Act enacted a few years prior (Greenwire, Aug. 6, 2019).

His pushback against federal land managers would inspire other ranchers to do the same, ahead of the 1994 event that marks the start of Sagebrush II.

The revival of the rebellion was kicked off by the late Nevada rancher Dick Carver’s "reopening" via bulldozer of a road closed by the Forest Service (Greenwire, April 23, 2018).

Asked about her family’s influence on her work, Byfield talked at length about the legal battle, often straying into minutiae like specifics of ditch maintenance and rights of way.

"We just came under incredible regulatory pressure from the agencies, who for whatever reason wanted to remove us from the land," she said.

The elder Hage, whose ranch abutted public lands, clashed with federal agencies over the need for grazing permits to take his cattle to water on neighboring public lands. Hage died in 2006, but the lawsuits carried on.

Despite victories in the U.S. Court of Federal Claims and a 2013 win in Nevada, where a U.S. district judge lambasted federal land managers, Hage’s estate ultimately lost when the 9th U.S. Circuit Court of Appeals reversed that ruling and the Supreme Court declined to take up the case (Greenwire, Oct. 17, 2016).

That ruling resulted in a $587,000 fine for damages caused by illegally grazing cattle on public lands, along with an order to remove any livestock (E&E News PM, Aug. 12, 2019).

"Certainly, that experience has shown me how having the federal government as your business partner in your agriculture operations is not productive," said Byfield, who lives in Texas. "From my experience in the West and my experience living in a private property state now, it’s very clear that your small landowner is the best manager of the land."

Byfield later added: "Our perspective is, if you really, truly were interested in conserving America’s lands, you would leave landowners alone, remove the restrictions and allow them to take care of the land in the manner that they know they should be taking care of it and not according to a bureaucratic policy."