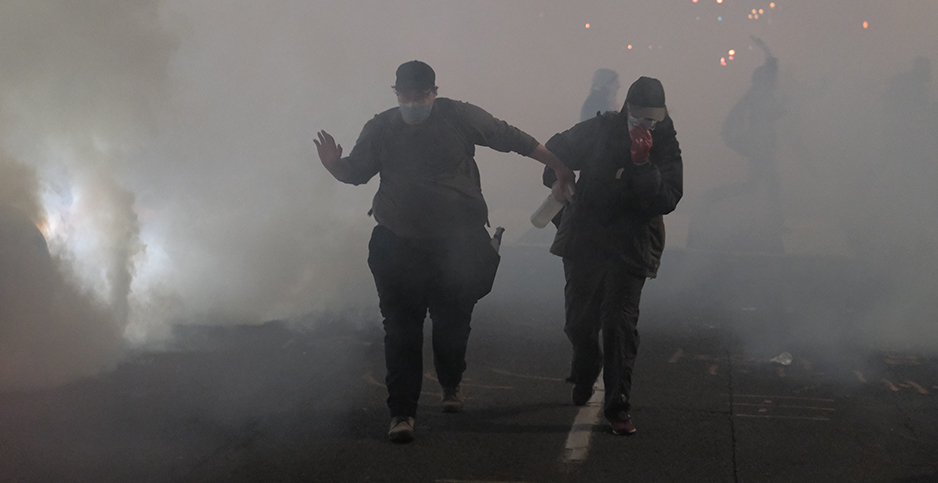 From Washington to Los Angeles, the scene has become eerily mundane in the last week: The soft thud of a tear gas canister landing on pavement, followed by a billow of white smoke enveloping a throng of fleeing demonstrators.

On a scale not seen in decades, police across the United States have resorted to tear gas and other "riot control agents" to break up protests stemming from the death of George Floyd while in the custody of Minneapolis police.

But if the immediate effects of a tear gas blast — such as choking, watering eyes and nausea — are well-known, the broader impact for thousands of people may be much harder to gauge, particularly in the midst of the COVID-19 pandemic.

Because tear gas damages respiratory airway linings, even healthy protesters who inhale it "are more prone to get the infection" caused by the viral disease, with African-Americans and other minorities especially vulnerable, Satya Achanta, an assistant professor of anesthesiology at Duke University, said in an interview this morning. Four years ago, Achanta was co-author of a scientific overview of tear gas’s effects.

"Many believe the risks of tear gas exposure are understated and that perceived risks are based on insufficient human epidemiological and mechanistic data," the authors concluded at the time.

Those gaps remain today, Achanta said. While the Centers for Disease Control and Prevention, for example, says in an online fact sheet that "long-term health effects are unlikely to occur" once exposure ends and the immediate symptoms go away, the evidence is inconclusive, he said.

Tear gas is an umbrella term for a variety of compounds, with two of the most common known in shorthand as CS and CN after their chemical makeups, according to the fact sheet.

Despite the name, those compounds are solids; they work by irritating skin or other tissue.

CDC describes their effects as poisonous. While the immediate impact should quickly wear off once a victim is out of range, long-lasting exposure or a exposure to large doses, particularly in confined settings, can lead to blindness, glaucoma or immediate death because of burns to the throat and lungs, the agency says.

Under the international Chemical Weapons Convention, to which the United States is a signatory, tear gas is deemed a riot control agent that’s banned as "a method of warfare," according to the fact-checking organization PolitiFact.

But if its use in military conflict is thus prohibited, the United States has no specific rules for its deployment by law enforcement or training requirements for its use against civilians, an online petition charges.

The petition, posted on the website Change.org, had drawn almost 37,000 signatures as of this morning. It calls for banning or limiting the use of such compounds.

Studies suggest that children are more vulnerable to severe injuries, the petition says, with exposed infants at risk of developing pneumonitis and needing extended hospitalization.

In a sign that the issue is becoming more politically sensitive, the U.S. Park Police yesterday disputed allegations that its officers deployed tear gas in clearing demonstrators from a square across from the White House on Monday, while acknowledging in a statement that pepper balls and smoke canisters were used (see related story).