Could the Colorado River Compact adapt to go with the flow? 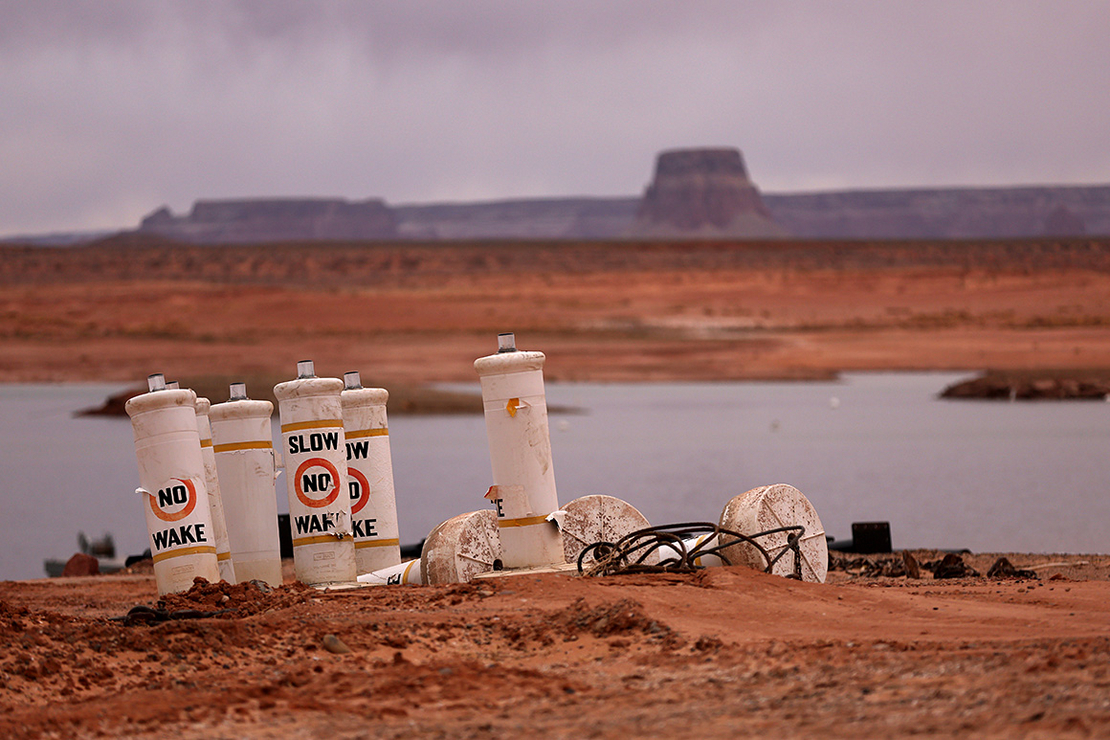 Buoys sit on the beach near the Wahweap Marina at Lake Powell on March 28 in Page, Ariz. Justin Sullivan/Getty Images

Dwindling flows in the Colorado River Basin are stirring discussions about whether a 100-year-old agreement that governs how that water is divided needs to be overhauled. But there may be another option: don’t rewrite the law, instead reinterpret it.

Despite its status as the cornerstone of the “Law of the River” — the various agreements that dictate how the water is managed between seven basin states and Mexico — some key provisions in the Colorado River Compact remain unsettled.

“There are a lot of unresolved questions and much more complexity then you frequently read in the newspaper about characterizations of the compact,” Anne Castle, a former Interior Department assistant secretary for water and science, explained in March at the University of Utah’s Wallace Stegner Center annual symposium.

Those open questions — including key provisions like how much water the Upper Basin states must ensure reach the Lower Basin states — have gained new attention during persistent drought in the West as the 1922 compact approaches its centennial anniversary.

Former Interior Secretary Bruce Babbitt recently grabbed headlines for declaring that a new compact is needed to address Western aridification, a change from his previous position that the compact should remain in place (Greenwire, May 20).

But a new compact would require a time-consuming, potentially fraught, political process, featuring interstate negotiations and then state legislative and congressional approvals.

That’s why as the Bureau of Reclamation looks to begin work on the Colorado River Basin’s post-2025 operating plan, some observers suggest now is the time to instead rethink how states interpret the compact’s existing language, and apply those new definitions going forward. Those tweaks could ensure the seven states share the burden of a smaller river equally, alleviating potentially significant cuts to water use in the upper basin states of Colorado, New Mexico, Utah and Wyoming.

The compact also mandates that the upper basin states cannot reduce flows to the lower basin states — a division marked by Lee Ferry on the Colorado River — below 75 million acre-feet every 10 years.

But while those divisions appear relatively straightforward, some experts say the reality of the compact is much more complicated.

"You would think with a 100-year-old document that we would know what it meant," Brad Udall, the senior water and climate research scientist at Colorado State University's Colorado Water Institute, recently told E&E News.

That confusion is because despite a century of interpretation — and application of other agreements addressing water distribution and drought response — observers say many key portions of the law remain undefined.

Although the state of Arizona pressed the Supreme Court for an interpretation of the compact in a 1952 lawsuit — in a case that sought to determine how much Colorado River water it had a legal right to utilize — Castle explained that the high court sidestepped issuing any such declarations when it ruled on the case in 1963.

"The Supreme Court decision that we ultimately got 11 years later in Arizona vs. California answered none of those questions," Castle said, noting the ruling also avoided issues like how to account for evaporation from reservoirs.

One of the most significant unsettled points in the compact centers on whether the document includes a "delivery obligation" for the upper basin states to ensure a consistent amount of water flows to the trio of lower basin states.

"The conventional wisdom in the 20th century by legal scholars was it was a hard and fast delivery obligation," Udall explained, and later added: "The upper basin has never agreed" with that interpretation.

Without a reimaging of that provision — one that doesn't insist on a specific delivery each decade regardless of persistent drought or diminished precipitation — water managers have expressed concern the upper basin states would bear the brunt of climate change impacts, cutting water to users in their quartet of states to ensure downstream flows remain at potentially unsustainable levels.

"The upper basin shall not cause the flow to go below 75 million acre-feet every 10 years, that's not the same as a delivery obligation," Udall said, noting that the original compact assumed that "the long-term flow of the river would stay constant."

More recent estimates put flows in the Colorado River as low as 11 million acre-feet per year, which will make current levels of usage untenable (Greenwire, April 19).

Other persistent questions over the compact's language include its direction that all of the waters it governs are to be put to "beneficial consumptive use."

Typically, "consumptive use" refers to water that is not returned to a river system, but rather used once and then done. Beneficial use is a broad term than can refer to uses in homes, businesses, recreation or other purposes.

But the University of Utah's Robert Adler, who focuses on environmental law and water law, said that the definition of "beneficial consumptive use" envisioned by the compact's authors in 1922 likely left out a host of issues that would be considered vital today, such as environmental benefits.

"You have to understand that 'beneficial use' is a term of art in water law, and it's changed some in recent years, but in 1922, it was defined as human uses promoting interstate comity … expeditious agricultural and industrial development and protection of life and property from floods," Adler said. "They're limited to some degree in who benefited, and they all involve, to some degree, money and property rights."

Spelling out the definition in the law could alleviate pressure on states to utilize all of the available water — since unused water can become the subject of lawsuits, given the 40 million users who rely on the basin — or encourage states to leave more water in the river for natural systems.

But given those open questions about definitions, Udall sees room for redefining the existing compact.

While Udall said he agrees with Babbitt's recent call for an overhaul of the compact — despite the political challenges in executing a new multistate agreement amid partisan gridlock — new interpretations of the existing compact could serve as a bridge in the meantime.

Potential amendments to the compact could include provisions dividing water via percentages, rather than specific flows, to respond to the changing river.

"In the longer term, we either need to rewrite it or reinterpret it in a way that works," Udall said.

Arizona Department of Water Resources Director Tom Buschatzke told the Arizona Capitol Times at a live forum this week that he did not anticipate water managers would "throw out the law of the river and the compact and start over again."

"What we're going to do is make changes to how we operate the system, potentially changes to how we allocate water, things like that, that effectively create amendments to the compact," Buschatzke said, pointing to the drought contingency plans executed in 2019 by the Interior Department and representatives of each of the seven states.

"We are looking for creative ways to improve on the framework," he added. "To start all over again would probably end up in a place of complete chaos. We don't have the time to deal with the chaos. We have time to make tweaks to the system."