Could the Potomac River be ‘swimmable’ by summer? 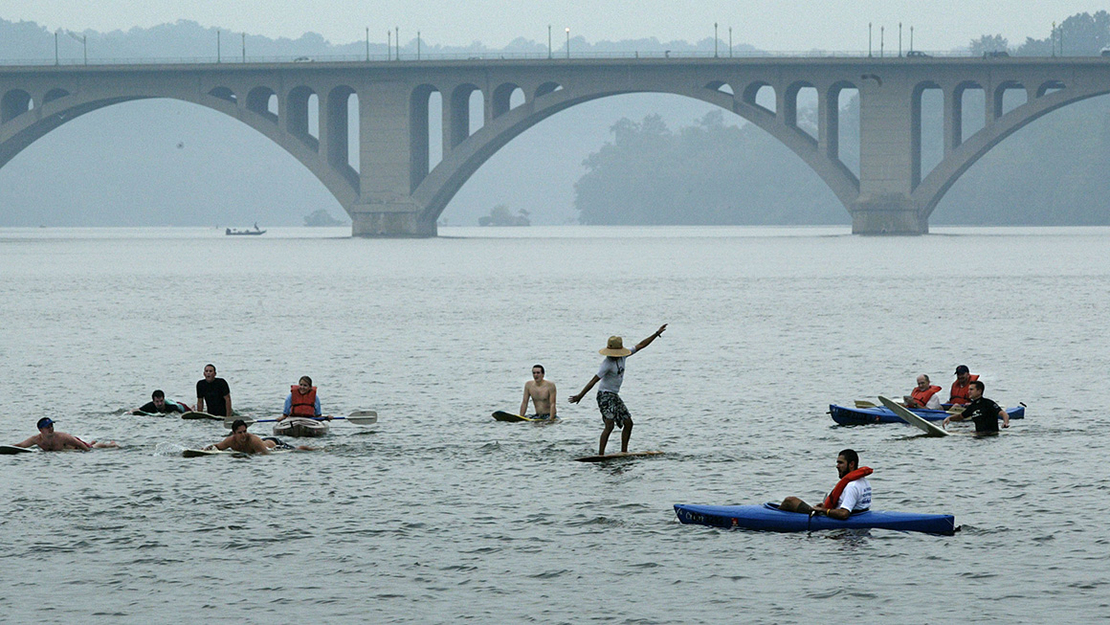 Surfers and kayakers, with the Key Bridge in the background, take on the Potomac River along the banks of Washington in 2004. The city is considering lifting a ban on swimming in the river. AP Photo/Lawrence Jackson

When advocates hoping to lift a swimming ban in the Potomac River organized a “swim-in” to show the waterway was less of a cesspool and more of a Labor Day oasis, police immediately shut it down.

Irritated, the officers argued that the river, which snakes around the nation’s capital in Washington, was a “health hazard,” wrought with strong currents and plagued with human and animal feces.

“Swimming in the Potomac in Washington is against the law,” then-Lt. Thomas M. McGlynn, commanding officer of the harbor branch of D.C. police, grumbled at the time, according to an article that ran in The Washington Post on Sept. 2, 1978.

McGlynn’s anger was aimed at the Interstate Commission on the Potomac River Basin, a watchdog of the river made up of state and federal workers who were pushing to lift the ban.

Seven years prior, Washington became the first and only city to bar residents and tourists from taking a dip in the river, the tributaries of which snake through the myriad farms and cities of the Shenandoah Valley and Blue Ridge Mountains before emptying into the Chesapeake Bay. To swim in the Potomac or Anacostia rivers within the D.C. limits could snag you a $300 fine or 10 days in jail.

Today, lawmakers and environmental groups are once again trying to reverse the ban that the city first imposed in 1971.

Democratic Del. Eleanor Holmes Norton of D.C. has filed a proposal for the Water Resources Development Act of 2022, a water infrastructure bill moving through Congress, to require the Army Corps of Engineers to study swimming in the Potomac and Anacostia rivers.

Environmental advocates who launched a campaign to lift the swim ban argue that stretches of the Potomac River that reach the steps of the nation’s capital have healed and should be open to the public ahead of the 50th anniversary of the Clean Water Act on Oct. 18.

The Potomac Riverkeeper Network says water quality data that volunteers have collected weekly over the past three years — temperature, pH, turbidity and bacteria including E. coli — show the river has improved and a swimming ban is no longer merited in certain spots. The group is calling for the ban to be lifted while keeping areas with dangerous currents off limits.

Water quality, they say, will continue to improve as D.C. tackles combined sewer overflows, which can send waste into the Potomac and Anacostia during flood events.

The group is now circulating a petition urging D.C. Mayor Muriel Bowser to take action and lift the ban.

“The fact that they’ve had a swim ban has allowed them to continuously feel like they don’t have to take aggressive action on their combined sewer problems,” said Naujoks. “A third of the city flushes its sewage into the river during heavy rain events.”

The city’s Department of Energy and Environment (DOEE) said it aims to allow swimming in D.C. waters.

“We are encouraged to see recent data indicating that the Potomac is often safe for swimming. To remove the swimming ban, DOEE is taking steps to update our regulations and water quality standards to be consistent with EPA’s most recent science and recommended standards. This, combined with developing new monitoring and analytical tools, will allow the District to alert the public when the waters are unsafe for contact recreation,” the agency said, adding, “For now, swimming events are allowed through individual permits that follow a process to determine if conditions are safe.”

The Potomac River has long been besmirched by pollution horror stories.

In the 1960s, the river reportedly smelled like an open sewer, with many small towns dumping raw sewage into the waterway, according to a historical Senate blog.

“Anyone who fell into the Potomac was advised to get a tetanus shot,” the blog reads.

In a recent op-ed, D. Randall Benn, board chair of the Potomac Riverkeeper Network, recalled how President Lyndon Johnson was told he was more likely to catch hepatitis than fish when asked where he could cast a line in the Potomac, prompting the president to later label the waterway a “national disgrace.”

That began to change on Nov. 3, 1966, when Johnson signed the Clean Waters Restoration Act, a move that was followed in proceeding years by the passage of the Clean Water Act of 1972, all of which benefited cleanup of the river and fueled restoration.

Today, the Potomac — a source of drinking water for more than 5 million people — has made an environmental comeback, but some groups are warning that progress is plateauing.

In 2020, the Potomac Conservancy gave the river a grade of B-minus, saying the waterway is on the mend but “not in the clear.”

Industrial and agricultural pollution are down, native fish are returning, and more families are flocking to enjoy the river.

And yet the river is still threatened by nitrogen, phosphorus and sediment, as well as harmful bacteria and road salt that ultimately drain into and pollute the Chesapeake Bay — runoff made worse by historic downpours that left the Anacostia and Potomac bloated, reaching historic levels.

“It’s a far cry from when we graded the river an abysmal D just ten years ago, but stalled progress could signal a dangerous reversal in course for the river’s health if threats aren’t addressed,” the Potomac Conservancy wrote in its 2020 report.

Efforts are underway to reduce combined sewer overflows and protect the river. D.C. Water is constructing green infrastructure and tunnels for Rock Creek and the Potomac as part of the court-mandated Clean Rivers Project, slated to be complete by 2030.

Naujoks agreed and said that while there’s a plethora of challenges his group is working on, the Clean Water Act has given groups like the Riverkeeper Network a legal tool to tackle the most egregious pollution.

Naujoks said volunteers testing the river weekly are finding that areas of the river — the Washington Channel, tidal basin and areas near the National Harbor — are consistently showing clean water, while areas around Rock Creek continue to struggle.

Riverkeepers are trying to push that information into the public through an app called “Swim Guide,” which Naujoks said attracted 32,000 viewers last year.

“What we’re learning is that [when] you go downriver, by Pohick Bay, we’re seeing clean water consistently,” he said.