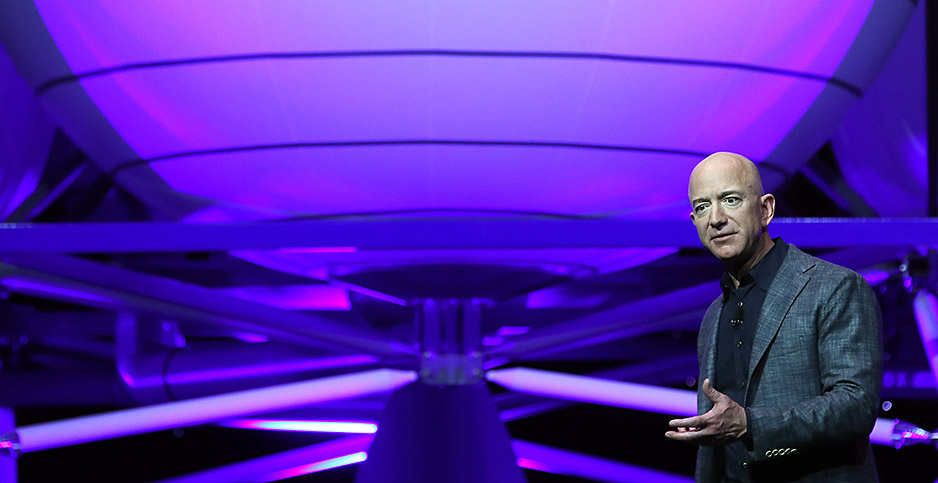 If Amazon.com Inc. founder Jeff Bezos blasts to the edge of space this month as planned, it will represent a giant leap forward for the emerging space tourism industry.

Not only would the July 20 launch from West Texas demonstrate the technical viability of Bezos’ space company, Blue Origin, but it would showcase the financial possibilities as well. An unnamed auction winner bid $28 million to ride alongside the world’s richest man, his brother and female aviation pioneer Wally Funk for an 11-minute adventure to suborbital space.

Virgin Galactic Holdings Inc., a Blue Origin competitor founded by British billionaire Richard Branson, has told investors it’s already brought in $80 million from roughly 600 reservations for seats aboard a similar suborbital service. Wall Street analysts believe those figures are likely to skyrocket if Virgin Galactic has a successful launch on Sunday — the first test flight that’s set to include Branson.

Amid all the hubbub surrounding the accelerating billionaire space race, however, is concern about the rapidly warming planet they would briefly leave behind. The emissions from a minutes-long Virgin Galactic spaceflight have been compared to a plane ride halfway around the world.

While it would take thousands of launches for the emerging industry to have a significant climate impact, some detractors say they are worried about what might happen if space tourism truly takes off. Blue Origin envisions a "future where millions of people are living and working in space," and Virgin Galactic wants to "open space for everyone."

Critics are concerned the U.S. government is doing too little to regulate the environmental impact of commercial space travel. And they have questioned the climate commitments of Bezos, Branson and SpaceX CEO Elon Musk. All three men have raised concern about global warming. And all three have taken steps to accelerate the commercial space industry.

"In the emergence of the climate crisis, it’s not a good example at all to start doing this kind of tourism activity," said Annette Toivonen, a lecturer at Finland’s Haaga-Helia University of Applied Sciences who published a book on space tourism last year.

Bezos, whose net worth is more than $200 billion, founded Blue Origin in 2000, when he was only a single-digit billionaire. The next year, Dennis Tito, an investment manager and former NASA engineer, reportedly paid $20 million for a flight with the Russian space agency to the International Space Station. SpaceX joined the commercial space race in 2002; Virgin Galactic followed two years later.

In the decades since that initial flurry of activity, only a handful of tourists have followed Tito into space. The looming journeys of Bezos and Branson would increase the figure to about a dozen.

If Blue Origin and Virgin Galactic begin regular spaceflights later this year and in 2022 as expected, the number of space travelers soon could outnumber the roughly 550 trained astronauts who’ve broken the Kármán line separating Earth’s atmosphere from the cosmos.

At the moment, the space tourism industry is worth more than $244 billion, according to UBS.

But the Swiss investment bank expects it to more than triple in size in the coming years. UBS predicts the value of the "space economy" — a grouping that includes companies that plan to fly customers to space for the experience or to slash the length of long-haul plane rides — will top $800 billion by the end of the decade.

Supporters of the nascent sector say its contribution to climate change will be minimal, in the planetary scale of things.

"I know why we focus on these things, because they are exemplary in some sense. And it isn’t to say that what they do shouldn’t be judged," said Gavin Schmidt, NASA’s top climate adviser.

"But in terms of the bigger picture, they’re not a very big part of the big picture," he said of the growing ranks of wealthy space explorers. Schmidt emphasized that he was speaking to E&E News in his personal capacity.

That’s not to say space tourism is an environmentally friendly endeavor.

Branson has estimated that a minutes-long suborbital flight on Virgin Galactic’s SpaceShipTwo has a similar carbon footprint as a commercial jet flying between London and Singapore. But international flights of that sort generally carry hundreds of passengers at a time to a fixed destination. SpaceShipTwo’s emissions are for a minutes-long roller coaster ride above the Kármán line and back.

Researchers have found rocket emissions also can damage the ozone layer, which protects people and wildlife from dangerous levels of ultraviolet radiation.

The full extent of the potential environmental harm, however, is an open question.

"With rocket emissions, we are now where the community was regarding the space debris issue in the 1970s," said Peter Martinez, the executive director of the Secure World Foundation, a nonprofit focused on the sustainable use of space. Space debris is defined as defunct human-made objects floating above Earth, such as broken satellites, abandoned rockets or fragments of earlier spaceships.

"We don’t quite know how to quantify it," he said, referring to rocket emission impacts.

NASA, however, isn’t very concerned about the likely growth in rocket emissions.

"Currently and for the near-term, foreseeable future, it’s not a global problem that NASA would necessarily concern itself with," Schmidt said of the space tourism industry.

"While it obviously isn’t particularly helpful," he added, "it isn’t going to make a difference to whether we make our Paris [Agreement] goals or not."

The Biden administration has pledged to cut the nation’s planet-warming emissions in half by the end of the decade and reach net-zero emissions by midcentury (Climatewire, April 22).

Yet the federal government also is working hard to expand the space tourism industry, which will mainly be accessible to only the world’s wealthiest people.

"NASA is interested in developing new markets beyond the traditional research and technology development market and reducing the cost and technical barriers for access to low-Earth orbit," the agency announced in 2019, during the Trump administration.

That NASA effort to bolster the private space sector, which has continued under President Biden, is intended to advance aerospace innovations that the agency hopes to use for future scientific missions back to the moon and onto Mars. That would require creating an economically — if not environmentally — sustainable space economy, the agency says.

"The FAA is eager to partner with companies that are working to launch more efficient rockets and companies that are advancing new technologies to make propulsion systems more sustainable," said an agency spokesperson, who noted that NOAA is studying the impact that launches have on the environment.

"Congress has explicitly limited the FAA’s rulemaking authority," the spokesperson added in a statement.

Lawmakers have also ordered the FAA to support the industry it is responsible for overseeing.

The most recent five-year FAA reauthorization said, "A robust network of space transportation infrastructure, including spaceports, is vital to the growth of the domestic space industry and America’s competitiveness and access to space."

The 2018 law also called on the agency to "seek to promote the growth, resilience, and capabilities of this space transportation infrastructure through policies and through partnerships with State and local governments."

If policymakers took the potential emissions threat more seriously, it could harm the bottom lines of the pioneering space tourism companies.

For instance, Virgin Galactic told investors it "may incur substantial costs" due to environmental regulations "including those relating to emissions to the air," the publicly traded business said in a May financial filing.

At this point, Virgin Galactic seems confident it could continue to avoid new emissions standards.

"We do not believe, however, that pending environmental regulatory developments in this area will have a material effect on our capital expenditures or otherwise materially adversely affect its operations, operating costs, or competitive position," it said in the filing.

As private companies, Blue Origin and SpaceX aren’t legally required to disclose risks that could sink their businesses.

Critics of space tourism say it’s contradictory for the industry’s billionaire backers to talk about the need to address climate change while also pouring their fortunes into heavily polluting ventures.

As Amazon’s CEO, Bezos launched an effort to slash the company’s emissions to net zero by 2040. Musk and Branson have both promised to bankroll efforts to spur research into carbon dioxide removal technologies. Branson abandoned his $25 million Virgin Earth Challenge after 12 years, when no companies managed to win the prize.

"What I find difficult is, they do not understand themselves how split their behavior is, between on the one hand doing something good, but the other hand is taking it away at the same time," said Paul Peeters, a professor of sustainable tourism and transport at the Breda University of Applied Sciences in the Netherlands. "This is, for the environment at least, pretty risky business."

Space tourism also poses significant questions about environmental justice, with some of the world’s wealthiest people set to enjoy the experience of weightlessness, leaving the rest of humanity to grapple with the pollution produced by their space adventures.

"Are there equity issues in all of this? Of course there are," said Schmidt, the NASA climate adviser. But he added, "That’s a legislative or administrative thing [to resolve]."