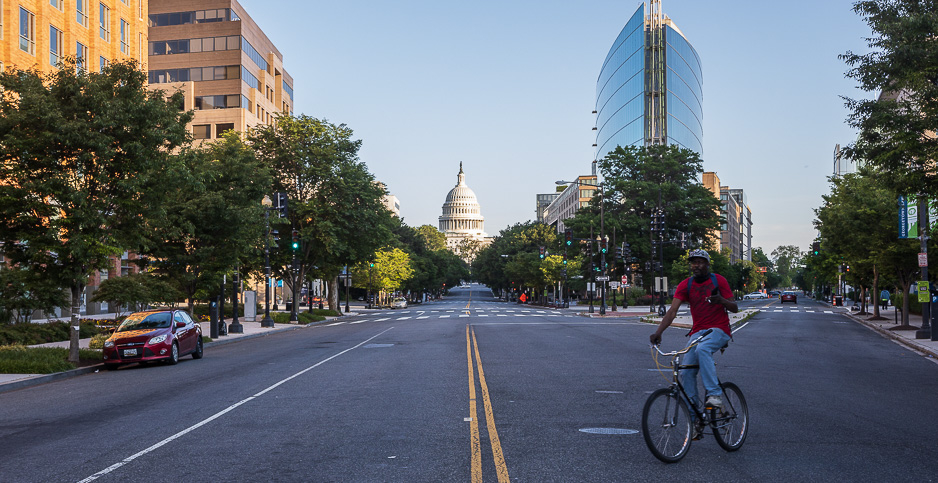 Empty streets are seen in Washington in May 2020. Global temperatures increased during the pandemic despite the lull in emissions-related driving. Francis Chung/E&E News

The sprawling economic consequences of the pandemic "slightly warmed the planet" for several months last year, according to research released this week.

The warming blip started in March as the wildly spreading coronavirus shut down industries and subdued transportation around the world. Such diminishing activity leads to less planet-warming emissions.

While levels of CO2 and other gaseous pollutants were falling, so were emissions of aerosols that contain particles of sulfates, nitrates, black carbon and dust.

When economies are roaring along, aerosols, led by soot and sulfate ions, tend to brighten clouds. That helps them reflect the sun’s heat back into space.

So with the absence of aerosols more sunlight fell on Earth. That made the planet slightly warmer, especially near industrial countries like the U.S. and Russia.

Researchers who conducted the study from the U.S. National Center for Atmospheric Research, or NCAR, admitted that the result might seem "counterintuitive." And they noted that greenhouse gases will continue to warm the Earth, despite the temporary decline in carbon dioxide during the pandemic.

But for a few months in 2020 the absence of aerosols took over the job of global warming.

"There was a big decline in emissions from the most polluting industries, and that had immediate, short-term effects on temperatures," explained NCAR scientist Andrew Gettelman, the study’s lead author.

"Pollution cools the planet, so it makes sense that pollution reductions would warm the planet," Gettelman said.

The study, which appeared in the journal Geophysical Research Letters, showed that average temperatures over parts of the Earth’s land surface were about 0.2 to 0.5 degree Fahrenheit warmer than would have been expected.

The added warmth was higher in regions normally associated with substantial emissions of aerosols, where it increased about 0.7 degree.

Gettelman said the study might tempt some people to reach the conclusion that emitting more pollution into the atmosphere might help cool the planet.

"Aerosol emissions have major health ramifications," he pointed out.