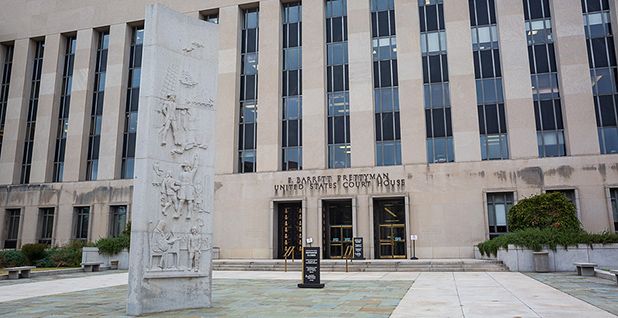 A high-profile legal dispute over the federal government’s process for considering landowner challenges to energy projects is coming to a head today in a historic remote hearing before a prominent appeals court.

The full slate of active U.S. Court of Appeals for the District of Columbia Circuit judges could choose to overturn long-standing precedent allowing the Federal Energy Regulatory Commission to use "tolling orders" that effectively block property owners from going to court while greenlighting construction of projects — like the Atlantic Sunrise natural gas pipeline — on their land.

"Issuing a tolling order is not an option that Congress provided," said Sierra Club attorney Elly Benson, who spearheaded environmental groups’ opposition to the FERC process.

"It’s one FERC made up and has been using in virtually every gas pipeline proceeding," Benson said.

Landowners and green groups say FERC violated the Natural Gas Act when it used a tolling order that barred them from suing the agency while Transcontinental Gas Pipe Line Co. LLC, or Transco, built its now-complete pipeline through Pennsylvania.

Developers of the project both expanded existing facilities and built new infrastructure to transport 1.7 billion cubic feet of natural gas per day from the Keystone State to Alabama.

Environmental groups and landowners today will ask the court to enforce a congressionally mandated deadline that gives FERC 30 days after a rehearing request is filed to either approve or deny a project. FERC has bypassed this requirement by consistently issuing tolling orders allowing indefinite consideration of pleas for rehearing.

The constitutional argument is "a little more complex" because judges generally seek to steer clear of those questions when possible, said Earthjustice attorney Aaron Stemplewicz, who wrote a friend of the court brief in support of challengers in the case.

"If the judges want to avoid that complexity," he said, "I think they have the out of ruling on the straight statutory language."

‘A big, big deal’ for landowners

Landowners face a number of risks in the pipeline approval process.

Property owners who use their land to support their livelihoods face the threat of losing control over both their homes and their income for years as litigation drags through the courts, said Niskanen Center Chief Counsel David Bookbinder, who also wrote a friend of the court brief in the case.

"For landowners, it’s a big, big deal, because FERC issues tolling orders for every pipeline," he said. "And it’s a source of frustration and outrage among landowners."

Bookbinder said the narrowest ruling the D.C. Circuit could reach in landowners’ favor would be to decide that the Natural Gas Act does not allow the agency to issue tolling orders in cases involving takings of private property.

Such a decision would put legal force behind FERC’s recently stated commitment to review landowner complaints within the 30-day window. The agency’s promise came in response to the current litigation (Energywire, Feb. 11).

A broader ruling could bar FERC from using tolling orders on cases involving any imminent injury, which could also include environmental harm, Bookbinder said.

If FERC is forced to stick to a 30-day timeline for issuing rehearing denials, that would give landowners and environmental groups a better chance of preventing harm to property and the environment.

In the case the D.C. Circuit will hear today, FERC waited nearly a year to deny the challengers’ request for rehearing.

The landowners and environmental groups launched their D.C. Circuit battle 30 days after filing with FERC, arguing that the agency had effectively denied their request.

FERC and natural gas firms that have intervened in the lawsuit said the D.C. Circuit challenge was "incurably premature" because federal regulators had not yet denied their rehearing request.

"Both the environmental groups and the landowners are in a situation where FERC is saying our decision is not final, so you can’t go to court yet," said Benson of the Sierra Club, "[but] we’re going to let the pipeline company go ahead and take your land and dig trenches and dig across rivers and cause all this environmental damage, because it is apparently final enough for those purposes."

Throughout the D.C. Circuit litigation, FERC has said that it is not required to address the merits of a rehearing request within 30 days. Instead, the agency argued, it is merely required to give notice within that time frame that it plans to take more time to consider the rehearing request.

The agency also pushed back on the challengers’ argument that the Natural Gas Act deems a request denied if the agency does not respond within 30 days.

FERC held that tolling orders did not "resolve the rehearing requests but simply extend the time to consider them."

As the dispute worked its way through the D.C. Circuit, a federal district court authorized Transco to seize landowners’ property, and FERC refused a request to stay its certificate authorizing the pipeline project.

"By the time Homeowners argued their rehearing request before this Court, the Atlantic Sunrise Pipeline was in the ground beside their homes and fully operational," the challengers wrote in a January brief.

Benson noted that while the D.C. Circuit’s precedent supporting tolling orders dates back to 1969, the court’s focus has mostly been on rates and fees, rather than harms presented by pipeline projects moving forward ahead of judicial review.

"If the Commission changes its mind on rehearing, after the tolling period, or the court overturns the decision … the party that unjustly paid too much gets a refund," Benson said.

"Obviously that is totally different from when you have a pipeline in the ground."

Due to the coronavirus pandemic, today’s arguments will take place via telephone.

Attorneys are bracing for a long hearing and the potential for technological snafus. The judges are expected to ask questions in quick succession, in a format more closely resembling a hearing before lawmakers on Capitol Hill than the typical back-and-forth from the bench.

"I feel bad for the arguing attorneys," said Stemplewicz of Earthjustice. "I’m glad I’m not doing it, because it is going to be exhausting."

He suggested that the structure of the hearing may help to mitigate against some of the challenges of arguing a telephone hearing before all of the court’s active judges.

"I’m really excited that this issue is finally getting put front and center in front of judges," Stemplewicz said. "I think when you look at it as an outsider without looking at all the legalese, there is a clear injustice going on that needs to be righted, and this is a clear opportunity for that to happen."

White and Williams LLP partner Siobhan Cole will argue the case on behalf of landowners and environmental groups.

FERC attorney Robert Kennedy will represent the agency, and Saul, Ewing Arnstein & Lehr LLP partner John Stoviak will argue for Transco, which is an intervenor in the case.

The telehearing begins at 9:30 a.m. Live audio of the arguments will be available to the public.