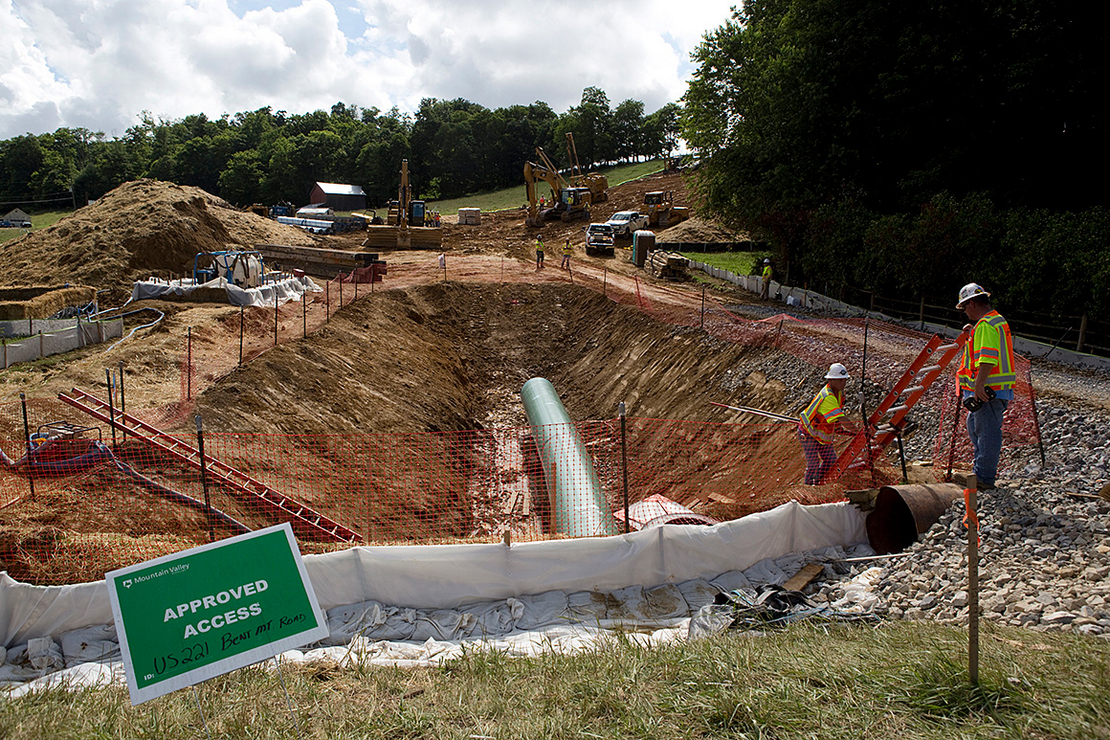 Construction crews bore beneath U.S. 221 in Roanoke County, Va., in 2018 to make a tunnel through which the Mountain Valley pipeline could pass under the highway. Heather Rousseau/The Roanoke Times via AP, File

The Mountain Valley pipeline yesterday hit a significant setback after a federal appeals court tossed out key approvals for the natural gas project.

In an unanimous decision, a three-judge panel of the 4th U.S. Circuit Court of Appeals said the Forest Service and Bureau of Land Management reviews of the pipeline’s impacts had again failed to comply with the National Environmental Policy Act.

The court then tossed out the agencies’ analyses that would have allowed the unfinished, 304-mile natural gas pipeline to cross through a roughly 3.5-mile section of the Jefferson National Forest (Energywire, Jan. 20, 2021).

“The Forest Service and the [Bureau of Land Management] erroneously failed to account for real-world data suggesting increased sedimentation along the Pipeline route,” wrote Judge Stephanie Thacker, an Obama appointee, in the panel’s decision.

The ruling calls into question the fate of the nearly fully constructed pipeline, which has been met with multiple legal challenges and has faced yearslong construction delays.

The project, approved by the Federal Energy Regulatory Commission in 2017, is designed to carry natural gas from West Virginia to Virginia and had sought to be in service by this summer.

Project developers yesterday didn’t comment on whether the 4th Circuit’s decision could lead to increased costs for the pipeline or cause additional delays.

“We are thoroughly reviewing the Court’s decision regarding MVP’s crossing permit for the Jefferson National Forest and will be expeditiously evaluating the project’s next steps and timing considerations,” said Natalie Cox, a spokesperson for Mountain Valley Pipeline LLC, in an emailed statement.

But energy analysts predicted the project could face significant delays after the court ruling.

“A summer 2022 in-service date is unrealistic,” said Rob Rains, a senior energy analyst at the firm Washington Analysis LLC. “We suspect that many folks watching this project are even looking beyond 2022 now for the project to be completed.”

Suzanne Mattei, an energy policy analyst with the Institute for Energy Economics and Financial Analysis, said the ruling could bump the project’s in-service date into 2023, as the Forest Service and BLM “have to respond to what the court is requiring, and when they do, there has to be … additional opportunity for public comment.”

Environmental groups, led by Wild Virginia, had returned to the 4th Circuit to challenge the reissued Forest Service and BLM records of decision and rights of way for the project.

The groups argued that the agencies’ revisions finalized in the last days of the Trump administration still did not correct the errors that had initially prompted the 4th Circuit to remand the analyses in 2018.

The 4th Circuit had previously ordered the Forest Service to analyze sedimentation impacts and apply its 2012 planning rule, which includes requirements for protecting and restoring soil and riparian resources.

The court had also directed BLM to make a finding about using an existing right of way for the pipeline through the national forest.

In yesterday’s decision, the 4th Circuit agreed with part of the challengers’ arguments.

The judges ruled that both the Forest Service and BLM had not done enough to consider the sedimentation and erosion impacts of the pipeline in a supplemental environmental impact statement.

The federal government had also prematurely allowed the use of a conventional bore method to cross four streams, without first considering FERC’s analysis of the approach for stream crossings outside the forest.

The Forest Service had also failed to comply with its 2012 planning rule that imposed “substantive requirements” to protect ecosystems, the court said.

A spokesperson for the Interstate Natural Gas Association of America said the trade organization was disappointed to learn of the court’s decision.

“Consumers, manufacturers and communities benefit from the reliable access to clean, domestically-produced natural gas that projects like MVP will provide,” an INGAA spokesperson said in an emailed statement. “When projects, such as MVP, are delayed, shippers and ultimately consumers will be forced to bear higher energy costs and less reliable service until sufficient energy infrastructure is constructed.”

However, the court denied the rest of the challengers’ arguments against the pipeline.

“The Forest Service and BLM have now been shown to have ignored important scientific information and bypassed their own rules for the second time, all to allow a private corporation to use and abuse the public resources they are supposed to protect and preserve for us all,” he said in a statement.

The ruling is a clear setback for the pipeline because it will require the preparation of a new draft record of decision, which will include a notice-and-comment period that could take months or even longer to complete, said Rains.

“Of course, that is a bit of an unknown, and we will need to wait for a signal from the [Forest Service] about how it intends to proceed from here,” he added.

The agencies will also have to wait on FERC to amend its certificate for Mountain Valley developers authorizing conventional boring before they can take action, said analysts at ClearView Energy Partners LLC.

The court had found that the Forest Service and BLM had acted prematurely by finalizing their analyses before FERC issued the amended certificate.

“We consider the failings to be concrete and therefore potentially addressable,” ClearView wrote in a note to clients yesterday.

“We were already expecting FERC to act on the certificate amendment within the coming months, so this issue could already be on track for resolution,” the note continued.

In addition to action from FERC, Mountain Valley developers are also waiting for the 4th Circuit to rule on a challenge to the Fish and Wildlife Service’s biological opinion for the project.

The West Virginia Department of Environmental Protection granted a water quality certification to the project last month, as did the Virginia State Water Control Board (Energywire, Jan. 3).

“We believe agency regulators in Virginia and West Virginia performed a comprehensive analysis and thorough review of Mountain Valley’s 401 permit applications, satisfied all legal requirements, and made appropriate authorizations under the law,” said Cox, the Mountain Valley spokesperson, in an email.

Developers still need to secure a federal water permit from the Army Corps of Engineers to complete construction of the pipeline.

The Army Corps doesn’t have an expected date for a final permit decision, said Brian Maka, a public affairs officer for the agency’s Huntington District, in an email.

“The Corps is continuing to evaluate the comments received in response to the Corps’ public notices” and two public hearings that were held in November, Maka said.

Meanwhile, environmental groups are upping the pressure on the Army Corps to reject the Clean Water Act permit for Mountain Valley, with the Sierra Club promoting a call-in campaign to Michael Connor, assistant secretary of the Army for Civil Works.

Cox said Mountain Valley “respects and acknowledges the role of the public comments as an integral part of the regulatory process,” but she pushed back on environmental groups’ opposition strategy.

“We believe that the nature and tactics employed by pipeline opponents reflect their myopic focus on their own policy agenda and objectives, rather than the actual technical and legal aspects of MVP’s permits,” said Cox in an email when asked about the Sierra Club campaign. “Mountain Valley’s top priorities have been and remain the safety of its employees, contractors, and communities; and the protection of environmental, cultural, and historic resources.”