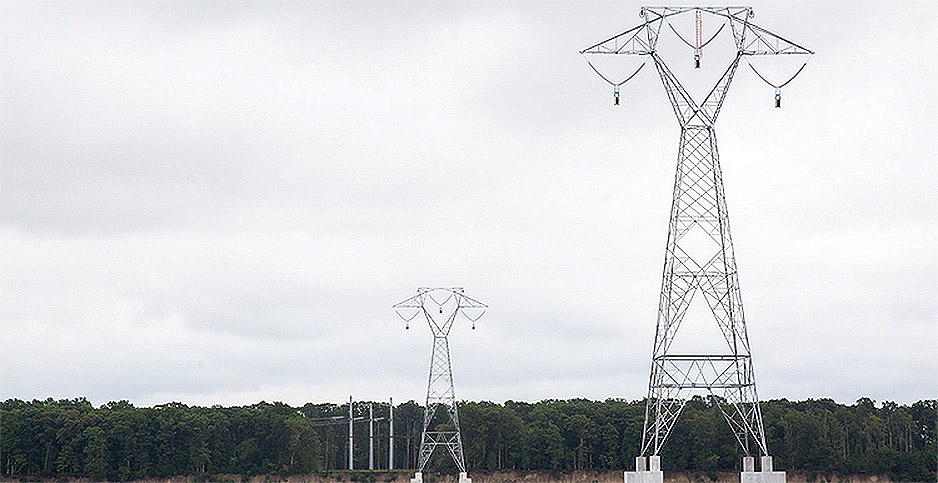 A federal appeals court today rejected the Army Corps of Engineers’ approval of a 17-mile transmission line across the James River, determining the corps did not properly analyze the full impacts of the power line that critics say degrades the site of the first permanent English settlement at Jamestown, Va.

The 26-page opinion issued by the U.S. Court of Appeals for the District of Columbia Circuit directs the corps to go back and conduct a full environmental impact statement, which could take years to complete.

In doing so, the appeals court has placed the fate of the project in doubt. Dominion Virginia Power has already built the 17 high-tower transmission lines, some nearly as tall as the Statue of Liberty, and it placed the line in operation this week.

"We’ll push for the removal of those towers because the permit should never have been granted," said Sharee Williamson, associate general counsel for the National Trust for Historic Preservation. "They have been built, but deconstruction is possible, and we will push for it."

Today’s decision remands the case back to the U.S. District Court for the District of Columbia to formally scrap the permits and order the EIS. It’s unclear whether the lower court will require Dominion to remove the now-unpermitted towers. In similar infrastructure cases involving National Environmental Policy Act claims, judges generally have been leery of requiring the dismantling of constructed projects.

Patrick Bloodgood, an Army Corps spokesman in Norfolk, Va., told E&E News the agency can’t say whether the transmission lines would need to be torn down.

"We don’t know," Bloodgood conceded. "We’re reviewing the findings to see what these findings really and truly entail."

Dominion Energy released a statement today saying it was "disappointed" at the ruling, which the company says "dismisses" four years of environmental analysis by the corps. The company also said that as far as it is concerned, the project "remains a valid and vital line serving the 600,000 residents who live and work on the Peninsula" in southeast Virginia stretching from Richmond to Norfolk.

"During the entirety of the construction process we worked to protect the environment in all of our operations," the statement says. "We will continue to keep reliability and environmental stewardship at the forefront as we evaluate the court’s decision and determine our course of action."

The three-judge panel rejected the corps’ conclusion that the Virginia transmission project had no major impacts and didn’t require an in-depth review under NEPA.

Today’s opinion notes that "important questions about both the Corps’s chosen methodology and the scope of the project’s impact remained unanswered, and federal and state agencies with relevant expertise harbor serious misgivings about locating a project of this magnitude in a region of such singular importance to the nation’s history."

The electric transmission route would cut across the James River near the historic English settlement of Jamestown. Judge David Tatel, a Clinton appointee, described the significance of the area in detail, recounting Capt. John Smith’s voyage into the Chesapeake Bay and up the James River.

"These journeys came to symbolize our nation’s founding and to serve as an equally important reminder of one of the darkest episodes in our history — the settlers’ devastation of Native American populations," he wrote.

The National Park Service, the Advisory Council on Historic Preservation and thousands of members of the public raised objections to the planned location of the transmission line. Several preservation and environmental groups filed suit, and the D.C. Circuit heard oral arguments in December (Greenwire, Dec. 7, 2018).

Under the Trump administration, the Interior Department walked back its concerns. Obama-era NPS Director Jonathan Jarvis last year submitted an amicus brief to the court maintaining the project would "forever … destroy the historic setting of these iconic resources."

"These are hardly the hyperbolic cries" of not-in-my-backyard neighbors, Tatel wrote. "Instead, they represent the considered responses — many solicited by the Corps itself — of highly specialized governmental agencies and organizations."

The court concluded that Dominion’s permits should be scrapped and the Army Corps should conduct a detailed environmental impact statement.

"Indeed, Congress created the EIS process to provide robust information in situations precisely like this one, where, following an environmental assessment, the scope of a project’s impacts remains both uncertain and controversial," the decision says.

Joining Tatel in the opinion were Judge Patricia Millett, an Obama appointee, and Chief Judge Merrick Garland, a Clinton appointee.

Dominion proposed the transmission project after determining it would have to shut down two coal-fired generators to comply with EPA’s 2012 Mercury and Air Toxics Standards.

Today’s opinion overturns a ruling last year by U.S. District Senior Judge Royce Lamberth, a Reagan appointee, that determined the corps complied with the mandates outlined under NEPA, the Clean Water Act and the National Historic Preservation Act when analyzing the project and its potential impacts to natural resources and the region’s historic setting (Greenwire, May 25, 2018).

Representatives of NPCA and the National Trust for Historic Preservation praised the ruling as vindication for their efforts to protect the historic setting.

NPCA, in particular, has argued that running the power line across the river would "deface" nearby historic Jamestown and surrounding national park sites like Colonial National Historical Park, Colonial Parkway and the Captain John Smith Chesapeake National Historic Trail — the first and only congressionally designated water trail.

Obama-era Interior Secretary Sally Jewell and NPS expressed serious concerns about the power line, warning it could alter the historic setting of the area where Smith and more than 100 colonists made their historic voyage to Jamestown in 1607.

Goddard said her group has little sympathy for Dominion Energy and the possibility, however remote, that the company may have to remove the power lines.

"Dominion went forward knowing they were in litigation and that a day like this was possible," she said. "They took a risk."