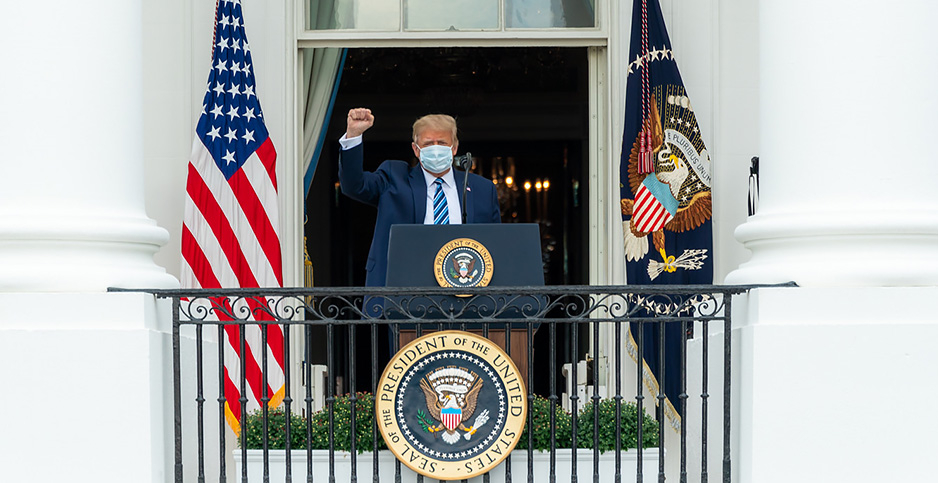 President Trump has sought to close loopholes exempting bifacial solar panels from import tariffs, but a court order may block the administration's push to do so before the next president is inaugurated. Shealah Craighead/White House/Flickr

A U.S. trade court has thwarted President Trump’s attempt to enact new solar tariffs, throwing the issue into limbo until after the election.

In a temporary restraining order over the weekend, the Court of International Trade ruled that customs officers could not enforce Trump’s Oct. 10 presidential proclamation that backed additional import fees on next-generation solar panels.

In that proclamation, Trump concluded that an exemption to tariffs for two-sided or "bifacial" solar panels had "impaired the effectiveness" of the administration’s trade agenda. Solar analysts interpreted that as an order to extend tariffs to bifacial types — something the administration has tried and failed to do for months.

Still, the court’s ruling offered little in the way of final definition as to the fate of bifacial tariffs, which some analysts say could account for a third of all panels deployed in the coming years.

Timothy Fox, an analyst at ClearView Energy Partners, wrote in a research note yesterday that the decision was a "short-term positive for U.S. solar power buildout."

He noted that the court had not explained its reasons for issuing the restraining order, making it unclear whether the Trump administration stood a good chance of prevailing.

Even if Trump loses the election, it isn’t clear that the administration would give up on bifacial tariffs during the lame-duck period, said Tara Narayanan, North American solar analyst at BloombergNEF.

"It’s quite possible that the government could enter into a tariff tennis with courts for the rest of the year," she added.

Bifacial panels, which can produce more electricity than one-sided types and for a lower lifetime cost, are prized by many solar developers for their efficiency.

The Trump administration first tried to impose tariffs on bifacial imports after a petition from solar manufacturers complained that foreign imports were undercutting the growth of U.S. production. But the trade court has repeatedly delayed the tariffs from going into effect, saying the administration did not follow federal rulemaking procedure.

Trump’s proclamation earlier this month was understood by analysts as an attempt to push through the tariffs despite objections from the court. The president had also called for raising duties on one-sided panel imports from 15% to 18%, and he granted permission for an investigation into extending those tariffs past their original four-year period (Energywire, Oct. 13). Both of those actions went uncontested by the court’s restraining order.

According to Fox, if Democratic presidential nominee Joe Biden wins the election, "limitations on bifacial imports seem unlikely to continue more than a few months."

"If, on the other hand, President Trump wins a second term, past opposition to solar imports suggests another bite at the bifacial apple," he added.

Yet some energy researchers have speculated that a Biden White House would share the Trump administration’s taste for tariffs on solar panels and other clean energy imports.

"Even with the switch to a Democratic administration, there are some concerns that these protectionist measures would continue," said Jonas Nahm, an assistant professor for energy, resources and environment at Johns Hopkins University’s School of Advanced International Studies. "If you look at Biden’s climate plan, or the Green New Deal, there’s a lot of discussion about domestic production of [clean energy] technologies."

But the speed of Biden’s energy goals, which include 100% carbon neutral power by 2035, may complicate an emphasis on domestic sourcing.

"There’s nothing inevitable" about the United States’ dependence on China for solar supplies, said Nahm, but changing that "just won’t happen in two or three years."

"We have to have a dual strategy," said Nahm, who argued against clean energy tariffs in testimony before the House’s Foreign Affairs Committee.

Allegations of forced labor in Chinese supply chains may also disrupt trade in solar technologies. The Solar Energy Industries Association has called for its members to stop buying from the region of Xinjiang, where China has allegedly carried out mass detentions (Energywire, Oct. 26).

And during a second potential Trump term, American criticism of China’s environmental record, wrote ClearView analysts, could serve as a "pretext for new tariffs."

"We would not rule out conflict under similar grounds during a Biden Administration, either," they wrote.

On Nov. 5, the judge will hold a hearing to decide how Trump’s proclamation will affect an earlier injunction against bifacial tariffs. Two days later, the restraining order will expire.