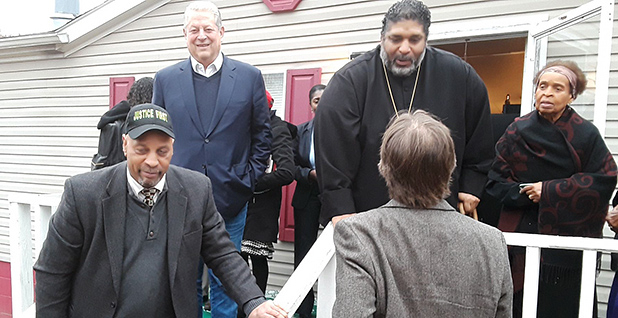 Developers of the Atlantic Coast natural gas pipeline face a new legal hurdle after a panel of judges tossed out an approval for a controversial compressor station associated with the project.

A decision yesterday by the 4th U.S. Circuit Court of Appeals to scrap the Virginia Air Pollution Control Board authorization marks the eighth Atlantic Coast permit either revoked by the courts or pulled by a federal agency, said David Neal, a senior attorney with the Southern Environmental Law Center (Greenwire, Jan. 7).

The court’s ruling is "just a sign that there is so much uncertainty with this project," said Neal, who argued against the compressor station air permit on behalf of the Friends of Buckingham and Chesapeake Bay Foundation Inc.

Buckingham County’s fight against the compressor station, which would sit in a community established by freed slaves at the end of the Civil War, has drawn attention from national figures like former Vice President Al Gore and social justice advocate the Rev. William Barber II.

Both Gore and Barber visited the Union Hill neighborhood last year to support opponents of the compressor station.

Neal said the court’s ruling reaffirms an environmental justice provision in Virginia law that requires the consideration of the character of a local population and the degree of harm the population could face from a project.

"It should really shape how the board and the [Department of Environmental Quality] assess air permits going forward," he said. "This part of environmental law has been on the books for a good while, and I think it has not been taken as seriously as it should."

Aaron Ruby, a spokesman for Atlantic Coast pipeline developer Dominion Energy Inc., said the company remains confident that the project will still be complete by 2021 — even with the vacated permit.

"We will immediately begin working with the state to resolve the procedural issues identified by the Court," Ruby wrote in an email. "We are confident the additional analysis required by the Court can be completed in a timely manner."

He said Dominion remains "totally committed" to completing the pipeline, which would carry gas 600 miles between West Virginia and North Carolina.

"This project is all about growing the economy and moving toward clean energy," Ruby said.

Yesterday’s ruling came from the 4th Circuit, a bench that has taken a critical view of several Atlantic Coast pipeline permits, including a Forest Service authorization for the project to cross beneath the Appalachian Trail.

The Supreme Court will hear oral arguments in that dispute next month.

The 4th Circuit pulled no punches in its finding yesterday that Virginia regulators had failed to conduct a full analysis of the compressor station’s impact on an environmental justice community.

"The Board rejected the idea of disproportionate impact on the basis that air quality standards were met," Judge Stephanie Thacker, an Obama appointee, wrote in the court’s opinion.

"But environmental justice is not merely a box to be checked, and the Board’s failure to consider the disproportionate impact on those closest to the Compressor Station resulted in a flawed analysis."

The three-judge panel pointed out that while the board recognized the primarily African American community as an environmental justice minority community, it did not tailor its consideration to Union Hill and instead relied on the National Ambient Air Quality Standards and state air quality standards in its analysis.

Virginia regulators relied on a "woefully inadequate" site evaluation that failed to list 60 homes within a mile of the proposed site boundary, the court found. The board failed to consider zero-emission electric turbines as an alternative to gas-fired turbines and did not seek an independent assessment of the proposed site in the Union Hill community, the 4th Circuit said.

"But these mantras do not carry the day," she continued. "What matters is whether the Board has performed its statutory duty to determine whether this facility is suitable for this site, in light of [environmental justice] and potential health risks for the people of Union Hill.