Court may back Mountain Valley pipeline, despite NEPA fight 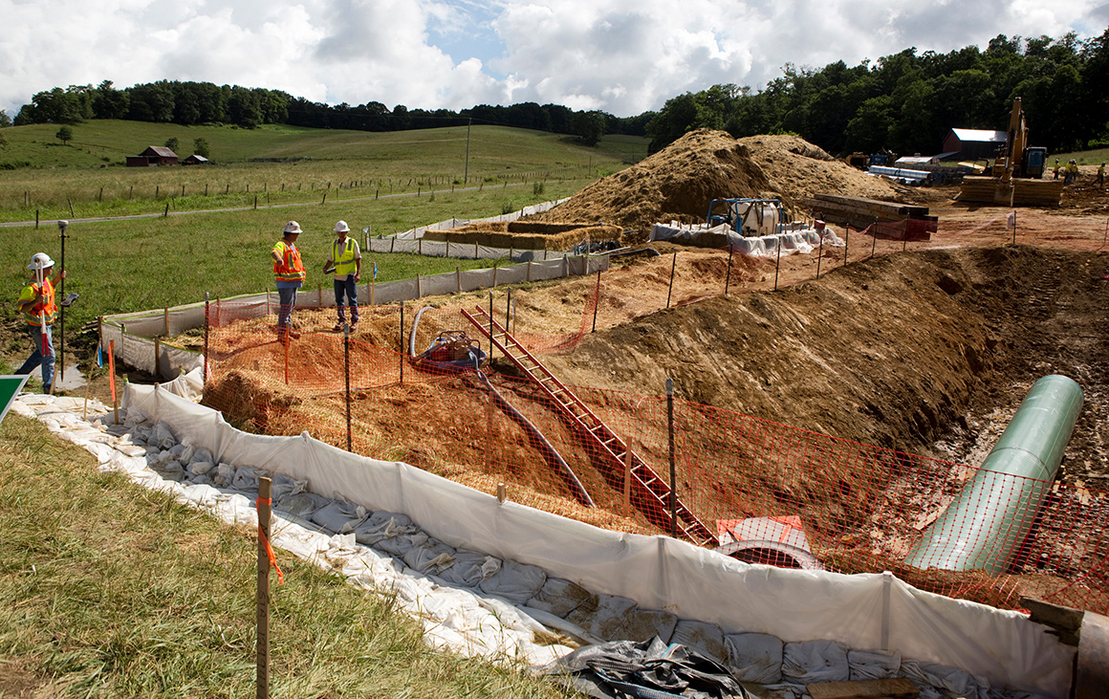 Construction of the Mountain Valley pipeline in Virginia. Federal judges this week appeared ready to approve an extension of the line into North Carolina. Heather Rousseau/The Roanoke Times via AP

During virtual arguments yesterday, a three-judge panel of the U.S. Court of Appeals for the District of Columbia Circuit appeared skeptical of green groups’ claims that energy regulators had failed to take a hard look at the environmental impact of building the Southgate extension connecting the natural gas pipeline to North Carolina.

Chief Judge Sri Srinivasan said it wasn’t enough for the groups opposing the project’s Federal Energy Regulatory Commission certificate to argue that they disagreed with the agency’s reasoning.

The lawsuit, which raises claims under the National Environmental Policy Act, is the latest in a series of legal challenges to FERC approvals of natural gas pipelines.

While the D.C. Circuit has recently struck down FERC certificates for projects like the Spire STL pipeline in Missouri and the Jordan Cove gas export terminal in Oregon, the court appeared to have few qualms about the agency’s decision to greenlight the 75-mile Southgate extension.

The project would connect the still-incomplete, 304-mile Mountain Valley pipeline in West Virginia and Virginia to consumers in North Carolina.

The Sierra Club and other environmental challengers argued that FERC had not done enough to consider the potential erosion risks to stream crossings of the Southgate extension, particularly since construction of the Mountain Valley pipeline had resulted in problems with erosion and sediment in waterways.

He added that FERC had explicitly said it would not consider Mountain Valley’s track record in constructing the mainline project, since the agency reviewed each proposal on its own merits.

Srinivasan, an Obama appointee, was the only judge on the panel to ask questions in the brief hearing. He didn’t pose any questions to FERC attorney Matthew Estes.

The government lawyer defended FERC’s decision to authorize the Southgate project, noting that the terrain covered by the extension was much less steep than the land that developers encountered during construction of the mainline pipe.

"Mountain Valley continuously upgraded and improved its mitigation [measures] where problems were identified," Estes said. "Mountain Valley had agreed to go beyond the minimum requirements imposed by state regulation."

He also rejected concerns from environmental groups that FERC had improperly accounted for the continued risk posed by heavy rainfall due to climate change.

FERC’s analysis had found that record-setting rainfall in 2018 had been a factor in creating challenging conditions for Mountain Valley construction, but Estes said that the rain was the worst in 125 years.

"It may be that we will expect more wet years in the future," he said. "Here we are talking about a relatively short construction period."

After Srinivasan asked about the status of the main Mountain Valley pipeline, project attorney Jeremy Marwell said that even with some pending legal challenges, developers were "making progress."

"We don’t think there is any basis for the court to delay its review here," said Marwell, a partner at the firm Vinson & Elkins LLP.

"While we would note that questioning by a single judge on a three-judge panel isn’t dispositive of the views of the other two," ClearView wrote, "the brevity of the oral argument and the lack of substantive probing on FERC’s position suggests to us that the Commission’s order may survive judicial review."