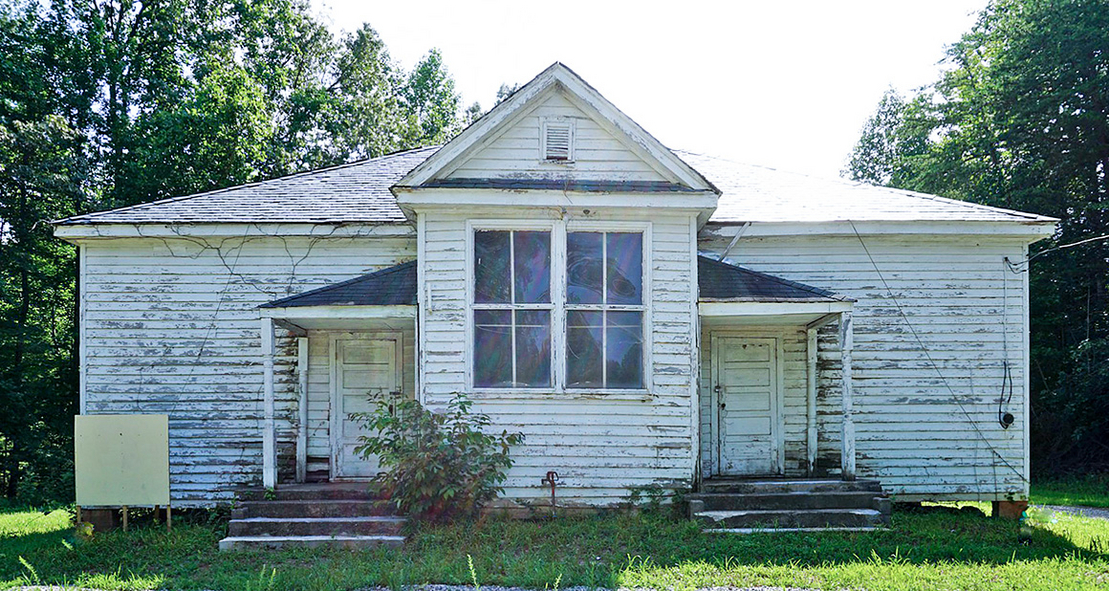 The Pine Grove Elementary School in Cumberland County, Va., served African American students until it closed in 1964. It's now threatened by a proposed landfill. Niya Bates/Virginia Department of Historic Resources

An upcoming federal appeals court battle could reset the rules for environmental reviews of major projects like power plants and highways — and determine the fate of a historic Virginia school built to educate Black children during the Jim Crow era.

As the Army Corps of Engineers weighs a permit for a “mega landfill” to be constructed within 1,000 feet of the former Pine Grove Elementary School in Cumberland County, Va., the agency’s consideration of more data on the project’s health and cultural impacts could hinge on its adherence to a 2020 Trump-era rule that overhauled — critics would say gutted — requirements for National Environmental Policy Act reviews dating back to 1978.

The Trump NEPA rule will come under scrutiny Wednesday when Wild Virginia and other environmental groups challenge the White House Council on Environmental Quality regulation before the 4th U.S. Circuit Court of Appeals.

“The changing landscape of the CEQ regulations and how the Army Corps of Engineers should or shouldn’t implement that makes it hard for the Pine Grove project to monitor what is going on,” said Cale Jaffe, a law professor at the University of Virginia.

Former Pine Grove students and their descendants are working to preserve the two-room school as a cultural center and are urging the Army Corps in public comments to conduct a more thorough analysis of the impacts of the landfill, which would accept 5,000 tons of waste per day, six days a week.

“We are adhering to the current NEPA regulations,” said Army Corps spokesperson Breeana Harris in an email. Under the Trump rules — which the Biden administration has not yet fully revised — the agency could decide to conduct an environmental assessment of the proposed landfill near the Pine Grove school, instead of a more robust and detailed environmental impact statement.

NEPA analysis is “sort of like a radar screen,” said Jaffe, who penned a “friend of the court” brief from Pine Grove school supporters backing the appeal from environmental groups to keep their challenge to the Trump NEPA rules alive.

“It shows us what’s coming in and what’s happening,” he said. “And when you eviscerate the regulations under NEPA, the radar screen goes dark.”

The question before the 4th Circuit on Wednesday is a narrow one: Do environmental groups still have standing to bring a lawsuit against the Trump NEPA rules, now that President Joe Biden’s White House is drafting new standards?

For Kym Meyer, an attorney for the Southern Environmental Law Center arguing on behalf of environmental challengers, the answer to whether her clients are still harmed by the 2020 rule is a resounding “yes.”

Despite CEQ’s assurances that it will be changing the Trump administration’s approach, the Biden administration has only completed the first of two phases of new rule-making, she said. Phase 1 did not come close to fully addressing environmentalists’ concerns, said Meyer, and a proposal for the second phase of rule-making is now months overdue.

Without even a proposed Phase 2 rule, she said, environmental groups do not know if CEQ plans to reverse the remaining changes issued under former President Donald Trump.

“Until we see a Phase 2 rule that fixes all the problems that we have with the Trump regulation, we’re going to have to keep challenging this in court,” Meyer said.

The Biden administration has argued that litigation over the Trump rule should be dismissed now that CEQ is working on completing its own revisions. The agency finished Phase 1 of rule-making in April, and the regulation went into effect in May.

The first phase of rule-making “nullifies” the environmental groups’ lawsuit over the Trump regulations, CEQ said in court filings. The agency noted that the groups can still file challenges against individual projects that are approved under the Trump rules.

If the 4th Circuit agrees with environmentalists’ claims, the case would go back to a federal district court judge who has already been fully briefed and heard oral arguments in the case. The lower court could reach a ruling on the substance of the environmental groups’ arguments fairly quickly, said Meyer.

She said their case was stronger now than when they argued it before Judge James Jones of the U.S. District Court for the Western District of Virginia in the first few weeks of the Biden administration.

“I think he could have had the expectation … that the administration was going to come in and they were going to take care of this and there wasn’t really anything for us to worry about,” Meyer said.

“But now we’re two years later, and it’s clear that that hasn’t happened,” she added. ” At least, not yet.”

Pine Grove school was built as part of the Rosenwald Schools Initiative launched in the early 20th century in a partnership between Booker T. Washington; the Tuskegee Institute; and philanthropist Julius Rosenwald, the president of Sears, Roebuck and Co.

“The idea was simply to design and help fund the construction of schools for Black schoolchildren throughout the Southeast at a time when they were barred from attending any public school due to Jim Crow oppression,” said Jaffe of the University of Virginia.

While the Rosenwald schools played a pivotal role in educating Black children across the South after the Civil War, only a fraction of the buildings remain today, according to the National Trust for Historic Preservation, which in 2021 listed Pine Grove school as one of the nation’s “11 Most Endangered Historic Places.”

In the years since the Pine Grove school’s closure in 1964, former students and their families have worked to preserve the building as a cultural center, but those efforts have been imperiled by plans to build the Green Ridge Recycling and Disposal landfill, Jaffe said.

The landfill site, which is right across Pine River from the school, would surround the building on two sides. Pine Grove Road, which leads to the school, would be destroyed and moved under the developer’s proposal, said Jaffe.

Supporters of the school want the Army Corps to collect more information about the proposed landfill after University of Virginia students found numerous health impacts from the project in an analysis they submitted to the agency.

Under the original 1978 NEPA rules, Army Corps could only decline to pursue further data if it considered the cost of collecting that information to be “exorbitant.”

But the Trump rules imposed a lower standard for excluding data, requiring agencies to show only that collecting additional information would present an “unreasonable” cost.

“Whether they have to gather [the information] or not may hinge on which regulations apply,” Jaffe said.

Other changes to the rules are also concerning for other groups that have sued to undo the Trump rules. Susan Jane Brown, a staff attorney at the Western Environmental Law Center, is involved in a separate lawsuit against the NEPA rules that is currently on hold in federal district court in Northern California.

Like supporters of the Pine Grove school, the Western Environmental Law Center has raised concerns about the Trump administration’s changes to requirements for when agencies must draft environmental impact statements.

The 2020 rule eliminated most of the 10 “significance factors” that laid out specific conditions when an agency needs to proceed with a more thorough NEPA review, said Brown.

For example, opponents of the Dakota Access oil pipeline relied on that project’s qualification as “highly controversial” to successfully argue before a federal appeals court that the Army Corps should have completed a more in-depth NEPA analysis. That factor could not be considered under the Trump NEPA rule.

Brown noted that her colleagues had successfully argued cases in which an agency should have completed an environmental impact statement based on one of those significance factors. But once the decision was sent back to the agency, it was operating under the new set of Trump-era rules that no longer required a deeper analysis.

One wrinkle is the Trump regulation gives agencies the option of choosing which set of rules to follow, Brown said.

“This is where it gets confusing,” said Brown. “The agency is not clear and does not specifically say under which set of regulations they were proceeding. So it’s totally ambiguous to everybody.”

Another problem, she said, is the 2020 rule’s removal of the definition for cumulative effects of a project, which has been a key driver of lawsuits aimed at curbing climate and other environmental impacts of oil and gas infrastructure.

“We still need [the Trump] rules to go away one way or another,” said Brown.

That could be achieved by a 4th Circuit ruling allowing the Southern Environmental Law Center’s case to proceed in federal district court in Virginia — or the revival of another lawsuit against the Trump NEPA overhaul, she said.

Or it could be “CEQ coming out with a rule that puts us back in a posture similar to the 1978 regulations, perhaps with some improvements,” Brown said.

Meyer of the Southern Environmental Law Center noted that CEQ itself has stopped defending the Trump NEPA overhaul now that the Biden administration has begun working on its own revisions to the rules.

The changes include returning to the 1978 definition of “purpose and need” for a project. That section of NEPA review outlines why a project is being built and addresses reasonable alternative designs.

The Biden revisions also eliminated a provision of the 2020 rule that stated agencies couldn’t pursue more stringent review than what was outlined in the CEQ regulation. Finally, the Phase 1 rule returned to the prior definitions of direct and indirect effects and cumulative impacts.

Trade associations representing the oil and gas industry — along with road builders, farm bureaus and the U.S. Chamber of Commerce — have backed the Trump rule and argued that environmental groups lack standing to challenge it. Despite filing nearly 1,000 pages of court documents, critics failed “to demonstrate a single practical or concrete injury that they will suffer as a result of the 2020 rule,” the energy industry attorneys wrote in one brief.

Oil and gas industry lawyers said the Trump rule clarified the proper scope of NEPA reviews, “facilitates coordination for reviews involving more than one agency,” and identified page and time limits for reviews.

But, they added, “none of that has any direct effect on the environment. To say otherwise is to speculate that in some unknown future federal action, an unknown agency will make an unknown choice about a project that it would otherwise not have made if it only had considered some unknown datum that it failed to consider because of the changes in the 2020 rule.”

Industry attorneys called environmentalists’ arguments against the Trump NEPA overhaul “precisely the kind of ‘attenuated chain’ of possibilities that this court and the Supreme Court have held, time and again, cannot support standing.”

But Meyer of the Southern Environmental Law Center emphasized the importance of returning to the preexisting NEPA implementing standards that had been in place for decades before Trump came to power.

“It’s really important to get a clear legal ruling on the fact that this rule-making was not done legally, and those rules are not the legal rules,” Meyer said.

“And if CEQ wants to make changes of its own now,” Meyer added, “it needs to do so from the base point of the 1978 regulations.”

The 4th Circuit will hear oral arguments in the case at 9:30 a.m. Wednesday.