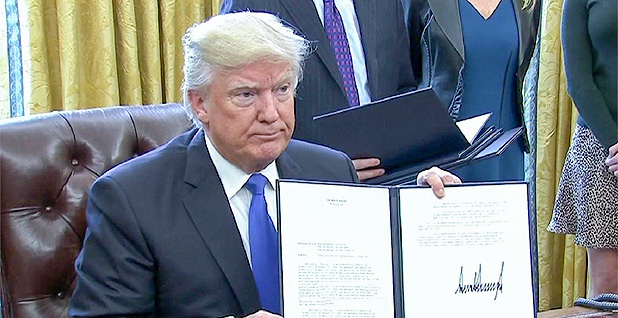 The Keystone XL pipeline hit another legal snag last night after a federal court ordered the Trump administration to take a closer look at environmental impacts.

The U.S. District Court for the District of Montana ruled that the State Department must conduct a fresh analysis of the contentious oil pipeline’s new route through Nebraska.

The agency approved a critical cross-border permit for Keystone XL shortly after President Trump took office, but Nebraska state regulators later in 2017 approved a revised route for the Canada-to-U.S. project.

The State Department had argued that the route change did not require the agency to revisit the 2014 National Environmental Policy Act analysis underpinning the cross-border permit because it had already been issued. The Montana court disagreed.

Environmental groups opposed to the pipeline cheered the decision, saying it clouds the pipeline’s future.

"This proposed project has been stalled for nearly a decade because it would be all risk and no reward, and despite the Trump administration’s efforts, they cannot force this dirty tar sands pipeline on the American people," Sierra Club attorney Doug Hayes said in a statement. "It’s time for TransCanada to give up on their Keystone XL pipe dream."

TransCanada has previously said it is still securing shippers for the pipeline but has gotten strong interest and is eager to move forward.

The State Department has actually already completed one additional study of the alternative route, but it did so to support pending permitting decisions by the Bureau of Land Management and the Army Corps of Engineers, which have authority over public land rights of way and waterway crossings, respectively.

That analysis is currently open for public comment (Energywire, July 31).

It’s unclear to what extent the agency can use that supplemental review to satisfy the new district court order. The decision requires the government to propose a schedule for updating its environmental analysis "that allows appropriate review before TransCanada’s planned construction activities."

State Department officials were unable to comment on the ruling last night. Pipeline developer TransCanada Corp. said it was reviewing the decision.

The company last week told the court that it planned to start pipeline construction in the second quarter of 2019. It hoped to begin tunneling over two major rivers as early as January (Energywire, Aug. 9).

"The Court will consider further remedies if circumstances change that do not allow review of the supplemental EIS before TransCanada’s planned construction activities," Morris wrote yesterday.

TransCanada first applied for a cross-border permit for Keystone XL in 2008. After multiple rounds of environmental review, the Obama administration rejected the project in 2015. Trump moved to reverse that decision immediately after taking office.