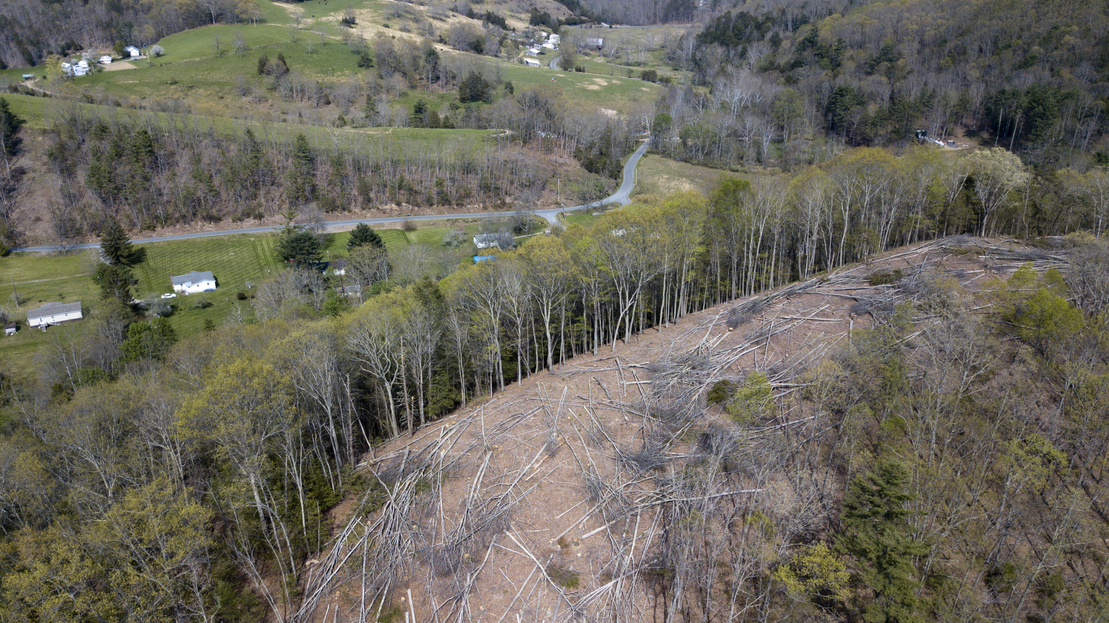 This 2018 photo shows a section of downed trees atop a ridge near homes along the route of the proposed Mountain Valley pipeline in Lindside, W.Va. AP Photo/Steve Helber

A three-judge panel with a history of tossing out permits for the Mountain Valley pipeline appeared ready Tuesday to reject yet another approval for the natural gas project.

During oral arguments, the 4th U.S. Circuit Court of Appeals analyzed a water permit certification for the pipeline and questioned whether the West Virginia Department of Environmental Protection had done enough to protect the state’s waterways from sedimentation. But the judges seemed to stop short of overturning the permit entirely.

“How difficult would it be if we send it back to them to fix it?” asked Judge James Wynn, appearing to consider sending the permit back to West Virginia DEP.

“Maybe I’ve just been here too long,” said the judge, an Obama pick. “[We] send this back; they go into a room and then enter these additional things in the record — does it cure it?”

The embattled Mountain Valley pipeline has been the subject of a litany of lawsuits over its federal permits and has become a political symbol in Washington of the need to overhaul how major federal projects are approved and litigated. The pipeline, designed to carry gas 300 miles through West Virginia and Virginia, recently announced plans to pull back on an extension of the project into North Carolina.

Appalachian Mountain Advocates attorney Derek Teaney, who represented the Sierra Club and other environmental challengers, said Tuesday that their complaint about the state water certification for Mountain Valley was not about a harmless agency error and called for the permit to be scrapped instead of sent back to state regulators.

“We need to know what they are going to do so these violations don’t happen again,” he said.

The environmental groups sued West Virginia DEP over its December 2021 certification that the Mountain Valley pipeline complied with state water quality standards under Section 401 of the Clean Water Act.

The challenge to the approval comes after the 4th Circuit had previously blocked the pipeline developer from using a general water permit called Nationwide Permit 12 to conduct dredge-and-fill activities across waterways in the path of the pipeline.

Teaney told the 4th Circuit on Tuesday that the West Virginia DEP had improperly relied on Mountain Valley’s compliance with a separate oil and gas construction stormwater permit to ensure that the project met water quality standards, but the state agency had not made stormwater permit compliance a condition of 401 certification.

He noted that the stormwater permit did not regulate in-stream construction activity and could not therefore fully protect the state’s waterways.

Mountain Valley had mostly repackaged existing conditions detailed in a range of regulatory documents into a single restoration work plan — rather than detailing new requirements that could prevent future violations, said Teaney.

Those conditions had resulted in more than 100 violations, Thacker noted. She pressed West Virginia Solicitor General Lindsay See on how the conditions could be considered protective.

“We have to look at the past as a reasonable predictor of the future,” Thacker said.

See defended West Virginia’s statements that permit violations from the pipeline were not surprising, given the complexity of the project.

“The overwhelming majority of violations were permit violations that had no aquatic effects,” she said.

Later in the hearing, the judges pressed Mountain Valley attorney George Sibley, a partner at Hunton Andrews Kurth LLP, to clarify what obligations the pipeline developer was under to control construction activities while working within waterways.

Wynn asked about inconsistencies between the record in the case and Mountain Valley’s brief on whether or not EPA’s stormwater guidelines regulate in-stream construction.

“I’m not trying to trap you in anything. I’m just asking for the facts,” said Wynn. “We typically don’t like inconsistency before the court.”

West Virginia DEP had acted to address water quality violations, which is what the court is tasked with considering, Sibley said. The question is not whether the agency went as far as the court would have liked, he continued.

“The agency might have done more to address that, but that does not render the decision arbitrary and capricious,” Sibley said.

An unfavorable ruling from the 4th Circuit on the West Virginia water certification would deal a significant blow to the Mountain Valley project.

The pipeline developer had unsuccessfully called for a random judge assignment in the case after the company suffered about a dozen legal losses handed down by the same three judges that heard Tuesday’s case.

The pipeline company argued that Wynn, Thacker and the panel’s third member — Chief Judge Roger Gregory, a Clinton and George W. Bush pick — had already overturned key permits for the project. Mountain Valley said the judges’ repeated rejections of approvals for the pipeline gave the appearance that the legal process was “rigged” against the project (Energywire, June 23).

The judges previously blocked approvals for the project from the Fish and Wildlife Service because of the risks to endangered fish species and tossed out permits from the Bureau of Land Management and the Forest Service for the pipeline to cross the Jefferson National Forest in Virginia.

The agencies have yet to reissue those permits.

The 4th Circuit judges’ track record on the pipeline appeared even to strike a nerve in Congress, where West Virginia Sen. Joe Manchin (D) had proposed — and Republican lawmakers had backed — permitting reform that would require the random assignment of federal judges in permitting cases (Energywire, Aug. 4)

Amid federal permitting challenges for the main section of the project through West Virginia and Virginia, Mountain Valley is also currently pulling back on its plans to build a 75-mile extension in North Carolina. Last week, the developers informed a federal district court in North Carolina it was no longer pursuing eminent domain cases against properties in the pipeline’s path (Energwire, Oct. 24).

The company said in a statement it was instead focusing on completing the main section of the pipeline.