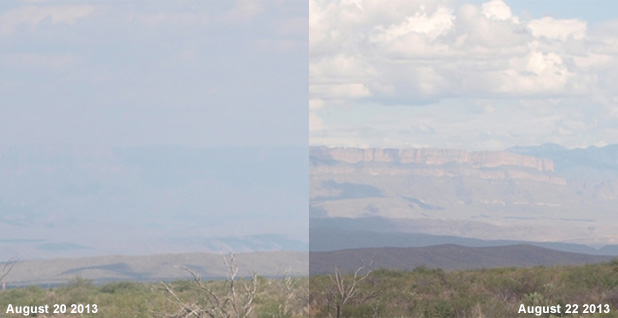 The U.S. District Court for the District of Columbia yesterday rejected an eleventh-hour bid by the Trump administration to set aside an upcoming deadline to submit a cleanup plan for Texas to meet haze reduction requirements.

The plan is required under a 2012 consent decree reached after environmentalists challenged EPA for dragging its feet on addressing Texas pollution when the state failed to submit its own cleanup plan under the agency’s regional haze program.

The Clean Air Act program, which aims to restore visibility to national parks and wilderness areas across the country, requires EPA to craft a federal implementation plan if a state declines to create its own. After a series of delays and extensions, EPA’s plan for Texas was due Sept. 9.

In an about-face last Friday, government lawyers asked the district court to push back the deadline. EPA wanted to give Texas more time to come up with its own approach to meeting the haze standards.

In court filings, the agency said state officials have a better working relationship with the current administration and should be given the chance to work on their own approach — an intrastate trading program — to reduce pollution (Greenwire, Aug. 21).

"This is not the sort of significant change in circumstance that would warrant relief," she wrote. "Texas has been under the statutory obligation to comply with the Clean Air Act since at least 2007, and it has been on notice of EPA’s finding that it had failed to comply with the requirement to submit a state implementation plan since 2009.

"So there has been quite a period of time during which ‘cooperative federalism’ could take hold," she added.

She also noted that Texas regulators’ proposal of an intrastate trading program appeared to be merely "conceptual" at this time.

"These bare bones of a schedule leave the Court with little assurance that the work will be accomplished," Jackson wrote.

Environmental groups that sued over EPA’s inaction in 2011 celebrated the court’s decision.

"Today’s decision is a win for the region’s population, national parks, public health and wildlife that for too long have been put at risk from the capricious and utterly unnecessary delay in reducing Texas’s air pollution," National Parks Conservation Association Clean Air Program Director Stephanie Kodish said in a statement.

An EPA spokeswoman said the agency is "reviewing the decision to determine next steps."