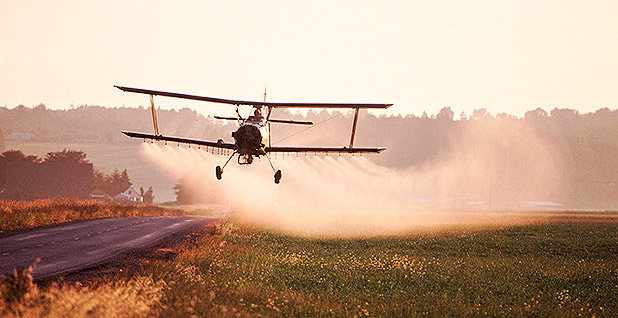 In a major win for environmentalists, a federal court ordered EPA today to revoke all tolerances and cancel all registrations for the heavily used farm chemical chlorpyrifos.

The 9th U.S. Circuit Court of Appeals issued a split 2-1 opinion finding that the agency had failed to explain its decision last year to reject a proposed ban on the pesticide after past assessments identified health risks.

The court instructed EPA to end its approval of the pesticide within 60 days.

"There was no justification for the EPA’s decision in its 2017 order to maintain a tolerance for chlorpyrifos in the face of scientific evidence that its residue on food causes neurodevelopmental damage to children," the majority opinion said.

Judge Jed Rakoff of the U.S. District Court for the Southern District of New York, who was sitting in on the 9th Circuit for the case, wrote the opinion. Circuit Judge Jacqueline Nguyen joined the decision, while Judge Ferdinand Fernandez dissented.

Environmentalists have been urging EPA to end the pesticide’s use in agriculture for more than a decade. The compound has been banned indoors since 2000 but is still commonly used in farming. More than half the apples grown in the United States are treated with it, though Hawaii earlier this year became the first state to ban its use.

But the 9th Circuit ordered EPA to decide whether to impose the ban by March 2017, leaving the final decision to the Trump administration. That month, former EPA Administrator Scott Pruitt announced that the agency would reject the proposed ban. Under Pruitt, EPA also decided to hold off on making a final determination on whether to revoke food tolerances for the pesticide until October 2022 (Greenwire, March 30, 2017).

With a coalition of states intervening in their favor, environmentalists and farmworker groups took the issue back to the 9th Circuit, where EPA argued the court couldn’t hear the case while the agency was still considering formal administrative objections to the March 2017 decision.

But at oral arguments last month, both Rakoff and Nguyen appeared frustrated at EPA’s foot-dragging in regulating the pesticide (Greenwire, July 10).

"These cases are never simple. And it’s a complex record. And we recognize that. But it’s been going on for years now," said Nguyen, an Obama appointee. "How long can EPA sit on this?"

In today’s decision vacating the March 2017 order, Rakoff wrote that the Federal Food, Drug and Cosmetic Act does not "clearly state" that EPA must respond to administrative objections before court review.

He slammed EPA’s "utter failure" to respond to the green groups’ objections more than a year after the order overturning the proposed ban. At arguments, an attorney representing EPA said that it would be another year before the agency could complete that process.

By not taking action on chlorpyrifos, EPA violated both the FFDCA and Federal Insecticide, Fungicide and Rodenticide Act (FIFRA), Rakoff wrote.

The judge said EPA has documented likely adverse effects of chlopryrifos residues on foods on infants and children for nearly two decades. EPA cannot "refuse to act" because that evidence may be possibly contradicted in the future, he said.

"In such circumstances, federal law commands that the EPA ban such a pesticide from use. … Yet, over the past decade and more, the EPA has stalled on banning chlorpyrifos," wrote Rakoff, a Clinton appointee.

"If Congress’s statutory mandates are to mean anything," Rakoff added, "the time has come to put a stop to this patent evasion."

Former Obama EPA official Joseph Goffman said the court agreed with environmentalists that the record showed EPA had a strong case for withdrawing the pesticide’s registration and tolerances.

"The court was calling out the EPA for a problem that it created itself by ignoring its own record," said Goffman, who is now executive director of Harvard Law School’s Environmental Law Program.

Fernandez, a George H.W. Bush appointee, dissented. He agreed with EPA that the 9th Circuit lacked jurisdiction to take up the case and that the agency must complete the administrative objections process before the court could consider the legality of the March 2017 order.

Environmentalists and their allies cheered the order to revoke the pesticide’s approvals.

"Great news in preventing this highly toxic pesticide linked to brain damage from ending up on our fruits and vegetables," tweeted Maryland Attorney General Brian Frosh (D), who had intervened in the litigation on behalf of the environmentalists.

"Under this administration, apparently it takes judges to force our public agencies to stand up to corporate interests and do their jobs," she said.

The Trump administration could appeal the ruling. A spokesman said the Justice Department is reviewing the decision.

"We hope that after review of the decision EPA will consider all avenues of appeal," said Jay Vroom, president and CEO of CropLife America, which represents pesticide manufacturers. "We continue to support growers and to work with them to ensure they have the tools needed to continue producing safe and affordable food."

No agribusiness groups or pesticide makers formally intervened in the case on behalf of EPA. Dow Agrosciences LLC, which manufactures chlorpyrifos, earlier this year filed an amicus brief arguing that the science on the pesticide is "inclusive" and that epidemiology studies linking it to adverse health effects are "fraught with scientific deficiencies."

Dow did not respond for a request for comment on the 9th Circuit’s ruling.

Goffman said the decision could signal future court losses for EPA and the Trump administration. He said judges will continue to press EPA to back up its actions in the administrative record and with science.

"This seems to be an example of where the agency, or at least the political leadership at the agency, knew what its preferred result was and did selective ignoring of the record in order to get to that result," he said.