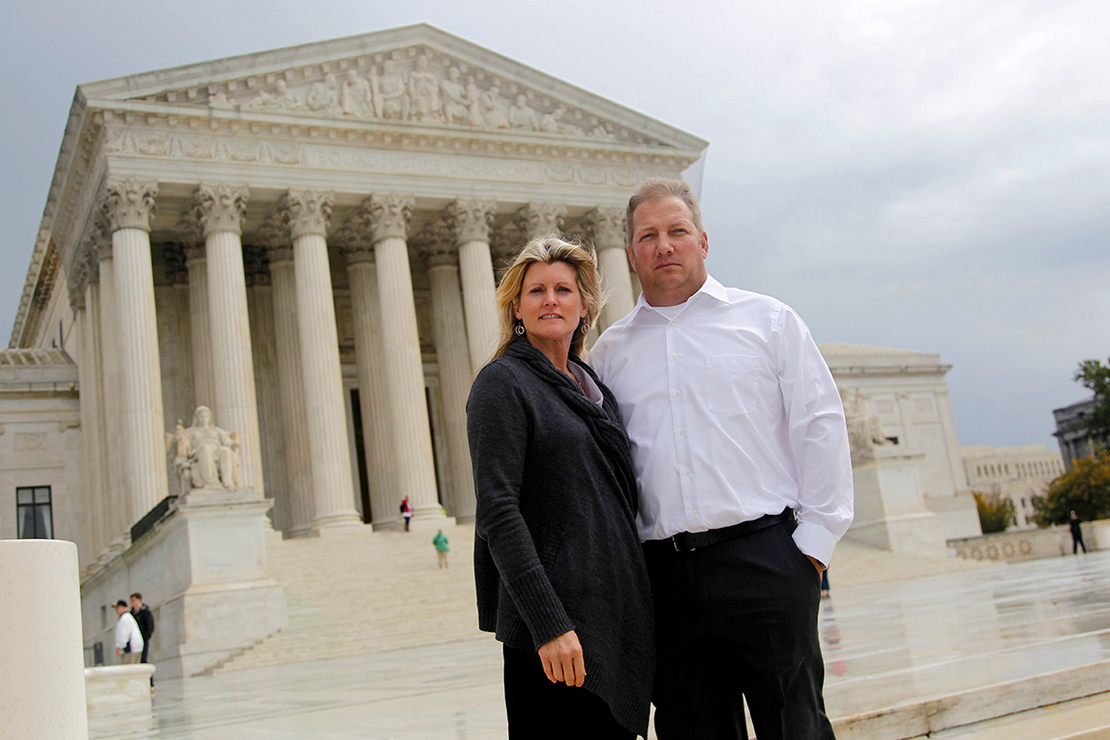 Mike and Chantell Sackett of Priest Lake, Idaho, pose in front of the Supreme Court in 2011. The Idaho couple objected to a 2007 EPA order that blocked construction of their new home near a scenic lake and threatened fines of more than $30,000 a day. Haraz N. Ghanbari/AP Photo/File

A federal appeals court today rejected a long-percolating challenge to the scope of the Clean Water Act, setting the stage for a Supreme Court showdown.

The 9th U.S. Circuit Court of Appeals denied Mike and Chantell Sackett’s arguments that EPA erred when it determined that their property near Priest Lake, Idaho, contained wetlands covered by the Clean Water Act.

Friedland noted that the Sacketts’ 0.63-acre property, which they purchased in 2004, is 300 feet from Priest Lake, a traditionally navigable water. She found that the property is adjacent to a tributary and other wetlands, qualifying for Clean Water Act jurisdiction, as EPA originally found.

“It is clear that the requirements of the Kennedy concurrence and the applicable regulations are satisfied here,” Friedland wrote. “The record plainly supports EPA’s conclusion that the wetlands on the Sacketts’ property are adjacent to a jurisdictional tributary and that, together with the similarly situated Kalispell Bay Fen, they have a significant nexus to Priest Lake, a traditional navigable water.”

The scope of Clean Water Act jurisdiction has been a legal headache for EPA for decades.

The Obama administration, for example, issued a regulation based on Kennedy’s opinion, only to have it replaced by a Trump EPA rule centered on Scalia’s.

President Biden’s EPA is pressing forward with its own, which will almost certainly be more far-reaching than its Trump-era predecessor.

Friedland’s opinion, however, sidesteps the whipsaw of regulations, instead focusing on the key legal issue, and in so doing teed it up for the Supreme Court.

“This will be appealed to the Supreme Court; you can bet your firstborn child on the fact that PLF is going to file a cert petition as soon as they possibly can,” said Mark Ryan, a former EPA Office of Water attorney.

Ryan said he believed the ruling was the outcome the Pacific Legal Foundation was seeking, although the group didn’t expect to succeed in the 9th Circuit, which affirmed a lower court decision.

He added that EPA’s goal was probably to avoid this situation.

Tony Francois of the conservative Pacific Legal Foundation, which represents the Sacketts, said he is still reviewing the decision and will confer with the Sacketts.

“We think that this decision is erroneous,” he said in an email, “and will be assessing the best course forward to free the Sacketts’ property from EPA’s illegal assertion of Clean Water Act authority over it.”

Friedland, an Obama appointee, was joined on the unanimous panel by Judge Ronald Gould, a Clinton appointee, and federal district Judge Jill Otake, who was nominated by President Trump and sat on the panel by designation.

The ruling will also put pressure on EPA to move as quickly as possible to issue its own regulation before the Supreme Court, with its 6-3 conservative majority, can take up the case (Greenwire, April 28).

Ryan, the former EPA attorney, said the 9th Circuit ruling will likely “put the fire to their feet” in proposing a new rule so they can argue they deserve deference from the high court.

“It’s conceivable EPA could get their rule out,” he said, “and I suspect this is going to be a nice impetus for them to do so.”

Correction: This story previously incorrectly stated that the Biden EPA has rescinded the Trump EPA’s Waters of the U.S. rule.