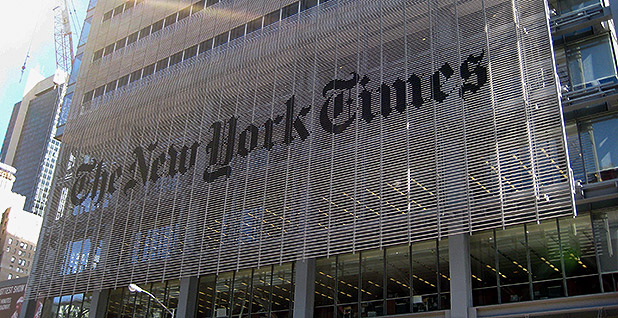 A federal judge ruled in favor of the New York Times Co. in a defamation case. Wally Gobetz/Flickr

A federal judge yesterday ruled in favor of the New York Times Co. — and the role of the Fourth Estate more broadly — in a defamation case brought by University of Florida horticultural sciences professor Kevin Folta.

"In today’s world of ‘fake news’ and near-constant attacks on the traditional media, this Court is especially sensitive to upholding the legal protections that enable the press to act effectively in its essential task of policing the government," wrote Judge Mark Walker of the U.S. District Court for the Northern District of Florida.

Walker went on to grant summary judgment to the newspaper company and Eric Lipton, a three-time Pulitzer Prize-winning investigative reporter at The New York Times who was also named in the professor’s lawsuit.

At issue was a 2015 article by Lipton about how seed producer Monsanto Co. and other biotech companies worked with Folta and other academics to fight efforts to more strictly regulate genetically modified seeds. The article was based in part on emails between Folta and industry representatives that were obtained via state records requests and an interview the professor did with Lipton.

Folta argued in an earlier court filing that his email shouldn’t have been considered "public records" because he had a "sort of side-relationship" with industry so they were not sent as part of his official business at the university. The emails, he added, were not "intended to perpetuate, communicate, or formalize knowledge of some type."

Walker, an Obama appointee, was unconvinced.

Folta’s "theory of public records would exclude the vast majority of emails between public employees and outside individuals," the judge wrote. "In today’s virtual world, where almost all business is conducted electronically, this conclusion is absurd."

Walker also evaluated whether Lipton was "fair and accurate" in his use of the emails. Folta objected to over 30 specific statements in the 3,000-word story, which ran on the front page of a Sunday edition of the paper. The judge determined they raised five questions: whether Lipton was "substantially accurate," negatively portrayed him, went beyond the evidence, omitted favorable evidence or ran unsupported opinions.

In every instance, Walker argued Lipton had either taken the necessary journalistic steps to avoid defaming Folta or that "an article’s negative portrayal of an individual is not grounds for a defamation action."

At the same time, the judge acknowledged that Folta may not have advocated for the biotech industry mainly because of the money it provided to him, as the story suggested.

Such a ruling, Walker reasoned, "would open the door to far less meritorious suits by far less scrupulous plaintiffs, and it would contribute to the ongoing chipping-away of the rights and privileges necessary to the press’s ability to play its intended role as government watchdog. This Court will not do so."

The New York Times Co., which was represented by the Florida firm Thomas & LoCicero PL, celebrated the outcome.

"We were very pleased to see Judge Walker’s decision," David McCraw, the company’s vice president and deputy general counsel, said in an email. "He understood not only that our story was a fair and accurate account of an important issue, but acknowledged the important role that the courts play in making sure that news organizations have the freedom to report the news that citizens depend on."

Asked to comment on the judgment and any potential plans for future legal action, Folta said in an email, "There is a ton to talk about."

But he added, "Unfortunately I have not even discussed this with my attorneys and can offer no insight at this time."