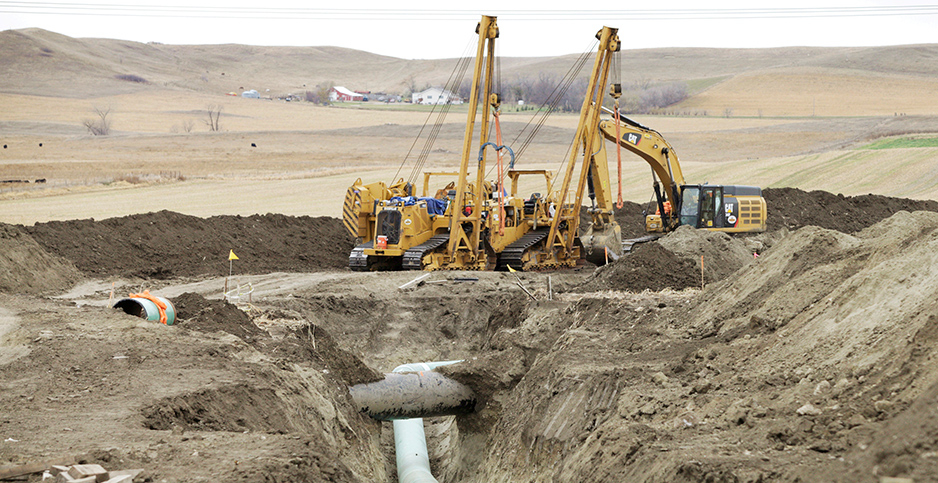 Construction equipment sits near a Dakota Access pipeline construction site off County Road 135 near the town of Cannon Ball, N.D., in 2016. A federal court has ruled that the Army Corps must do an environmental impact statement, but the pipeline won't be shut down in the meantime. Josh Morgan/REUTERS/Newscom

A federal appeals court declined today to reinstate an easement for the Dakota Access pipeline in a big win for the Standing Rock Sioux Tribe.

The decision leaves the project vulnerable to being shut down by President Biden, who last week revoked a permit to allow the contentious Keystone XL pipeline to cross the U.S.-Canada border.

On Dakota Access, the U.S. Court of Appeals for the District of Columbia Circuit upheld a lower court’s decision to ax the Army Corps of Engineers’ approval for the pipeline to cross beneath Lake Oahe — a reservoir on the Missouri River in South Dakota — after finding that the agency’s analysis of the risk of potential oil spills and leaks violated the National Environmental Policy Act.

But the three-judge panel declined to halt the flow of oil through the pipeline.

Under the Trump administration, the Army Corps had let the pipeline remain operational even without the easement in place. The 1,200-mile pipeline carries half a million gallons of crude a day between North Dakota and Illinois.

"We agree with the district court that the Corps acted unlawfully, and we affirm the court’s order vacating the easement while the Corps prepares an environmental impact statement," Judge David Tatel wrote in the opinion for the court. "But we reverse the court’s order to the extent it directed that the pipeline be shut down and emptied of oil."

Judge James Boasberg for the U.S. District Court for the District of Columbia had sought to temporarily shut down and drain the project while the Army Corps redid its analysis of its crossing beneath the artificial reservoir.

The D.C. Circuit had stepped in last August to block the order from Boasberg, an Obama appointee, earlier last year as it considered the merits of the case (E&E News PM, Aug. 5, 2020).

The panel agreed that the Army Corps’ decision qualified as "highly controversial" under NEPA, citing tribes’ concerns that the pipeline developers’ leak detection system was inadequate and that it had relied on general pipeline safety data rather than Energy Transfer Partners LP’s own safety record.

The tribes had also warned that the Army Corps had not adequately considered the challenges of addressing spills in winter conditions or analyzed the impact of a "worst case scenario."

"The Tribes’ unique role and their government-to-government relationship with the United States demand that their criticisms be treated with appropriate solicitude," wrote Tatel, a Clinton appointee.

While the Army Corps and Energy Transfer had held that the risk of major problems was low, the court warned of the "very significant" consequences to future development of exempting such a "vast category of projects" from more rigorous environmental analyses under NEPA.

Although the panel declined to halt operation of the pipeline, the court suggested that the Army Corps may be obligated either by law or its own regulations to shutter the pipeline on its own.

"But how and on what terms the Corps will enforce its property rights is, absent a properly issued injunction, a matter for the Corps to consider in the first instance, though we would expect it to decide promptly," the court wrote.

Energy Transfer did not return a request for comment.

The decision drew cheers from pipeline foes who had been fighting the project in court for four years.

"We are pleased that the D.C. Circuit affirmed the necessity of a full environmental review, and we look forward to showing the U.S. Army Corps of Engineers why this pipeline is too dangerous to operate," Standing Rock Sioux Tribal Chairman Mike Faith said in a statement.

Jan Hasselman, a staff attorney with environmental group Earthjustice, called today’s court decision "another milestone in our four-year legal battle on behalf of the Standing Rock Sioux to shut down this pipeline."

"This decision affirms what the Tribe has been saying from the start," Hasselman said in an email. "This pipeline is a threat to clean water and Indigenous sovereignty, and we must examine the consequences it brings for the future."