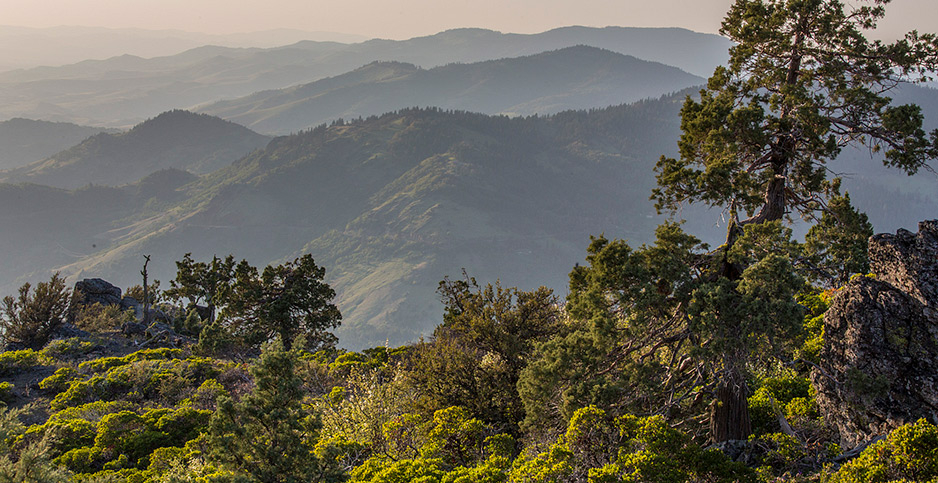 The Cascade-Siskiyou National Monument along the border of California and Oregon. BLM Oregon & Washington/Flickr

A federal judge has ruled that President Obama overreached when he expanded the Cascade-Siskiyou National Monument and he did not have the authority to limit timber harvesting on 40,000 acres of former railroad lands — splitting from another court’s prior ruling on the matter.

In a decision published yesterday, U.S. District Court for the Distric of Columbia Judge Richard Leon likewise found "no doubt" that the 2016 resource management plans for the 100,000-acre site violated the Oregon and California (O&C) Revested Lands Act.

"The O&C Act plainly requires that timber grown on O&C land ‘be sold, cut, and removed in conformity with the [principle] of sustained yield,’" wrote Leon, a George W. Bush appointee.

The ruling is a victory for the American Forest Resource Council (AFRC), which challenged Obama’s decision to expand the monument as well as Bureau of Land Management restrictions on timber harvest.

"These are major wins for the rule of law and rational, science-based forest management," AFRC President Travis Joseph said in a statement.

But the decision sets up a potential judicial showdown over the future of the monument, which straddles the Oregon-California border.

In that case, District Judge Michael McShane found that BLM had previously opted to legally reduce timber harvest on the disputed lands — only 17,000 acres produce timber — and that Obama’s decision to expand the monument "presents no irreconcilable conflict with the O&C Act" (Greenwire, Sept. 6).

The plaintiffs in that case appealed the ruling to the 9th U.S. Circuit Court of Appeals earlier this month and are required to file their opening brief by Feb. 10.

Mark Squillace, a natural resources law professor at the University of Colorado, said a future review could focus on the judges’ opposing interpretations of the O&C Act’s statutory requirements.

He pointed to the language in the act that requires "permanent forest production" but also mandates the "economic stability of local communities and industries, and providing recreational facilities."

"The first part of this section seems to support the [plaintiffs’] claims but the last part suggests that these lands should be managed for a wide range of uses, and that timber production was not intended as the exclusive use of these lands," Squillace said in an email.

Given the disparate court rulings, it remains to be seen whether allowances for timber harvest within the monument will change in the near future.

In his ruling, Leon set a 30-day deadline for new briefings that outline the "appropriate remedy" to the resource management plan violations of the O&C Act.

But Joseph told E&E News that he expects the Trump administration to act quickly.

"In regards to the expansion of the Cascade Siskiyou National Monument, we do expect Interior and the administration to immediately follow the court’s decision that Proclamation 9564 ‘is invalid and unenforceable as applied to the land subject to the O&C Act,’" Joseph wrote in an email, referring to Obama’s presidential proclamation expanding the monument.

Interior spokeswoman Melissa Brown said: "The court found the actions by President Obama and his administration illegal. The department is reviewing the decision and will ultimately follow the law."

Earthjustice attorney Kristen Boyles said an appeal will be filed on the D.C. ruling.

"The Cascade-Siskiyou National Monument is a place of extraordinary biodiversity — and it is federal public land that belongs to all of us, not just a handful of timber companies," Boyles told E&E News. "The Oregon district court upheld the monument expansion earlier this year; we disagree with yesterday’s D.C. district court and will appeal."

She added that environmentalists will be monitoring Interior and BLM to see how the agencies respond to the ruling.

"I wouldn’t want them to take any actions on the ground to undermine the monument status," Boyles said. "This does not mean the monument is gone."

President Clinton established the Cascade-Siskiyou site in 2000, designating 53,000 acres as the first national monument created to protect biodiversity. Obama’s additions during his final days in office in early 2017 expanded the monument to its current size.

Former Interior Secretary Ryan Zinke asked President Trump to excise 17,000 acres of timberland from the monument in late 2017, but the administration has not acted on that recommendation (E&E Daily, Dec. 5, 2017).