Court to decide fate of federal fracking authority — or not 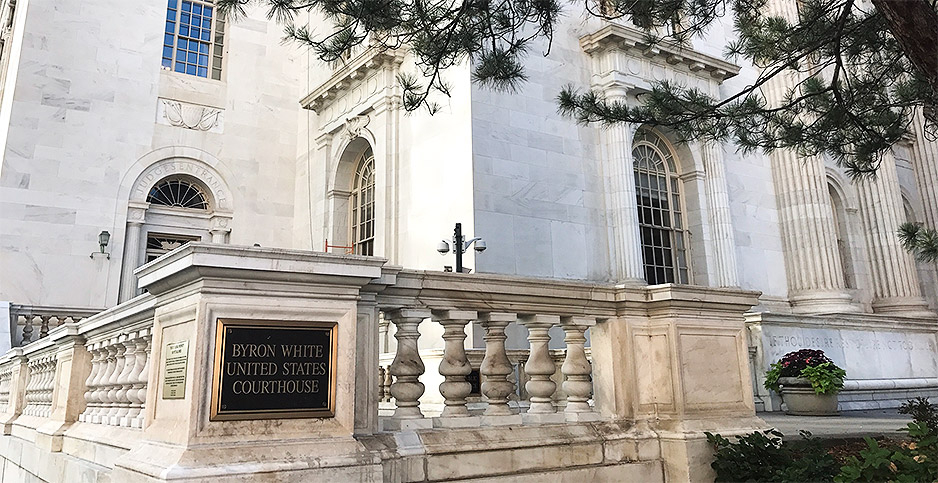 DENVER — A panel of judges spent yesterday morning grappling with a major legal issue affecting federal oversight of oil and gas development: Does the government have authority to regulate hydraulic fracturing?

But whether the court will ever issue an opinion on the matter remains an open question.

In an unusual twist of legal procedure, the 10th U.S. Circuit Court of Appeals heard oral arguments in litigation that it may decide to put on ice.

At issue is the Obama administration’s rule for fracking on public and tribal lands. A lower court found that the federal government lacks authority to regulate fracking, and the question has been on appeal at the 10th Circuit since last year. Now, the Trump administration is rolling back the rule and wants to freeze the case in the meantime.

The judges yesterday heard arguments on both the fundamental authority question and the procedural issue of whether the case should be paused.

All three judges on the panel expressed skepticism about freezing the case indefinitely while BLM goes through a new rulemaking process to roll back the regulation (E&E News PM, July 27).

"What’s the incentive to move quickly?" asked Judge Harris Hartz, a George W. Bush appointee. He noted that if the case is paused, it could be years before the question of BLM’s fracking authority is answered.

Government lawyers stressed that unwinding the fracking rule is a Trump administration priority, so BLM will work "expeditiously" to complete its rollback. BLM maintains that the lower court’s ruling was incorrect but says any merits decision at this time would be judicially inefficient and would interfere with the new rulemaking process.

Judge Mary Beck Briscoe, a Clinton appointee, repeatedly pushed back on that claim and appeared to be strongly in favor of resolving the question now.

"Isn’t that issue ripe, and don’t we have the duty to decide?" she asked, answering herself later: "We have an underlying decision that is on the books that is ripe for review."

At this point, the 10th Circuit may opt to put the case on hold, issue a merits decision or — less likely — dismiss the case and vacate the lower court’s ruling that the government has no fracking authority.

Judge Jerome Holmes, a George W. Bush appointee, noted that the last option could allow the 10th Circuit to address concerns about the impacts of the lower court’s ruling without inserting itself into BLM’s ongoing regulatory process.

Whose authority is it, anyway?

The judges appeared eager to delve into the merits of the case yesterday, extending argument time for several parties to allow for more discussion of the government’s jurisdiction.

The winning argument in last year’s district court decision was put forth by states challenging the rule. Wyoming, Colorado, North Dakota and Utah say the Safe Drinking Water Act (SDWA) gave U.S. EPA exclusive authority over fracking, and the Energy Policy Act of 2005 then removed that power and left it to state regulators.

Hartz questioned the breadth of the so-called fracking exemption. Noting that he was still grappling with the issue, he put forth a narrower potential reading of the statutes, musing that the SDWA may prevent agencies other than EPA from regulating fracking for water protection purposes, but may not necessarily preclude other agencies from regulating fracking to address, say, seismicity or wildlife concerns.

Wyoming Deputy Attorney General James Kaste responded that the SDWA unambiguously delegated all fracking authority to EPA. BakerHostetler attorney Mark Barron, representing the Independent Petroleum Association of America and Western Energy Alliance against the rule, noted that BLM has routinely deferred to other EPA authorities under the SDWA.

"They cannot now escape the same conclusion when it comes to non-diesel hydraulic fracturing," he said.

They argued that EPA’s SDWA authority over injection is not exclusive. Congress would have been explicit if it intended to remove the issue from BLM’s purview, they said. Mergen noted that EPA itself supported BLM’s efforts to regulate fracking when it began promulgating the rule during the Obama administration several years ago.

‘There’s no case law on this’

Tribal issues that have been largely overshadowed by the broader fracking authority question throughout the case also gained traction in court yesterday.

The Ute Indian Tribe and several others have taken issue with the fracking rule since its inception, complaining that it treats tribal lands the same as public lands. They argue that BLM lacks rulemaking authority on tribal trust lands (Energywire, July 11, 2016).

Hartz slammed government and environmental lawyers for failing to address the tribal law questions in their most recent briefs, suggesting they may have conceded the argument. Freeman argued that because the district court never issued a final decision on the tribal law issues, the 10th Circuit should avoid weighing in on them and should instead remand those issues to the lower court.

Fredericks Peebles & Morgan LLP attorney Jeffrey Rasmussen, who argued for the Utes, said he thinks the 10th Circuit is poised to decide the matter.

An answer from the appeals court would be a major development in federal Indian law. While tribes have long raised the argument that BLM lacks rulemaking authority tribal trust land, courts have not yet issued clear direction on the issue, Rasmussen said.

"There’s no case law on this, so this would be a very good one for us," he said after arguments.

A decision from the court could come down in a matter of weeks or months, depending on what issues the judges decide to tackle.

Barron, the BakerHostetler lawyer, argued that "there’s no urgency to decide" because there’s no likelihood BLM will attempt to exercise any authority over fracking in the near future.

Supporters of the fracking rule stressed that a court decision reaffirming federal authority over fracking is critical to ensuring public safety and environmental protection.

"Communities living near oil and gas facilities on public lands, both now and in the future, stand to lose if the Trump administration gets its way in the 10th Circuit," Earthworks policy advocate Aaron Mintzes said in a statement. Earthworks is one of several environmental intervenors in the case.

"No matter what new rule BLM crafts to replace the Obama administration’s rule that it proposes to rescind, the process must start from a clear baseline understanding as to what the BLM has the authority to regulate — that question will permeate any rulemaking process," said Wiseman, who has argued that her article was taken out of context by fracking rule opponents and the lower court.

"Further," she added, "the district court opinion sets erroneous precedent that could block the BLM’s duties in many areas — not just the fracking area — and already is being cited in other cases."

For now, supporters and critics of the fracking rule will be busy dealing with the next stage in the process: submitting comments on BLM’s proposal to rescind the regulation.

The agency published its proposal earlier this week, kicking off 60 days of public comment.

"IPAA is eager to turn our attention to the regulatory process as we engage with the new Administration on this issue," Dan Naatz, senior vice president for government relations and political affairs at the industry group, said in a statement.